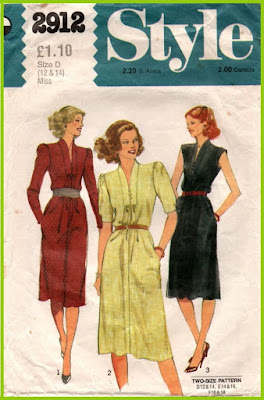 Making this up was an odd mix. On the one hand it was very straightforward: the pattern dates from 1979, the year after I started making clothes on my own in earnest, so the style of illustrations and instructions etc, were entirely familiar. On the other hand a couple of the techniques used were new to me.

I always pre-wash my fabrics, and when I was ironing this one I noticed a couple of small tears in it. Nothing major, but I did have to alter the cutting layout to work around them.


Because the stand neckine is a separate section of the dress, it was far easier to do than on other patterns I've used where it is part of the bodice front. Here it was just sewn onto the main part of the dress, then the two sections flipped inwards, and attached to the dress along the bottom. Then a facing was added to enclose all the raw edges.


The sleeves were slightly odd in that the opening had a facing rather than a placket and cuff.


Once the facing was sewn on, a small dart was stitched above the sleeve opening, and the two ends of the facing joined over that.


None of this was difficult, just different from the techniques I'm used to. It was all just a case of following the instructions. The rest was easy. Kerry of Kestrel Makes is a fan of 1970s patterns and on this evidence I can see why: there's a lot to like. No waist seams requiring complicated pattern shortening. Pockets as standard (yesssssss!). No zip. I had some Liberty buttons which I had bought for another project and not used, and which turned out to perfectly match the colour of the small roses on the fabric. I dispensed with the rouleau loops for the buttons as I felt that my fabric was a bit too thick for them, and made buttonhole-stitch loops instead.

I absolutely love the end result. It helps that the fabric feels right for the period, both in terms of colour and pattern. I also managed to find a belt which is an absurdly good colour match.


I can't help wondering why I love this dress so much. Yes, it's practical, and the sort of unfussy style that I like, but I think there's more to it. It's back to the theory that you will always like the styles you wore when you were 17. I was 15 when this pattern came out, not 17, but at some level it takes me back to a time when life didn't involve such tiresome things as tax returns and clearing leaves out of guttering!

My attempts to style the look in true 1979 fashion were scuppered by the fact that 'American Tan' tights have gone the way of Vesta curries and the test card (mourned by no-one, I imagine), but I did at least pin my hair back with combs and attempt to coax my fringe into a more period-appropriate flick.


I can see more 1970s patterns featuring in my future makes.
Posted by Black Tulip at 16:34