The Friday before last (the 18th) was the latest meeting of the Chapel Stitchers. Christine had been busy since the previous meeting, and had attached all the hands to the altar frontal.


The intention was always to have some white space between the individual hands, but some of them looked a bit disembodied by being cut off at the wrist, so we added some small pieces of fabric to fill a few of the gaps.

Ros had brought along her kneeler to show us. The dove is almost finished, and looks lovely. The next steps are designing the crosses for the sides of the kneeler, and filling in the background, which will be shaded.


The next job was to consider the colours for embroidering the hands for the communion sets. I had cut out all the the fabric pieces in the four colours required, and Kath had brought along a selection of embroidery silks, so we experimented with laying different skeins over the four stole pieces.

We started off with quite a wide range, but then we referred back to Kath's original design, and decided that a simpler colour scheme would be better. We settled for a light and dark in each of the four colours, making sure that there was enough of a contrast with the background fabric so that the colour doesn't 'sink' into it from a distance.

The hands will go on the stole and the lectern fall only (the burse and the veil will just have the cross). To keep the design consistent, we decided that one person would do both pairs of hands for each set. Louise, Sandra, Sharon and Barbara volunteered to do the embroidery.

The hands will be embroidered in long and short stitch, on the same white fabric as the altar frontal, but painted. Painting the fabric first acts as a handy guide for which colour goes where, and also means that any gaps in the stitching won't be obvious. So, the final task in a busy meeting was painting the hands. Christine had brought fabric paint and brushes, and she, Sandra and Louise painted the hands.

The next meeting is Friday 15 April at noon, in the usual room in Senate House.
Posted by Black Tulip at 13:57 No comments:

Yesterday I went to another course at Hat Works, this time on feathers.

A number of feathery items in the museum's collection had been bought out of storage for us to see.


There were several of these feathered hats, some in a better condition than others. They all consisted of a buckram base with feathers attached with glue.


The tutors, Sue Carter and Marie Thornton, had also brought along lots of examples of feather trims for us to look at.

I was amazed how this peacock feather, which had been bleached and then dyed, still retained some of its original colours.


Then it was time to have a go ourselves, designing and making a feather pad. We cut out a shape from buckram, and then selected feathers with which to cover it. This quickly proved trickier than it sounds. For a start, there are left and right feathers, depending on where on the bird they come from. Most feathers have a natural curl, and this has to be taken into account when selecting feathers for the pad. We also had to strip off the fluffier part at the bottom of the feather, and trim the quill.


Once the feathers were prepared, they had to be glued onto the buckram: a very messy job.


I was really pleased with the end result however. It goes perfectly with some spotted veiling in my stash, and I plan to make it up into a headpiece.


It took a long time to make a small pad, and we all ended up with renewed respect for the people who did this as a full-time job. I certainly don't think I'll be attempting anything like this Edwardian hat in the History of Fashion exhibition, which boasts an entire pheasant for trimming!


So that's the feathers, what about the fur? We are provided with disposable plastic aprons on Hat Works courses, but I've been thinking for a while that I wanted something less wasteful. Then I came across a remnant of this cute (mostly furry) animal print in Sew Vintage in Wells, which was perfect for the retro apron I had in mind.


I used this tutorial for the pattern, with a few alterations. In particular I changed the neck strap, making it a single piece, and angling it to make it lie better.


I found the ribbon in Stitch 45 in Malvern. As well as being a perfect match for the stripes, it's to scale as well! I think the measuring tape print makes this very much a sewing apron rather than a cooking apron. Once I'd trimmed the bib and the waist, I had just enough ribbon left to finish off the ends of the waist ties.


I wore the apron yesterday (having finished it on the train journey to Stockport!), and it did a great job of protecting my clothes from the fluff of stripped feathers. I think I'll use the remaining fabric to add a pocket though, because clothes are always improved by the addition of pockets.

A sneak peek at 'A History of Fashion'

I'm just back from my annual trip to Somerset for the wonderful Majma dance festival. As I often do, I stayed down there for the rest of the week, and one day went over to Bath.

Unfortunately the next exhibition at the Fashion Museum Bath, A History of Fashion in 100 Objects, doesn't open until 19th March. But I walked up to the Assembly Rooms anyway, thinking that I could at least look round the other rooms, and perhaps indulge in tea and cake in the café. However both rooms and café were closed for a private function. Feeling Very Grumpy Indeed, I went to reception to ask how much of the museum was open, and discovered that I could actually go round the exhibition, as it was being set up, for free! All grumpiness dissolved immediately, and off I set. 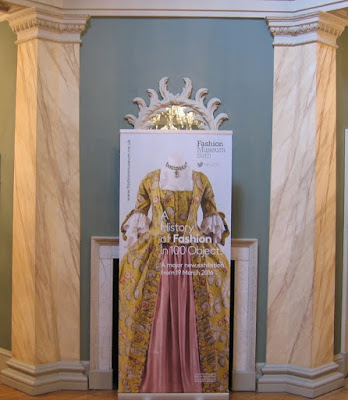 As the name suggests, the exhibition consists of 100 star objects from the Fashion Museum Bath’s collection, creating a history of fashion from 1600 to the present day. As the museum's collection contains 100,000 objects, whittling it down to just 100 must have been quite a task.

Before I launch into the photographs (and there's a lot of them), a couple of observations.

Firstly, the exhibition when I saw it was incomplete. This meant that there wasn't information on every exhibit, and that some sections weren't properly lit yet, so I couldn't take photographs. The other problem was the opposite; too much light. The information panels are illuminated rather than just printed onto card, so this led to some serious issues with reflections on the glass cases. Some reflections I was able to block by holding my coat out, and in one case I borrowed a total (and slightly bemused) stranger to stand in the way, but in some sections it was impossible to get pictures of a good enough quality to post here.

The exhibition starts with a smock decorated with bands of blackwork, followed by this amazing embroidered jacket.


From embroidered Stuart clothing, it moves on to Georgian robes.


The thistles quilted onto this petticoat suggest a Scottish link, and perhaps even Jacobite loyalties?


It isn't just about the clothes themselves; this stomacher is included to highlight the importance of pins in dress before buttons became more common.


The next case moves on to later Georgian fashions.


Although most of the exhibits are women's clothes, there is some male attire, such as this embroidered Macaroni jacket and waistcoat.


As ever with exhibitions at the Fashion Museum, the exhibits are arranged so that you can see the back of at least some of the garments.


From the brightly coloured dresses, it's a big change to the whiteness of the Regency era.

I cannot lie, I struggle to feel any love for 1830s fashions. They're just so, well, droopy, somehow. But even I quite liked these examples.


Then round the corner were two alcoves in the process of being set up (hence the sheet on the floor in the next photograph. In the first alcove was this.


The fabric is very light and gauzy. There was no information, so I don't know if it is painted or printed, but here's the bodice in more detail.


Anyone who shares The Dreamstress's views on fringe might want to avert their eyes while passing the next alcove! Unfortunately this was barely lit, so I have had to tweak the image to make it more visible - hence the slightly odd colours. Again, there was no information on dates etc.


Dotted around the exhibition are collections of accessories; the fan collection was visible in an earlier photograph. There is also a collection of nineteenth century of boots and shoes. According to a quote displayed nearby, by the 1850s coloured shoes were considered, "exceedingly vulgar", and, "white satin, black satin or kid and bronze kid are neater and more elegant".


What the writer would have made of the decoration on this pair, I can't imagine.


The next case was clearly only just beginning to be set up. The emptiness gave it a wonderful 'hall of mirrors' effect.


In this side view you can clearly see the grommets, showing that it is nowhere near laced closed on the mannequin.


Just along from the corset was this long green jacket with southache trim. Ooh, what does this remind me of? (Yes Gina, I am going to keep mentioning this from time to time, until you finally finish your beautiful Boarding Suit!!)


According to Women in the First World War, nurses' aprons were not issued with a red cross on them, so VADs had to attach their own. This would explain the slightly haphazard stitching on this example.


I've included this photograph of one of the display boards, because it was too dark to get a decent picture of the jumper itself.


On a similar theme, in the next case is dress made by the donor's mother from specially printed fabric, worn on the day of Queen Elizabeth's coronation.

Also in this case is this amazing crochet blouse, made from a pattern issued by yarn manufacturer Coats.


The small figure in the front of the case is Miss Virginia Lachasse, a fashion doll made in 1954 by the House of Lachasse, a London couture house. A complete wardrobe was created for her, and while I've seen some of the outfits in the V&A, I'd never seen the actual doll. I must admit, I found it slightly creepy.

The arrangements of the last few cases made it very difficult to take decent photographs. I was however able to get this image of a 1974 Jean Muir yellow rayon jersey dress and a circa 1982 Emmanuel ballgown. I did make something in a very similar shape to the latter, but shorter, a few years later - oh, the shame!


The exhibition finishes with some of the Dresses of the Year, and this blue woollen Roland Mouret dress.


This is the biggest exhibition I've even seen at the Fashion Museum; it takes up almost the entire museum space. It runs until 1 January 2018, so if this has whetted your appetite, there's plenty of time to see it. You can also see far better pictures of some of the exhibits in the online gallery here.
Posted by Black Tulip at 19:12 2 comments: