Unfortunately family illness means that this week's planned post about the History of Fashion in 100 Objects exhibition at the Fashion Museum Bath is going to have to wait a while. So in the meantime here's a little taste of what's to come. 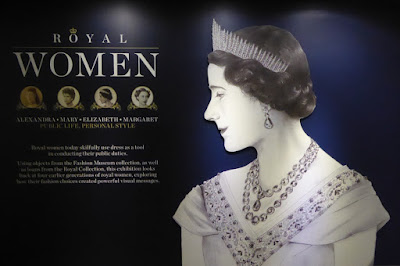 I’m just back from my annual trip to Somerset. Sadly the atrocious weather last weekend meant that I only managed to get down there in time to see the final show of the Majma dance festival, but I’ve still had a fun week, and made an exciting purchase.

Driving from the M5 to Glastonbury I passed several signs for an antiques fair at Shepton Mallet, taking place this weekend. Vintage Gal has posted about some of her fabulous finds at these fairs, so I was thrilled to discover that I could actually go to one.

There were only a few textile-related stalls, but I did still manage to find a couple of 1970s Style patterns, some vintage metal lace and two lots of hat veiling, and some lovely sparkly buttons.


And then just as I was about to leave, on one of the outdoor stalls, looking a bit sorry for itself and getting damp in the rain, I found this.


It was the case which caught my attention; I saw vintage film footage of these being moulded at last year's Plywood exhibition at the V&A. When I opened the case I found that the machine already had both a needle and a bobbin in place, so to the bemusement of the seller I threaded it up with a spare bobbin, and tried sewing round the edge of my handkerchief! It worked, I’ve wanted a hand-cranked machine for a while, and it clearly needed someone to rescue it from damp and neglect. . .


It’s quite worn in places and is clearly older than my mum’s 1953 Singer: it is plainer, and the section for the bobbins etc. has a wooden lid instead of a metal one. I guessed at 1930s because I assumed that not many were made in the 1940s - I think that the Clydebank Singer factory went over to war work. Armed with the serial number, I went online to investigate, and found this helpful site.


I was, quite simply, stunned. My 'new' machine was made in 1917! No wonder it looks a bit worse for wear. And it’s still in working order (although to be fair there’s not a lot to go wrong). Clearly Singer had never heard of the concept of built-in obsolescence.

Essentially it’s the same model as the 1953 version; which is useful as this one doesn’t have an instruction booklet.


There does seem to be a wealth of information about 99K Singers online though, so I can give it a thorough clean and tidy up. And then, of course, I want to make something with it.

Although the 99K was designed to be 'portable', this really just means 'not attached to a treadle mechanism'. One thing it is not, is light. Casually swinging the case while strolling along, à la Kate Winslet in The Dressmaker, is not going to happen!


While writing this post I realised that I now own four sewing machines. Some people might regard this as excessive. I am not one of these people. I am just unreasonably excited!
Posted by Black Tulip at 19:04 8 comments:

Email ThisBlogThis!Share to TwitterShare to FacebookShare to Pinterest
Labels: 1910s, tools and equipment

When I first looked at this pattern my initial thought was, "Hm, buttonholes down the front. Not my favourite thing". But look closely (Butterick kindly put the back views on the front of the envelope) and you can see that there is a zip fasten as well. It is a false front placket, so the only buttonholes are on the cuff of the long-sleeved version.Yay!


I'm using a thick but soft plain purple cotton for this dress, and going for long sleeves. The pattern calls for 1½" wide lace, which is attached right across the front and shaped over the bust darts.


The only lace I could only find that wide was nylon and unattractive, so I went for a braid instead. However it is only 1⅛" / 3cm wide, so I added a fifth row and changed the spacing. It took a bit of fiddling to get it so that the rows of braid don't overlap.


The braid did tend to gape away from the fabric, so I ended up sewing round each circle - fun! Then I decided that I needed to remake the front placket because I wasn't happy with it. Fortunately I had some fabric leftover, and recut the pieces with the front slightly larger than the back so that the seamline doesn't show when they are stitched together.


I've decided to go for the purple buttons rather than the cream, partly because the cream ones will look odd on the cuffs. The purple buttons do have quite long shanks though, and stick out from the placket a bit.

The collar pieces are sewn onto a band and then this is attached to the dress. I keep forgetting that the opening is at the back; I even cut the collar interfacing out on the fold as usual, and then had to split it!


So far I feel as though I have been sewing this dress forever and not got anywhere, but hopefully the end result will be worth it.
Posted by Black Tulip at 19:26 2 comments: