How to make a pleated ribbon cockade

Following on from last week's post, here are my notes on making a pleated ribbon cockade.

Any sort of reasonably firm ribbon can be used, although I wouldn't recommend starting with a slippery satin, as it would be difficult to control. For my suffragette cockade I used petersham ribbon for the outer part, and grosgrain ribbon for the inner. The difference? Both are woven with a distinctive ridge across them, but grosgrain has smooth edges, whereas petersham has distinct loops. It is the extra 'give' which these loops provide which allow petersham to be pressed into curves.

Step 1 - Start off by folding under the raw end of the ribbon, about 0.6cm / ¼". Then fold the edge over diagonally and sew along the bottom edge, through all three layers of ribbon, with small running stitches. The thread must end at the point, otherwise the next step won't work.


Step 2 - Fold the long end of the ribbon down diagonally, leaving a small gap in the centre as indicated by the arrows.


Step 3 - Fold the long section on top of the short section. This is why the gap is needed, to allow the fold to lie smoothly. Sew the two corners together with a small overcast stitch.


Fold the long end upwards, and make another small overcast stitch at the point to hold the fold in place. The ribbon will now look as it did once step 1 was completed


Keep repeating steps 2 to 5 until the cockade is as full as you want it. This would usually be about 30 points, but will be far fewer if you are using velvet ribbon as it is thicker. There is no need to sew through all the folds every time; just through the previous two or three will be enough to secure the most recent fold.

To finish off the cockade, slip the end of the ribbon through the first point. Pull it tight, sew it in place, and trim off the excess ribbon.


You can leave the cockade as it is, or press it flatter, either by hand or using a iron and press cloth.

Finally, fill the centre of the cockade with a button or bead.

You don't have to sew the pleated ribbon into a circle. This piece was so long that it would make several circles over. It has a wonderful sculptural effect, and could be stitched together to make an amazing hairpiece. 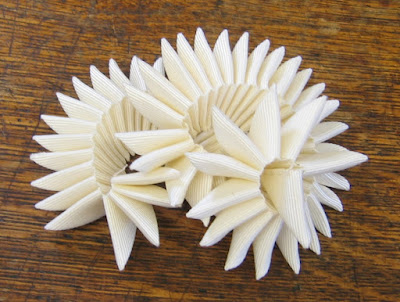 Email ThisBlogThis!Share to TwitterShare to FacebookShare to Pinterest
Labels: tutorial

Yesterday I was back at Hat Works in Stockport, for my final millinery course of 2015. It’s wonderful to have such a great resource almost on my doorstep, and I’ve loved every course I’ve done: a huge thank you to Meroe for letting me know about the courses in the first place, and to the fabulous tutors; Lorna, Marie and Sue.

This course was on making ribbon cockades. As ever, there were lots of examples for us to examine, both antique and modern.


Some were made from a single, continuous length of ribbon, while others were made up of separate components.

First of all we tried making the pleated ribbon cockades. While they look complicated, they are actually quite straightforward once you get started. I'll post a tutorial soon! (Now done, it's here.)


The black ruffled cockade above consisted of seven identical pleated sections, mounted on a scrap of buckram. Now this was tricky, especially getting the pleats right. My effort was definitely far better by the seventh section than the first!


This one was much simpler. I think that it would look great as a trim on a cloche hat.


All of the ribbon, in different widths and colours, was provided by the museum. I chose a purple for my pleated cockade, and this got me thinking. The current Historical Sew Monthly challenge is Sewing Secrets,
"Hide something in your sewing, whether it is an almost invisible mend, a secret pocket, a false fastening or front, or a concealed message (such as a political or moral allegiance)."

The notes which Marie and Sue provided included some of the historical background of cockades, including the fact that they were worn by suffragettes. The suffragette colours were purple, white and green, so I decided to build on my cockade to give it a subtle suffragette message. I made a second, smaller cockade from a narrow white ribbon, but first I painted one edge of the ribbon with green fabric paint, and then soaked in water to give a slight ombre effect. Once the cockade was made up, the green only shows at the centre folds. The two cockades are backed with a buckram scrap, and the whole thing is held together with a fabric button marked with the small letters WSPU, one of the main suffragette organisations in Britain.


The small print:
The Challenge: Sewing Secrets
What's the secret?: Suffragette sympathies. The cockade is only 10cm / 4" across, so the WSPU letters are actually tiny.
Fabric: Petersham and grosgrain ribbons, cotton for the covered button, buckram scrap
Pattern: My own
Year: Early twentieth century
Notions: Button form
How historically accurate is it? Suffragettes wore cockades, and I imagine some of them made their own, so I'd say 80%
Hours to complete: 2-3
First worn: Not yet
Total cost: None, but only because the materials were either provided on a course or from my stash
Posted by Black Tulip at 22:11 2 comments:

A couple of weeks ago I went on another course at Hat Works with Sue Carter and Marie Thornton; this one was over two days, and we learned how to block and finish a brimless felt ‘percher’ hat. We had chosen our colours beforehand, and the pre-stiffened hoods were waiting for us when we arrived.


There was also a selection of modern hat blocks for us to choose from, including button, teardrop and melon shapes. We covered our blocks in clingfilm, and got to work steaming the hoods and then stretching them over the blocks.

I had been warned beforehand that this was quite hard work, but hadn’t appreciated just how much effort was required.

Once those last pesky wrinkles at the top had been smoothed out, it was time to secure the hood to the block. This was done by pinning it to the wooden block, another job which required some oomph. Indeed I began to suspect that you will never see a milliner with bingo wings (or, for that matter, long fingernails)!


Finally, where the block had a pronounced concave curve on the underside, a strip of twisted calico was pinned in place to ensure that the hood was pressed close to the block.

The blocks were then left to dry overnight, and we had the opportunity to take a guided tour of the Hat Works machinery floor. My favourite part was the hat block maker’s workshop. This was the last block workshop in the north, and when it closed in 1976 (148 years after the firm was founded), the entire contents were donated to the museum. The master block was carved by hand, and then copied on a special machine which could also vary the size of the copies.

Among the many blocks on display in the museum was this one for the old-fashioned policeman’s helmet. At one point all of these were made in Stockport.


On Sunday we came back to find our hats nicely dried.


The next step was to take them off the blocks, which was easier said than done. After so much effort to get them into shape, we didn’t want to pull them out of shape again. Apparently a length of spiral steel boning is the ideal tool for the job, as it is flexible enough to slide between the hood and the block, and has a curved tip. The excess hood was cut off and saved for decoration, and then we had to attach either wire or a bias strip of tarlatan, depending on the block shape, to stop the hat edge from distorting. My hat required tarlatan, which was stretched and pressed into shape before being pinned on and sewn into place with large diagonal stitches. (This was also when I discovered that having the pins pointing inwards leads to very scratched hands as you sew!)


A length of petersham was then also pressed into shape and attached over the tarlatan, this time with very small stitches along the outer edge.


Once the hats were complete, it was time to think about using the leftover felt to make trimmings. As ever, Sue and Marie had brought along lots of examples to inspire us. 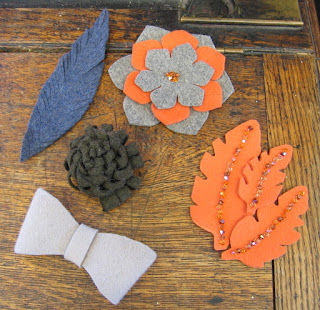 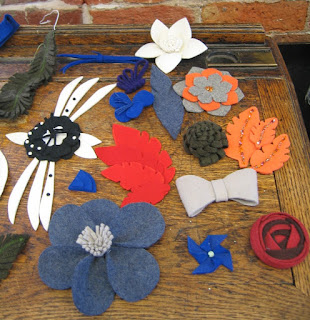 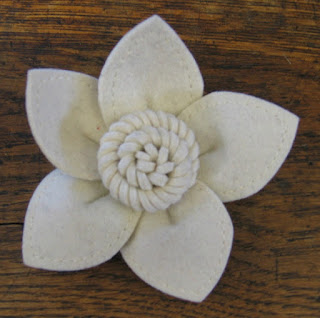 I haven’t trimmed my hat yet, because I am making it to go with a coat (as yet unmade, but I do have the fabric and the design), and I want to have the coat completed first. So here, for now, is my completed but untrimmed percher.


As ever, the course was great fun. So much so that I have bought two more hoods, and am booked on the next Open Blocking Day at Hat Works, where participants can use the museum’s collection of blocks. Can’t wait!
Posted by Black Tulip at 20:38 1 comment:

But it is, sometimes, economical with the truth.

Back in May, Lauren of Wearing History published a fascinating post on the Myth of Perfection; how we all present our best side to the online world, regardless of what is going on in our lives. She invited other bloggers to share their experiences, and many did. I didn't, because people who have been reading this blog for a while already know what the last couple of years have been like for me, and I didn't feel ready to put the whole thing out there again (the posts are here and here, if you want to know).

On a much lighter note, I was reminded of this when I was photographing my hat for the Historical Sew Monthly Heirlooms and Heritage challenge.

This was my inspiration.


I tried to recreate this look when photographing my own hat.


But how exactly was this look achieved? Time to let some daylight into the magic. . .

I don't have a proper hatstand, so the wooden pole is actually a holder for a roll of kitchen towel.


The hat is quite heavy, so when I rested it on the pole, the top of the crown distorted badly. I needed something small, solid, round and flat. A tea plate was just the right size, but obviously trying to rest a china plate on a wooden pole with a curved top is always going to end badly. Fortunately I remembered I had a sheet of rubber anti-slip mesh in the garage, and tried this. It worked (although the first batch of photographs I took all had the mesh peeking out from under the hat - sigh).


The backdrop is a hastily ironed piece of grey cotton, and the 'hatstand' was placed on a small pouffe, chosen because it was higher than working on the floor, but low enough for the backdrop to be draped behind it.


And the backdrop drape? That was achieved by using a clothes airer.


So there you have it, the Awful Truth. Anyone else have any 'How I did it' pictures that they'd like to share?
Posted by Black Tulip at 20:45 2 comments: