As well as making fabulous shoes, and creating Pinterest boards which cause you to lose hours drooling over the pretties (ask me how I know), Lauren of American Duchess somehow also finds time to write an excellent blog. I always enjoy reading it, but her most recent post made my little heart sing.

Joy of joys, Simplicity are going to start actually using their vintage patterns to create reissues, rather than redrafting them from scratch! Woot! Hopefully this will address some of the things which I complained about in this post.

The thing is, I absolutely love the end result of Simplicity 1777. It was just a shame that it took so much fiddling to turn it into my idea of a 1940s dress. So I'm unreasonably thrilled that Simplicity vintage patterns are going a bit more, well, vintage. This 1930s beauty is one of the first reissues under the new approach - coming out in the winter catalogue. It's now on my 'To make' list, so in due time I'll be reporting on how well it turns out.

Only a short meeting this month, as we didn't have a lot to discuss.

The altar top cloths and communion veils of all four sets are complete, as are the burses apart from adding silver thread to the cross on the cream set. This just leaves the pulpit and lectern falls in purple, cream and red, and the four stoles. Fiona and Kath will make up the falls, and I will do the stoles.

As last month, the main focus of attention was the kneelers. Ros and Rebecca "improved the shining hour" by working on them during the meeting!


Ros has also obtained the foam inners for the kneelers; one is visible at the front of the photograph above.

It turned out that none of us has ever made up a kneeler before, so we weren't entirely sure how to do it. Fortunately Rebecca found this website, which has full instructions. As making up will take longer than our usual two-hour lunchtime slot, we decided to have a Saturday afternoon session instead.

So the next meeting will be on Saturday 19 November at 2pm, in rooms CSH112 and CSH111. Kath will book the room, make sure that the porters are expecting us, and provide that all-important tool - a kettle!
Posted by Black Tulip at 22:08 No comments:

The Ottoman costume finally gets an outing!

As promised some weeks ago, a photograph from my recent day out with Ya Raqs at the Formby Viking Medieval Market. You can read all about the day here.


The costume has been packed away for some time, and I've never had the opportunity to wear it for a full day's event. The Absurdly Large Trousers (which somehow are barely visible here) need a fasten at the ankle cuffs to stop then from slipping over my feet, but apart from that the whole thing was very comfortable.

I'm thrilled by just how much my costume matches the source images I used for inspiration; the fastenings are too ornate really, but the overall shape is pretty good.

Thanks to Kebi for the photograph.
Posted by Black Tulip at 20:40 No comments:

From initial post to finished item in one week! It's a long time since I've managed that. There is an explanation for this burst of creativity. Yes I'd bought some silk with no idea when I might wear a silk dress, but then in a moment of, "Buy it, and it will come", (a worrying precedent, given my weakness for buying fabric!) a reason came along.

My friend Suzanne Iuppa, for whom I made a costume last year, was organizing Chester Writers' contribution to this year's Chester Literature Festival; a series of readings on the theme of 'Gothic'. I ended up reading two excepts from classic novels, and dress of blood-red silk seemed not just suitable for this event, but almost entirely necessary.


As this was the third time I'd made up the bodice, it was as time-consuming as ever, but not difficult. I did make a further small change however; reinforcing the back darts and then snipping them open at the widest point, to make the bodice back lie better.

I hadn't made the skirt for the mock-ups, but it was straightforward. There was of course one change. Whether it's a simple day dress or a fancy frock, I'm on a pocket-adding roll at present. (Although I must admit that the shape of this dress makes the pockets oddly far back, but never mind.) Usually the skirts of Vogue patterns are far too long on me, but this one was just right.

Like my version of Simplicity 1777, the skirts are laid over the bodice and top-stitched, proving that this construction method persisted until at least 1952. I finished the completed waist seams with bias binding, as the fabric frays a lot.


The silk is very heavy and stiff, more so than the quality of the weave would suggest, so I suspect it has been heavily treated to give it more body. This gives the dress quite a sculptural quality; as though there is a separate flared coat over a straight dress.Certainly it didn't need a net petticoat to hold it out.


One thing I did discover, as I made my way to the event, is that it's not an ideal dress for someone who walks everywhere. I had to clutch the fronts together, and even then I was grateful for the long slip I'd worn underneath. I think that I need to make this alteration before I wear it again.

Whenever that may be, at least I've had a reason to make the dress and wear it once. I love it, and it was perfect for the Gothic look which Suzanne wanted. Hopefully I'll have some more photographs to post soon.

23/10/16 - As the images from the event don't really show the dress, here's a standard back-yard shot instead. It's also a better representation of the colour. 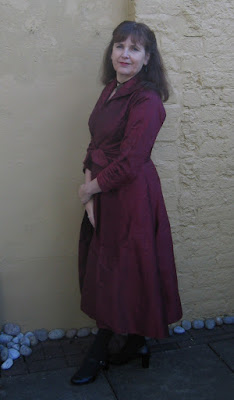 I’ve had this pattern on my ‘To make’ list for a long time. Then on my last trip to Goldhawk Road I found myself in Fabrix, which sells a silks in a mind-boggling array of weights and colours. Trying not to drool over the fabric, I decided that I really fancied pushing the boat out and making a silk dress (while wilfully ignoring the minor detail that I have absolutely no reason to ever wear a silk dress!).

After a lot of deliberation, I eventually decided on a deep red heavy dupion, and decided that this was finally time to break out Vogue 2401. It’s only taken me four months to get round to starting it, which is quite good going for me.


The pattern is defined as ‘average’ (or in French, rather wonderfully, as ‘less easy’). At first glance, it doesn’t look it. Like Vogue 2859, it has some oddly-shaped pieces.


I couldn’t work out how all of these would fit together, much less how to apply my usual Vogue alterations of shortening the bodice above and below the bustline. The easiest solution seemed to be to make a toile of the bodice with no alterations, work them out on the toile, and then transfer them back to the pattern.

I made the toile in woven gingham as this makes it easy to identify the grainline. As ever, I tailor tacked small circles, big circles and squares in different colours of thread; this turned out to be invaluable when making the bodice up.

Actually, the pattern isn’t that complicated, so long as you follow the instructions carefully. Like the famous Walkaway Dress, it has no zip or buttons. Instead the front panel fastens at the back with a grosgrain belt, and the backs wrap over it to tie at the front. As a result, making it up seems very odd until the final stages, when it all magically comes together.

On top of that, I changed the ties. The tie is made by folding the bodice side front piece so that the end is double, but this would be far too bulky in the heavy dupion. So instead I redrew the piece without the folded section.


After so many changes, I decided that a second toile was needed, to check everything before I started cutting out in silk. It was perfect, so now it’s time for the ‘real thing’!
Posted by Black Tulip at 18:12 No comments:

There's good news and bad news. The good news is that Simplicity 1777 is finished, I'm really pleased with it, and it's received lots of compliments (including, "That's a very pretty dress", from a male colleague, which is a first).

The bad news is that when I started to make a dress with ¾-length sleeves, with the intention of it being suitable for autumn wear, I hadn't really considered how thin the fabric is. I was less-than-toasty in it, even in a well-heated office, so it may not get much more wear this year.

Getting suitable buttons was surprisingly tricky. I found some red ones which were a perfect match, but they were so perfect that they almost blended into the fabric. Then on the button stall in the local market, which has come up trumps for me before, I found some buttons in the exact shade of blue. Unfortunately they were a bit small, and square, which didn't seem entirely right for the period.


The solution? Combine the two! Most buttons from the 1930s and 1940s seem to have been a single colour, but some multi-colour ones did exist.


Because the blue buttons have four holes and the red only two, I made a couple of fake stitches on the blue first, before sewing through both buttons. The end result looks like four-hole buttons, sewn on.


The sleeves and skirt were finished by my usual and totally non-period method of overlocking the raw edge, turning under a single layer, and hand sewing the hem.

And here's the finished dress. (Try to ignore the henna tattoo! This was to do with an event I attended with the Ya Raqs girls, at which I finally got to wear my Ottoman costume - hopefully I'll have some pictures to post soon.)

So that gets me up to three of my four pledged vintage makes for the year. I'm starting my studies next week, which will limit my sewing time, but I do have one final project in the pipeline . . .
Posted by Black Tulip at 20:38 2 comments: