A work in progress

A very, very short post today, just a couple of detail shots of the embroidery I'm currently working on.


All of the embroidery which has appeared on this blog over the years has been on clothing, but I do occasionally do purely decorative pieces, and this is one of them. Satin stitch has never been my strong suit, but hopefully most people won't be seeing the full piece this close-up.


A few of you may understand why I'm not in the mood to write a lot today. Initially it was birthdays and our wedding anniversary which were tough, and I found I could simply ignore 27 March. However, it's actually becoming a harder date as the years go by - I guess it's something to do with marking the passage of time. At least the day is nearly over, and normal service will be resumed next week. 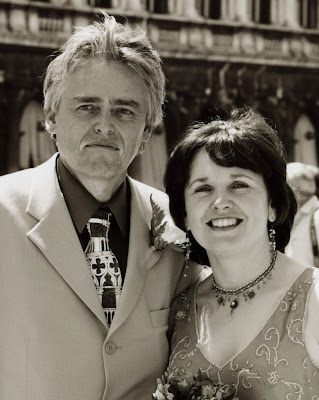 Just a short post this week, based on an article in the 5 September 1934 issue of Vogue.


The issues of the magazine which did not have a Pattern Book attached often seem to have carried a brief item on the latest patterns. In this case, the 'Vogue Pattern Wardrobe' piece covers a selection of evening, outdoor and daywear patterns suitable for women in their twenties, forties and sixties, along with suggested fabrics.

As ever, I am at a loss as to what makes the patterns suitable for each age range.


Also as ever, the older women are drawn as having light-coloured hair, but otherwise not remotely older.


The illustrations for all ages use the improbable proportions of fashion drawings of the era.


The coat for in the sixties selection is the only pattern for which I could find a pattern envelope illustration.


I only have a few pre-war issues of Vogue and the Pattern Book, so I can't tell how regular this sort of feature was. Nonetheless, it's interesting to see that well before the arrival of Mrs Exeter, the older woman was, at least occasionally, specifically referenced by Vogue patterns.
Posted by Black Tulip at 20:42 No comments:

This is a recent acquisition.


Although it describes itself as "A quarterly magazine dealing with fashions for the matron", it is not about dressmaking, and nor is it really a magazine. It is actually a 16-page sales brochure for a firm called William Barker, and the title is clearly aimed at positioning the business as a 'dressmaking establishment' rather than a mere shop.

William Barker, (formerly F. H. Barker, and no connection to Barkers department store in Kensington), was based in 215-221 Borough Road, London. The original buildings no longer exist, as the area was heavily bombed in the Blitz. However, according to british-history.ac.uk, a Mr Barker and a Mr Nelson established a mourning warehouse in number 215 in the latter half of the nineteenth century, so I assume that Barker's was a continuation of this.

There is no date on the magazine, but a clue is provided on page two where there is a photograph of Borough Tube station, with a reference to "the opening of this station".


The original Borough station opened in 1890, but it was rebuilt in 1922. It's not clear when in the year the remodelled station was opened, but an explanation in the foreword of the effect of "New Duties" on goods makes me think that the magazine dates from summer 1922 rather than 1923.

The foreword also states that Barkers has specialised in catering for the 'matronly figure' for 25 years. Clearly a lot of the business was mail order: there is a measuring chart on page two. The magazine was sold on railway station bookstalls, and the six old pence cost was refunded on any orders or personal visits. Goods over 20 shillings, which covers most of the items featured, were sent post-free.


Barker's origins as a mourning warehouse are clear; the logo on one (but not all) of the pages includes "black wear", and all of the clothes featured, apart from underwear, are available in black.


Many are also available in navy, grey and dark brown, and a couple of blouses/coatees are offered in the traditional half-mourning colours of mauve and purple. The fabrics are usually plain, or with a white design, and for the one item I found with an option for patterned fabric, the patterns could be "sent on application".


Many of the descriptions talk of garments having "the necessary long lines", and being cut to "our ample measures".


Some of these ample measures came at a price, however. The foreword mentions that larger sizes require more material (true) and "more careful skill" (questionable). For all the dresses in the magazine, the price shown is for models up to 36" waist. Larger sizes are available for a flat rate of an extra ten shillings and sixpence, which works out at 11% extra for the cheapest dress on offer, and 7% extra for the most expensive. A similar premium applies to skirts. Coatees, however, are all available up to a 52" bust at a single price.

Even with a corset (in stock up to 40" waist, larger sizes to order), the chances of any customer having a 36" waist and a 52" bust seem unlikely, especially given that all the women in the illustrations are essentially tubular. I assume this was simply a ruse to draw customers in with an eye-catching price, with the sting being in the small print.


Most of the garments shown are described simply as being 'for the matron'. Only one is "designed exclusively for the younger matron's figure".


Equally, this dress is described as "designed exclusively for the elderly lady" - I wonder if you had to prove your age before you were allowed to buy either of these models?


There are several other items for the older matron. As ever with these things, although they look slightly older than some of the other models in the magazine, none of the wearers are drawn as 'old'. There is not a wrinkle to be seen, and all chins are firmly defined and in the singular.

This dress is described as "suitable for the figure needing fulness [sic] and length". It is worn by the only model in the magazine wearing her hair in the more old-fashioned style of up in a comb.


The description of this slip makes no attempt to hide its purpose.


Millinery is the only area where mourning is specifically mentioned.


This hat is available in "mourning grenadine" (which I assume was non-shiny).


Although just described as "dainty bonnet", this is obviously a style for an older woman.


This particular Widow's Hat is one of the "large variety" which Barker's claims to always have in stock.


Other than the handful of clearly more dated styles for women who have chosen not to follow the latest fashions, I don't see a huge difference between Barker's clothes and the general fashions of 1922. I have a couple of issues of 'Le Petit Echo de la Mode' from that year, and here are some of the dresses featured.


Obviously, matrons would be unlike to wear robes de style like the one on the far left, but other than that, most of the differences that I can see are the shorter sleeves and wider necklines. Even the Armistice Day issue with younger women in mourning dress on the cover doesn't show noticeably different styles from those in the Matrons Dressmaker.


All this would seem to suggest that Barker's selling point was not necessarily 'old-fashioned' styles, but its larger sizes, cut to accommodate older figures, with details such as long sleeves, and a predominance of darker colours. With the exception of the darker colours part, I suspect that many women today who don't make their own clothes would welcome such a shop.
Posted by Black Tulip at 23:25 2 comments:

I can't believe that I've not yet mentioned this little detail that I discovered when I first took the pattern pieces out. Clearly the previous owner was a smoker, albeit a careless one! The burn hole goes through two layers, so hopefully she only dropped ash on the folded tissue, not on the fabric.


Meanwhile, back to the dress. I cheated a bit with the sleeves. The instructions are for the "new" method of gathering, rather than shrinking, the head of the completed sleeve to fit the armscye.


I went with the even newer and easier method of attaching the sleeves to the bodice before sewing the sleeve and side seams. Although the sleeve uses gathering to fit, it is not a 'gathered' sleeve, the head should lie smoothly.


For me, this would be a challenge with either a treadle or a flat-bed machine, and a recipe for disaster with both. There's much that I like about old patterns, methods and machines, but I'm not obsessive about period accuracy.

One thing I do like on old patterns is the elbow pleat detail on sleeves - it's not something you see on modern clothing or patterns. Possibly because slim, bracelet-length sleeves now only appear in stretch fabric, so there is no need for the extra ease.


The belt was made using my trusty furnishing-buckram-and-cotton method, and has a modern buckle. All of my suitable (by colour and size) vintage buckles had quite small holes, and the brushed cotton was going to make the belt too bulky to work with them. After all of last week's button auditions, I went for something different - dyed shell buttons which I spotted when buckle-shopping.

One thing which I just couldn't find was a suitably coloured thread for the buttonhole on the upper tab. So instead, I sewed the buttons onto the right front, and used press studs (snaps) for closure.

And here is the end result. It gaps a bit below the lowest button - when I reread the instructions, I discovered that I should have sewn the fronts together for about 2.5cm/1" above the waist. Given that, like 1940s dresses, it's already a bit of a challenge to get on and off, I think I’ll add a fourth press stud instead.


The skirt consists of three panels on the back and three on the front, with the seams aligned with the bodice darts. I really like the degree of flare; it's comfortable to sit down in, but not massively full.


Naturally, I gave in to the temptation to #poselikethepatternmodel!


As well as true vintage and vintage-inspired fabrics, Til the Sun Goes Down also sells their own designs, based on original prints, and produced in limited quantities. So when they announced a restock of some of these fabrics, I just had to snap a few metres up while I could. Honest, guv.

This floral cotton print on a sketchy background is pure 1950s, and I have no shortage of possible patterns for it.


This crepe, on the other hand, is a bit trickier. Most 1920s and early 1930s styles, which is the era of the print, do me absolutely no favours whatsoever. But I loved the design, so got some anyway. I'm sure I'll think of something.