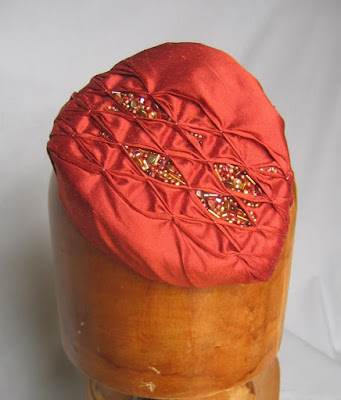 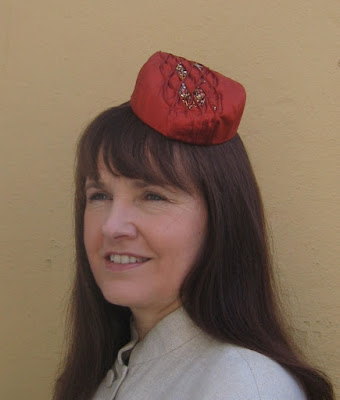 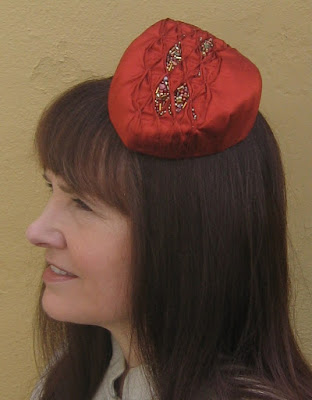 Anna Sui at the Fashion and Textile Museum

As well as Balenciaga, my recent London trip involved going to lots of other exhibitions; A Handful of Dust at the Whitechapel Gallery, Chris Ofili at the National Gallery (thanks to Sue Carter for telling me about that one) and, erm, one on plywood (I know, I know, please don’t judge me!). But the only other one I’m going to post about is The World of Anna Sui at the Fashion and Textile Museum.


“The World of” is an appropriate title, because what really came across was the designer’s overall vision; an aesthetic which carried across all of the work on display, regardless of which collection it came from. The main hall was set out in the style of an Anna Sui boutique; black lacquered furniture, Tiffany-style lamps, Art Nouveau swirls, and mannequins with papier maché heads. There was even a fake palm tree from a catwalk show!


The clothes were arranged into “Anna’s Archetypes”; characters or eras which represented the themes which have been present throughout her career.


Needless to say, I particularly like 'Retro', especially the hats!

I really liked this embroidered dress from the 'Mod' archetype, I was just sorry that so little of it was visible. My first embroidery project in primary school sewing was a design (and colours) very similar to this!


The upstairs display was more about accessories, and the design process.


A long display showed the mood boards which Sui creates for each group within a collection, alongside a completed outfit.

With the exception of one case, the exhibits in the Balenciaga exhibition were almost all plain, and let the cut and the drape make the impact. Here however it was far more about embellished details. As ever with the Fashion and Textile Museum, the lack of glass meant that you could really get a good look at (and good photographs of) the pieces on display.


I loved the clothes, but I must confess that I just couldn’t get on with the papier maché heads. Blame it on my north-west roots, but for me they were just too reminiscent of Frank Sidebottom, something which did not help the overall look at all! (I appreciate that this is a reference which will mean nothing to anyone outside a 50-mile radius of Timperley - or indeed, many people within a 50-mile radius of Timperley.)


This aside, I really enjoyed the exhibition. Before it, I knew nothing about Anna Sui apart from the name, so I wasn't sure what to expect. I'm very glad I went to find out.

Balenciaga at the V&A

I've been down to London for a few days, and part of the reason for the trip was to visit the Balenciaga exhibition at the V&A. Most fashion exhibitions at the V&A do not allow photography, and at the recent underwear exhibition even sketching was forbidden, but this time both were permitted. I took a lot of photographs - at one point I honestly thought that my camera was going to overheat and die - but for the sake of everyone's sanity I have edited it down to a sensible number.

The ground floor of the exhibition was all about Balenciaga's own work. It began by looking at the elements of his Spanish heritage which influenced his designs; regional dress, flamenco and bullfighting.


Unlike most designers, Balenciaga started with a fabric and let its properties dictate the design of the garment. 'Gazar' silk, which is lightweight but stiff, was created in 1958 and became a favourite fabric of his.


There was a whole display of black dresses, including the one which appears of the cover of the catalogue, but I failed to get a decent photograph of them.


Much easier to photograph were the three outfits which were displayed in detail. These consisted of the original garment(s) on a rotating mannequin, a toile, X-ray images showing details of the construction, and original sketches and photographs.


This dress was displayed inside-out to show the construction details. The edges are bound with silk tulle, and even the zip tape is covered with velvet to make it more comfortable to wear!


I can't imagine that this was comfortable to wear, though. The billowing skirt front was achieved by tying the hem around each leg above the knee; the ties are just visible on the toile.


Talking of toiles; I loved this one for a suit, with the pattern of the fabric drawn on.


Balenciaga was trained in both dressmaking and tailoring, and I imagine that both must have come into play when designing this coat. A piece of ribbon runs inside the sleeve, and holds the elegantly draped pleats in place.


This suit was displayed along with tailoring equipment.


Although Balenciaga was based in Paris, he also ran a Spanish couture house called Eisa (from his mother's maiden name). This produced selected items from the Paris collections, and canny international clients bought their Balenciaga designs there, at a fraction of the cost of the Paris equivalents!


The Paris premises included two millinery ateliers, and the exhibition included a display of Balenciaga hats. Sadly the lighting was too low for many of the photographs to come out well.


Balenciaga was strict about how his clothes should be worn; this pillbox hat for example was meant to be worn on the top of the head. Its owner, Gloria Guinness, clearly had other ideas.


The next case contained a number of amazingly embellished garments.


The white and pink evening coat was made up first, and then beaded. The organza base was dip-dyed, to add to the colour gradation.


This dress for the, ahem, remarkably-proportioned Viscountess Lambton was made differently. The eight panels which make up the dress were marked out on the fabric before the embroidery was done. This meant that no time was wasted embroidering fabric which wouldn't be used. If you look closely you can just see the horizontal bust darts in the centre two sections, but the embroidery is positioned so cleverly that they are almost invisible.


This dress of hand-painted silk was my favourite thing in the entire exhibition. I loved everything about it; the neckline, the bow, the positioning of the blue flowers on the bodice to be symmetrical but not rigidly so, the way that the yellow and pale blue flowers on the ends of the bow are matched on the respective sleeves. Sigh.


The upstairs section of the exhibition looked at Balenciaga's influence; both directly and as a design legacy.


Emanuel Ungaro was apprenticed to Balenciaga, and later set up on his own.


Hubert de Givenchy was mentored by Balenciaga, and when the latter closed his house in 1968, he referred most of his clients to his protégé.


Finally, a selection of pieces by designers with no direct link to Balenciaga showed how his ideas continue to influence fashion today.