It's my dance class Christmas party this week, and I'm performing a piece I choreographed some years ago as homework, but have never actually danced for the class. It's also an excuse to wear my Golden Era costume again, so I needed to make sure that it still fits. Then, when I was looking at a YouTube clip of Samia Gamal dancing with Farid el Atrache, I noticed that he was wearing a striped galabeya, and had An Idea. A very silly idea indeed, involving clothing from a completely different country, but one I just had to try out.

So here is. Exhibit A: a still from the film clip. Unfortunately I don't know what the film is called (anyone out there who can read Arabic?). And apologies for the poor picture quality.

Exhibit B: Mr Tulip and me, in a very vague approximation of the pose! 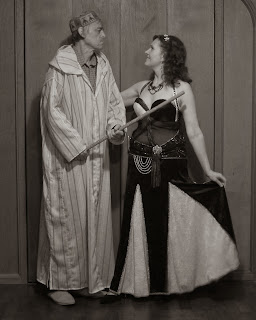