My 100th post! This seems to call for something more than an update on my current projects.

To me, one of the nicest things about having been sewing for a long time is that along the way I’ve acquired skills and tools which bring back happy memories whenever I use them. In an earlier post I mentioned my friend R teaching me how to do French knots left-handed; whenever I use them now, they always remind me of her. So, this post seemed like a good time to write about some of my sewing tools, and the memories they hold.

First up is this needlebook, which I made in primary school. It’s the earliest piece of my work which I still have. I had made things before this, but over time they were thrown away: this got kept because it was useful.


I don’t know if you can still get the fabric which the book is made from, but at the time it was a very popular tool for teaching children how to sew; the long white threads were an aid to cutting in a straight line, and could be used for a variety of embroidery stitches. The book consists of a rectangle of this blue fabric, embroidered with soft cotton thread, and lined with an unknown fabric (now sporting a couple of unknown and irremovable stains). The raw edges of both pieces were turned in, and the rectangles oversewn together, then a rectangle of felt was sewn in down the centre through all three fabrics. After all these natural fabrics, the book was finished off with corded ties made from then very fashionable nylon wool. Nice!


Nowadays I usually keep my needles in the turned wooden case beside the needlebook in the picture above. This works fine if it is kept in my workbox, but sometimes the lid can come off. So when I’m away, for example on a sewing course, the needlebook still gets used.


This mock crocodile skin case, complete with two lockable claps on the top, holds a hefty 25 pounds of sewing goodness; my mum’s first sewing machine, Singer model 99. I love the way the wooden case is designed to hold the machine in place. The clip on the right was for the can of oil, and the extension table slots into the lid.


The machine dates from the 1950s, and was originally hand cranked. However page two of the instruction booklet is an advertisement for converting your machine to use electricity, and this Mum duly did, with my dad fitting the motor and light.

The instructions for installing and using the motor even include an illustration of how to store the foot control with the machine; just in case you couldn’t work this out for yourself!


I can’t remember how old I was when Mum first taught me to use the machine, but I do remember sitting at the kitchen table with it, and feeling very nervous! In time Mum bought a new Husqvana machine, and the Singer was relegated to a cupboard. Eventually I acquired it, and even though I now have two more modern machines, I still find the Singer best for jobs involving heavy upholstery fabrics or machine quilting. I don’t know if this is true, but someone recently told me that only older machines like this produce a true straight line of stitches; modern machines which sew both straight and zig-zag will always have a slight wave in the stitching.

If only there was some way of attaching a smell to a blog post! I haven’t used the Singer for a while, and as soon as I opened the case to take these photographs, a familiar aroma flooded out. Although I’d been thinking about what I’d made with the machine in the past, I had completely forgotten about its distinctive smell; presumably a mixture of oil, wood and nameless fluff. Just sniffing it took me straight back to the house where I grew up, and watching Mum make dresses for me!


In the early 1980s I left home and went to study at the University of Liverpool. Unsurprisingly, not that many of my fellow students had any interest in sewing (although I did teach a couple of friends who developed an interest as they saw the various things I made). So, I joined the Merseyside branch of the Embroiderers’ Guild. There I met a lot of lovely, like-minded people and made some good friends. One of these was Mrs W, whose husband had worked as an engineer for what was then Liverpool Corporation. Among other things he had been involved in building a machine to clean the road Mersey Tunnels. Mrs W had a fabulous little beeswax holder which her husband had made for her, and he very kindly made one for me as well.


Its shape is similar to that of the machine bobbin next to it, and it consists of two old, one shilling coins joined together with a central spindle. You simply take a small piece of beeswax, soften it between your fingers, and press it against the spindle. Keep doing this until the holder is filled, and to replenish it as the wax is used. To wax your thread, grip the holder by its flat sides, and draw the thread through the wax. I find it is far less wasteful that the cakes and blocks of beeswax which you can buy, as nothing breaks off it.

The beeswax holder came in very handy when I, along with other members of the branch, got involved in a project to restore some of the ecclesiastic embroideries in Liverpool’s Anglican Cathedral. Getting to see and work on these beautiful pieces from the early twentieth century was a joy and a privilege. Almost 30 years later, something as simple as waxing a thread brings back a lot of happy memories from that time.

My workbox belonged to my late mother-in-law, who loved owls. When she died, my sister-in-law offered it to me, and using it pretty much every day is a lovely reminder of a lovely lady. 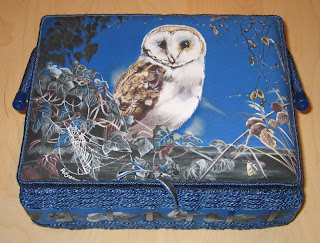 My final sewing tool is actually 50 tools; my sewing weights. These have cropped up in pictures in various posts before now, but never with any explanation. Used instead of pins when cutting out pattern pieces, they really speed up one of the more boring parts of dressmaking. I also find them very handy for holding sheets of tissue paper in place when drafting new pattern pieces from existing patterns.


You can buy pattern weights, but they can be quite expensive, especially if you need a lot. Mine are simply a pair of large washers from a hardware store (B&Q in my case), inside a small fabric pocket lined with wadding. Something I read online recommended using silk, as this was less likely to damage any delicate fabric they were laid on. Fortunately I had a small remnant of brightly checked silk (I can’t imagine where it came from!) , so that’s what I used.


So, the memories. Whenever I go away, I always take some sewing to do. In 2010 I went on a trip to Morocco with a number of the Ya Raqs girls. We stayed in a riad in Marrakech, and although our days were busy with sightseeing, shopping and of course dancing, we also spent time just relaxing on the roof terrace, enjoying the sun.


I get twitchy if I sit and do nothing for too long, so this was perfect sewing time. Obviously I didn’t take the weights, but many of the silk pockets were sewn either on the flights there and back, or sitting on the roof terrace. So now, it can be cold, dark and generally dismal outside (like today), but simply cutting out a dress can take me back to enjoying afternoon tea at the Hotel Mamounia, or just sitting in the sun with the girls.