Scary monsters, and yet more painting

A couple of weeks ago, I blithely mentioned in a post that I had finished all the fabric painting for the beaded dress. However I spoke too soon.

In “Patterns of Fashion”, Janet Arnold mentions that the original dress has a small label inside to distinguish the front from the back. Having made my orange dance dress from the same pattern, I can confirm that it is very hard to tell the difference. So I decided to simply things by adding an extra motif on the front of the dress at the neckline

I based this on part of the centre motif on the hip band, but turned round by a quarter.


While I was painting it, I knew that it reminded me of something, but I couldn’t quite think what. Then it struck me; this ... 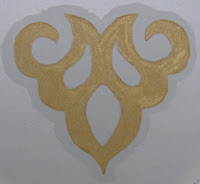 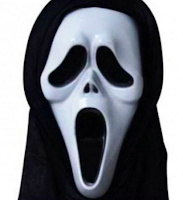 I asked Mr Tulip for a second opinion; and he confirmed that once you’ve seen it, it’s very hard to un-see it. So, I needed a new design.

I didn’t want to introduce yet another motif, so used the design from the side of hip band instead. This shows what the side seam should look like when completed.


I tilted the side pieces up to make the motif slightly narrower, and to form a triangular shape.


There was a bit more painting to do. When I painted the hip band I had heavily outlined the design, and when washing the outliner out, this also removed some of the gold paint and the colour underneath. So, these areas needed a repaint. This was tricky as there was no longer any outliner to protect the design, so I had to use a fine brush with tiny amounts of paint. For the new motif I simplified things by painting the colour, then washing out outliner, and only then adding the gold.

In between all this painting, I have completed the beading on another two motifs, and I'm happy to report that they are wiggle-free. Progress!
Posted by Black Tulip at 19:44