I was happy with the toile, but I wanted to make one final check before I took scissors to fabric. The pattern calls for shoulder pads, so I needed to try the toile out with those in place. I could have used modern pads, but the pattern includes instructions for making them, 1948-style, so I decided to have a go.

Each pad is made out of four pieces of cotton batting, stacked together and covered with an oval of lining fabric.


The pieces of batting are stitched together; I used a herringbone stitch. Then the seam allowance of the lining is turned under, holding the batting in place. The pattern suggests turning the lining under all the way round, but I only did the section around the batting. 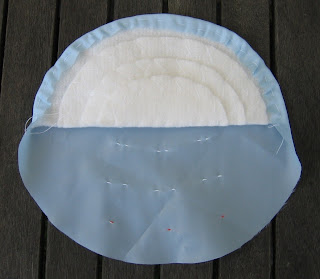 Then the lining is folded in half and pinned over the batting. 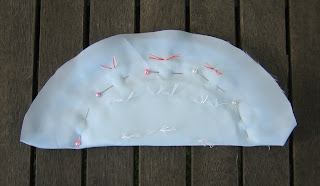 This was the point where I turned the remaining raw edge in. The edges are pinned together, then overcast with small stitches. 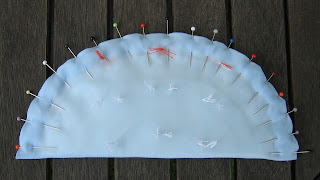 Finally the darts are pinned to make the shoulder pad curve. 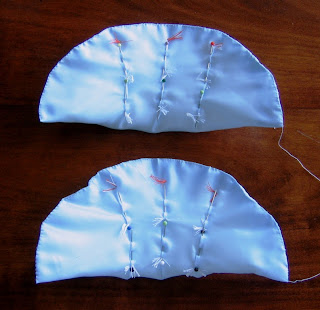 And slip-stitched along the pinned pleats.


The most complicated part of the dress is the front, and it is quite complicated. There are a lot of different markings on the pattern; small circles, large circles, squares and triangles, and you do need all of them. If you are using tailor tacks as I do, I really recommend using a different colour of tacking thread for each symbol, otherwise you have to keep referring back to the tissue pattern pieces to tell which marking is which (ask me how I know). If you can’t get coloured tacking thread, the soft thread used for overlockers (sergers) will do.

Making up the dress starts with the right front. Part of the centre curve is stay stitched, and then the seam allowance is pressed under. The bust dart is a bit tricky because the two sides are different lengths. The lower edge should be stretched to fit the upper edge, but I found it helpful to go along the upper edge with long machine stitches just inside the sewing line: this had the effect of gathering the upper edge ever so slightly.


The skirt is then attached to the right front, and a gathering stitch run from the end of the turned-under section to a notch on the skirt top.


Next the left front is made up, also with a dart, a section turned under, and gathering.


The gathers are then drawn up until the two pieces fit together. Gathering the skirt and right bodice to fit the left bodice is a very long job. In retrospect it would have been easier to do two separate sections of gathering, one either side of the right bodice/skirt seam.

It took a lot of pins to hold the two sections together. Here I need to confess to an Awful Sewing Secret: I almost never tack (baste) things when I’m sewing. Normally I go straight from pinning to machining. However I made an exception for this. The two pieces are joined not with a normal seam, but by topstitching as close to the folded edges as possible. It would be impossible to get a smooth line of stitching if I had to stop each time I reached a pin, so tacking it was. In fact because the fabric was so tightly gathered I did a second row of tacking, to stop the gathered fabric from dragging and getting distorted as I sewed.


Once the front was complete, the rest of the dress was fairly straightforward. The backs are sewn together and the darts put in, the shoulder and side seams done, the zip put in, the facing added (slightly tricky) and the skirt and sleeves hemmed. Because I’m left-handed, I swapped the zip to the right side of the dress to make it easier to use. I also added an in-seam pocket on the left side. I may take the pocket out however, as it doesn’t lie entirely smoothly.

So the dress is done, and it was an interesting and absorbing challenge to make it. There’s just one problem…

Well, two actually. The first one is the buttons at the back neck opening. I decided to make covered buttons, with the fabric cut out so that each button had a red flower in the centre. Unfortunately my local fabric shop doesn’t stock the brand of self-cover buttons I usually use, but I assumed that one type would be much the same as another. Ha!

I carefully cut out six circles of fabric, two each of three motifs, to the 11mm button dimensions given on the template provided. Then I gathered one up, and discovered that it was nowhere near big enough to cover the button form. Thanks, Hemline.


So, I carefully cut out six circles of fabric, two each of three motifs, to the 15mm button dimensions given on the template provided, and these were just the right size. However when I came to attach the buttons to the dress, a whole new problem appeared.

The brand I usually use (Prym, since you ask) make up into quite flat buttons, with a small shank.


The Hemline buttons have a much longer shank, and stick out from the dress like brightly coloured mushrooms with long stalks. Or they stick out at a strange, off-kilter angle.


So, I need to track down some a supplier of Prym buttons, and cut out a further six circles of fabric, and make six more buttons.

This is annoying, but can be fixed. Unfortunately the other problem is a bit more awkward. I just don’t like the finished dress. At all.

When I was researching last week’s post on re-use and recyling I came across a post on the Wearing History blog about feed sack dresses, something I’d never heard of before. Trying this dress on, even though I did take it in a bit at the waist, I immediately thought ‘feed sack dress’. Just without the ‘dress’ bit. Or the ‘feed’ bit, either.


There is a solution, of sorts. I know from long experience that when I’ve been working on something for some time, all I can see in the finished article is the flaws. As I’m typing this, I can hear the wind outside, and there’s rain on the window. According to the BBC News weather website, “A spell of gale force westerly winds is expected to continue during rest of Sunday and through Monday across much of the north west of the UK”. It is the autumn equinox in less than a week. In short, I won’t have a need for a short sleeved/sleeveless cotton dress for some time. So I intend to fix the buttons, and then put it in the back of the wardrobe, and hope that by the time spring comes round it will look slightly less sack-like.

Oh well, onward and upward!
Posted by Black Tulip at 18:58