Bother! Having completed the toile, I was looking forward to starting work on Vogue 2787 this weekend, once we got back from a short holiday. Unfortunately while on said holiday I was bitten on the leg by something nasty (I’ve no idea what), which led to inflammation, blistering, a trip to the Minor Injuries Unit of the local hospital, antibiotics, a trip to my own doctor when I got home, more blistering, and stronger antibiotics!

Six days after the bite it’s not a lot better, and I have got to keep my leg elevated as much as possible, which makes cutting out a dress a complete non-starter.

So, what to do instead? The latest Historical Sew Fortnightly challenge is Re-make, Re-use, Re-fashion. I haven’t made anything for this challenge, and normally when that is the case I post a short piece on the day that the challenge is due, with links to the things which other challengers have made.

However my enforced rest has got me thinking about the whole idea of this particular challenge. This gave me an excuse to look through some of my books and magazines for examples, so the time wasn’t entirely wasted!

The Dreamstress explains that
"There are numerous examples of gowns made from 18th century fabric that were re-made a number of times in the 18th century, and then re-made again in the mid-19th century, a hundred years after the fabric was first woven"
but the earliest example of re-use which I have seen recently is much earlier than that.

Among the various stunning pieces I saw in the Staffordshire Hoard is a pair of sword pyramids which included pieces of re-used Roman glass in their tips.

Despite this, I still tend to associate remaking and re-use with clothing. The earliest example my browsing turned up is a jacket from the Snowshill Manor collection, found in Patterns of Fashion 1.


Janet Arnold’s notes describe how the fabric dates from c. 1711-15, the cut appears c. 1730-50, and the white gauze trimming was added later, probably c. 1770-80, to renovate the jacket. The sleeves have also been lengthened from elbow and made narrower from the top, possibly as part of the same renovations.


A common candidate for remaking of a dress seems to have been the wedding dress. The idea of a wedding dress being worn for one day only is a recent phenomenon. Before that, a wedding dress was frequently worn as a best dress for some time afterwards, and as such was often remodelled to reflect current fashions and so extend its life.

One such example is this lovely 1899 wedding dress. Made by the bride, who was a lady’s maid before her marriage and clearly a skilled needlewoman, she later narrowed the skirt to create a more fashionable line, and added the silk braid to the front, possibly so that it could be worn separately with a blouse.


The dress features in the book The Wedding Dress which I have had on my bookshelf for a while and have now finally read, thanks to my imposed inactivity.

Over the years I’ve managed to collect a few issues of Le Petit Echo de la Mode, and my 17 September 1922 copy, the Special Fashion Number for the year, contains an article titled “How to Follow Fashion - How to transform our old outfits ourselves”.


“Always anxious to render service to our loyal readers” Le Petit Echo shows before and after drawings of a coat and a dress, plus instructions, and diagrams showing how the new pieces are cut from the unpicked old garment.


The coat requires extra “Tissue Écossais” (Scottish fabric, i.e. tartan), but the dress can be made entirely from the old garment.


Unfortunately my French isn’t good enough to decipher all the instructions, but it seems that readers could send off for either a plan and explanation for 1 franc 50, or a full pattern on strong paper, available in three sizes, for 9 francs for the dress and 7 francs for the coat.

Here in Britain, the concept of re-make, re-use, re-fashion is most likely to bring to mind the Second World War, and the idea of “Make Do and Mend”. Clothing was rationed from June 1941, with an initial ration for adults of 66 coupons per year. The next year this dropped to 60 coupons, which had to last for 13 months instead of 12. Eventually the ration dropped to 48 coupons per year.

The Board of Trade launched the Make Do and Mend campaign, and in 1943 the Ministry of Information published a leaflet of handy hints to enable people to get as much use as possible out or their clothes. This has been reissued as a small book by the Imperial War Museum. 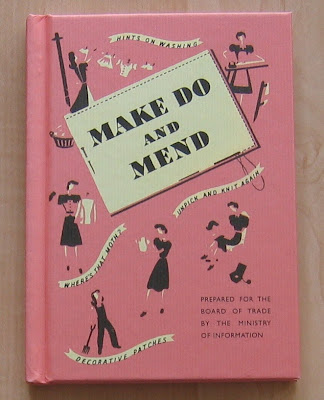 The leaflet contains sections on taking care of clothes (including dealing with the “moth menace”), laundering, mending and re-using wool, but it is the “Turn Out and Renovate” section which I found most entertaining. There are all manner of suggestions, with illustrations, for renovating blouses, coats and dresses.

I particularly like the suggestion for renovating a dark woollen dress which is worn in front and/or too tight by inserting a panel of contrasting fabric down the front which will apparently, “give the effect of a Redingote worn over a dress”. I'm not sure how many readers in 1943 would have had the faintest idea what a Redingote was.


I couldn’t help but wonder how many people actually did make a new dress out of two old ones, so like a good historian I turned to a primary source, and asked my mum. She confirmed that this was common and indeed necessary, as coupons did not stretch very far. For example, a lined coat required 14 coupons, a non-wool dress seven, and a pair of shoes five. Mum had made blouses from old 1920s dresses belonging to her mum (with permission, of course!), including one from a particularly nice heavy satin. She also remodelled an outgrown coat and a pleated skirt to make a new outfit. This involved unpicking the skirt and pressing out the pleats, then cutting a new slimmer and more fashionable skirt from the fabric. The coat was cut down to form a jacket, and strips of the remaining skirt fabric added to lengthen the sleeves and widen the front.

Although clothes rationing reduced after the end of the war, and finally ended in March 1949, the idea of remodelling clothes did not go away. This 1952 book is another of my charity shop finds, and although mostly about drafting patterns and modelling clothes on a dress stand (with some entertaining advice on styles for different types of figure) it does include a chapter on renovations and remodelling. 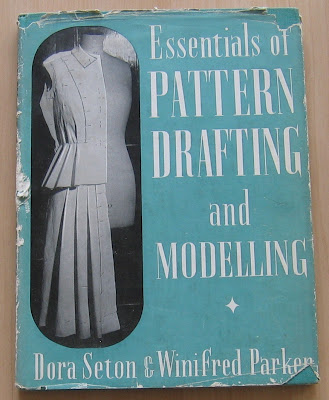 Renovation is defined as restoring or refreshing worn and faded parts of a garment, whereas remodelling involves taking a garment to pieces, washing all the parts, and remaking in a different style. The authors stress that
“To remodel a garment will take more time, and be a greater strain on the zeal of the worker, than the making of a garment from new material. But the joy of possessing a new garment for the sake of effort and patience is its own reward.”

Just for good measure they later add
“The result of skilful remodelling gives one a very real sense of triumph and achievement.”

To me, these sentiments sound as though they are desperately trying to convince the reader, rather than a statement of fact. Perhaps with the war years over and a new era of prosperity dawning, the ideas of re-make, re-use and re-fashion had finally gone. For the time being, at least.
Posted by Black Tulip at 18:36