Today I should be posting about my piece for the latest Historical Sew Fortnightly challenge; Wood, Metal, Bone. Unfortunately however I'm a long way behind on it. I have been busy sewing, but the results aren't very thrilling.

Mr Tulip is not well at present, and hasn't been for a while. He has problems with his hands and arms, which are making any dextrous movements very tricky. We are partway though all sorts of tests and visits to specialists, but while these go on I'm busy with practical things for him.

One of the things he struggles with is doing up shirt buttons, so I'm replacing them with press studs (snaps/poppers). Here's how.

Remove the button, and put it to one side. Sew one half of the press stud in its place. I use the side with the stud on it, because the back is flatter. 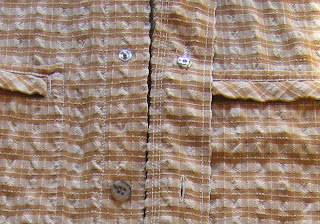 Finally, sew the button onto the right side of the shirt, over the buttonhole. When the shirt is done up, it just looks as though it is buttoned as normal. 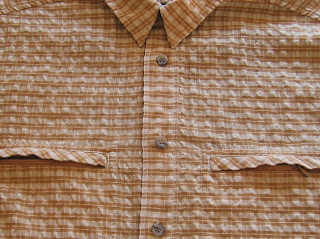 Most of Mr Tulip's shirts have zip pockets, which are awkward to open and close. So I've added loops to each zip pull. These are just a loop of four strands of sewing thread, covered in buttonhole stitch. Not very exciting, but they do the job. 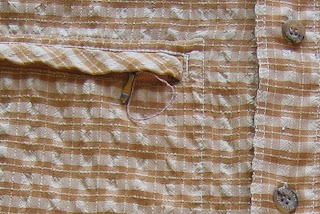 So that's been my week. Mr Tulip has a fair number of shirts for me to get through. In an odd sort of way it's quite satisfying though. There's nothing I can do on the medical side, or to speed up the process of tests and analysis, but it is good to have a skill which I can use to make life easier for him.
Posted by Black Tulip at 19:55