Now that I've finished outlining the flowers on the skirt panels, I've got to make a decision about the rest of the beading. The panels themselves are to be outlined with a row of beads. This is partly to finish them off visually, partly to add a bit more weight so that they hang well, and partly to provide cover for the hem around each panel.

Originally I was going to outline the panels with the same seed beads as I used for the flower 'stalks'. These are a darker gold colour and slightly larger than the beads I used to outline the flowers; size ten rather than size eleven. However now I'm a bit worried that they might overwhelm the beading on the flowers.

So, I laid a string of each set of beads around the motifs, following the line marked for the beading, and took some photographs. Do I prefer this, or this? 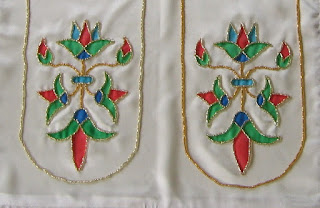 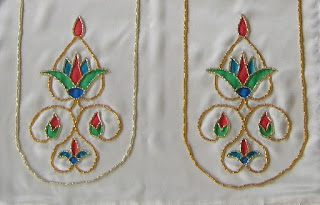 And this, or this? 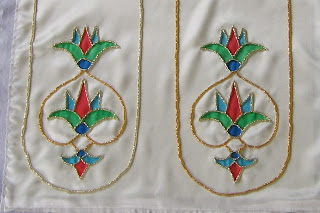 It doesn't show too well in the photographs, but I'm wondering if the mid gold makes the whole thing look a bit too brassy. There again, possibly the light gold looks a bit too feeble.

To add a further level of decision-making/angsty-confusion, there are also the hip and neckline panels to be outlined. Laying a string of beads neatly onto these for effect was impossible, so I just arranged them loosely around the outline.


The mid gold seems to overwhelm the painted design a bit.


In an attempt to add some context to the decision, I tried to lay the hip and neckline pieces over the actual dress.


I'm not sure that this helped much, as the heavy horizontal lines just called to mind this 1925 Paquin dress in the Victorian and Albert museum.


So many permutations to consider! Still, there is no need to make a decision just yet. I've got a busy few weeks coming up, and I'll be away from home for some of that time. I won't be able to do much sewing, certainly not beading at my big embroidery frame. However I do have a couple of failed attempts at the original, smaller neckline motif going spare, and these fit into a small (and very portable) embroidery hoop. So I may do what I often do in this situation, and work a sample.