How to bead a lotus flower

This fortnight’s Historical Sew Fortnightly challenge is Flora and Fauna, and as I have almost finished outlining the lotus flowers on the skirt panels with couched beading, it seems a good time to post about how I did it.

The beading is done with size 11 seed beads. For the fringing I strung the beads onto proper beading thread, but these beads are going to be couched down, and the thread is not required to take much weight or movement, so I used ordinary sewing thread in a gold colour similar to the beads. The couching thread is ivory, the same as the fabric.

The two panels I am currently working on are on a single piece of fabric. This was put into a roller frame and stretched taut. I didn't lace the sides because the fabric has a crossways stretch, and I didn't want to distort it. 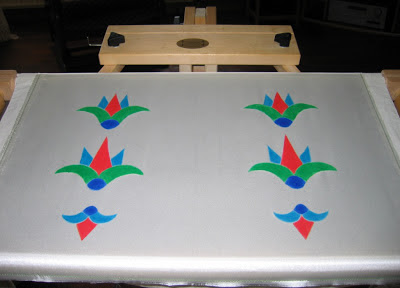 The most fiddly part of the beading is starting and ending, so it is best to do as little of this as possible. I worked out that with a little doubling back it was possible to outline a motif with a single pre-strung length of beads. The diagram below shows the order of working the couching; apologies for the wobbly lines! 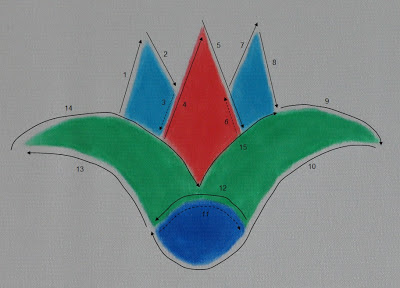 The length of the beaded thread needs to be at least as long as the total lengths of 1-15 in the diagram, plus a long tail at each end. The ivory thread is the same length as the gold thread.

Begin by taking one end of the gold thread through to the wrong side of the fabric, at the start of length one. Start a little way away from the green area, to leave room for the row of beads which will outline it. Knot the gold and ivory threads together with a long tail, and pull this back through to the right side of the fabric, away from the sewing line. As I’m working on satin, I pulled it though somewhere which would be covered by later beading, so that there were no marks on the fabric. 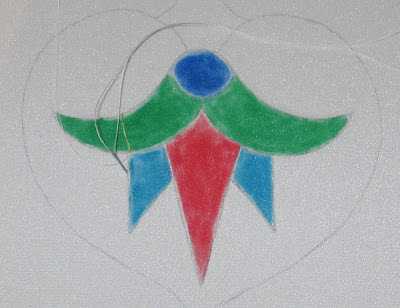 Pull the gold thread taut, and slide enough beads down it to fill the space up to the ivory thread. Make a tiny stitch across the gold thread and back down to the wrong side. 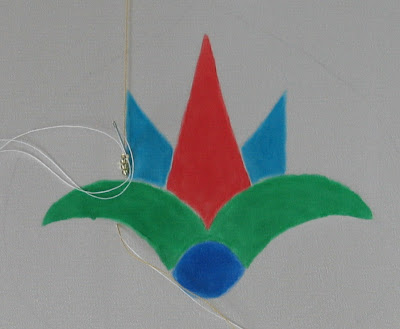 Continue to do this up the side of the first petal. I found that it was best not to pull the ivory thread tight, as this caused gaps in the beading. Because the beading is in a straight line, the couching stitches can be quite widely spaced, every four or five beads. 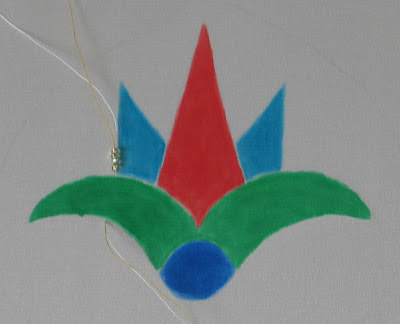 To bead round the point of the petal, stitch the beads down just before the point. 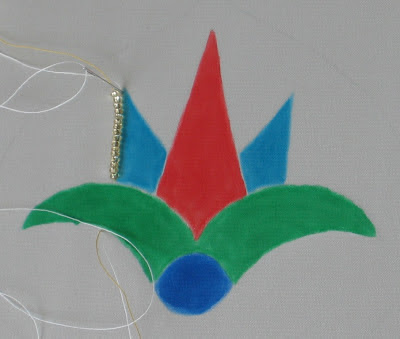 Then couch down a short length of thread only, without beads, to the point of the petal. 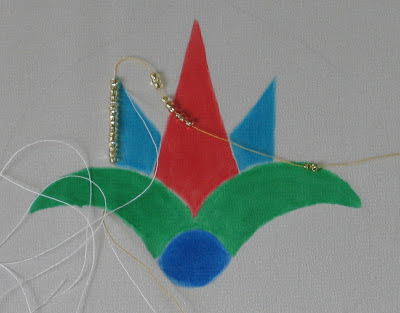 Then continue to couch beads down the other side of the petal. Push the beads up to the start of this line of beading, to form the point. 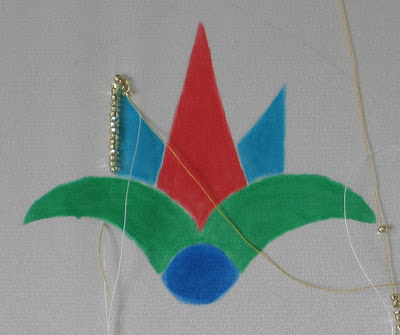 The aim is to have the beading running in as smooth lines as possible. Therefore the red petal should have an uninterrupted row of beads along each side. To do this, couch down thread only from the end of the turquoise petal to the base of the red one. This is line three on the beading diagram, and is marked with a dashed line. Because this is a straight line, it only needs a couple of stitches to couch down the thread. Again, do not couch right down to the green leaves, leave a little room for beading line fourteen. 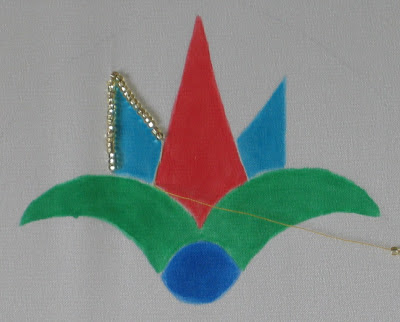 It is best to check the wrong side of the work occasionally, to make sure that the ivory thread has not got knotted up. This is also a good time to sew in the long tail at the start of the beading. Do this with a couple of tiny stitches in the direction of the beading; they will be covered on the right side by the beads. 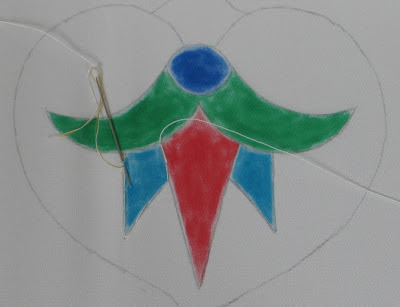 Make the point as before, and continue down the red petal to the base. 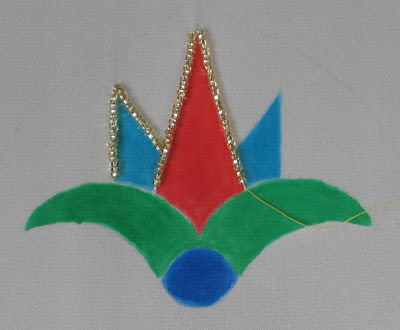 This time, the thread-only couching is done from the base of the red petal up to the start of the turquoise one. Slant the needle in to sew the thread as far under the beads as possible. 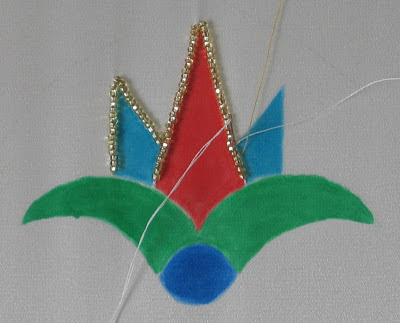 Couch around the turquoise petal, and then start around the green leaves.

Depending on the quality of the beads (and how careful you were when you strung them) you may find the occasional misshapen bead in the string. 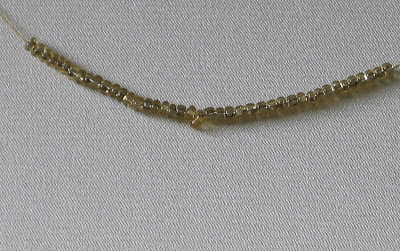 I preferred to remove them, as I found it impossible to hide the extra bump. There are two ways of doing this. Ideally, unstring the remaining beads, remove the offender and restring the others. The alternative method is to slide the other beads away from the misshapen one, and crush it with something.I used a small pair of pliers.

WARNING! Be very, very careful if you do this. Ideally, wear a pair of safety goggles. At the very least, wrap a towel or cloth around the bead to contain the fragments. When the bead breaks, bits of it will go everywhere, and you don't want a shard of glass in your eye. 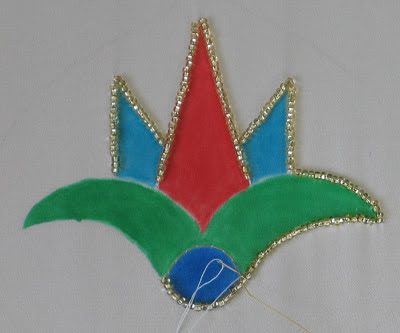 Continue beading around the outline of the flower, to the end of line ten. Then couch the thread around the base (line eleven). Because this line is curved, the distance between the couching stitches is much smaller than for the straight lines. Then couch the beads over the thread line. Because of the tightness of the curve, the couching stitches are every two beads. On the even tighter curve of the base of the small motif below, the beads are couched singly. 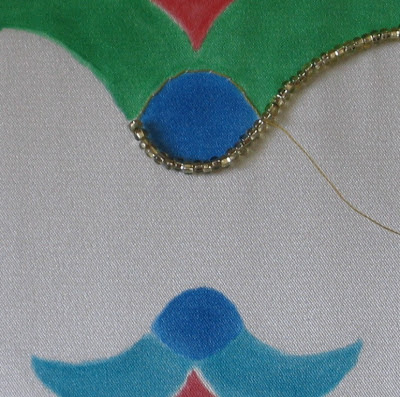 Once the couching around the blue base is complete, take a small stitch to secure the gold thread right at the end of line ten. The idea is for the beading to look continuous around the outline. Then continue around the green leaves, with the last ivory couching stitch being just before the end of line fifteen. 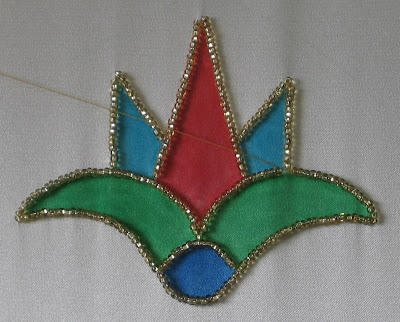 Pull enough beds close to the end of the couching to fill the gap (in this case, two). Then cut the gold thread, leaving a long tail. Thread this through a beading needle, and then pass the needle through the first couple of beads of line nine. 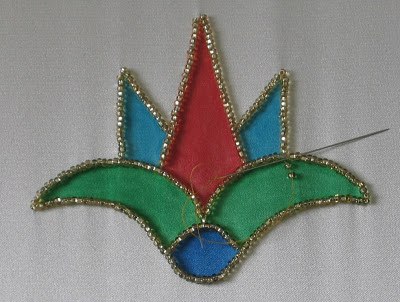 When pulled taut, this should not show any join. 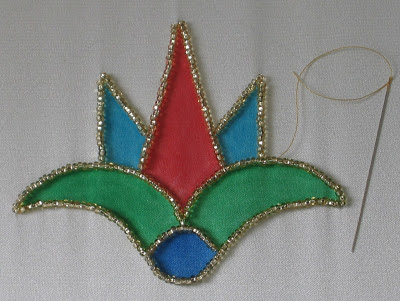 Pull the gold thread through to the back of the fabric, and secure it and the ivory thread with a couple of tiny stitches. 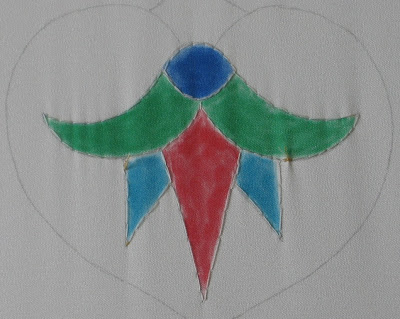 You now have a completed lotus flower. 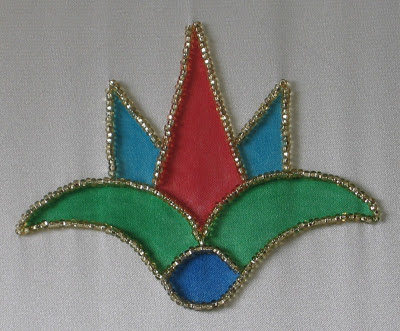