Finally I can write about what I've been up to these last few weeks! Warning: this is a long post, as there's a lot to explain.

14 December was the centenery of the first general election in which (some) women were allowed to vote. In Chester this was marked yesterday with a day-long event exploring different aspects of the suffragettes and female political participation in Chester, called 'Chester: Suffragette City'. 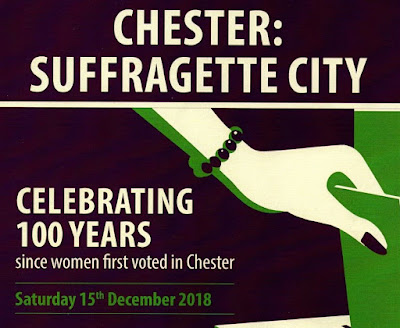 The day was organised by Professor Emma Rees, a woman who manages to do far more with her time than seems reasonable. Among other things Emma is director of the Institute of Gender Studies at the University of Chester, and runs the MRes course on which I'm a student. One of the things Emma wanted to do for the event was make a banner, so she looked round for a helper to run the project - someone with an interest in women's history who could also sew. Which is how I got involved!

Banners played an important role in the suffragette's campaign for the vote. It was realized early on that they added a strong visual element to marches and rallies, which helped to get press coverage. This poster for a procession in 1911, in the suffragette colours of green, purple and white, emphasizes the banners as a selling point for the event. 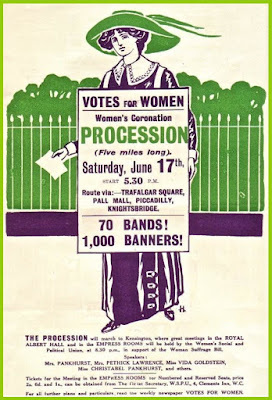 Banners were made for groups of workers and for specific places: to show that the demand for women's suffrage was widespread and not just limited, as detractors claimed, to a few women.

Some banners also celebrated women of note, to make the point that for all these women had achieved, they were still denied the right to vote.


Banner-making workshops were held, and Mary Lowndes, an artist who was also a suffragist, wrote a pamphlet entitled Banners and Banner-Making to help would-be banner-makers.


Based on this research, Emma and I decided that our banner should represent notable women of Chester throughout its long history, and should be in suffragette colours. In the spirit of the original banner-makers, it also needed to be a design which could be worked upon by multiple people.

I cannot draw at all, but fortunately Emma knows a man who can. Graham Boyd is a designer and muralist, and he came up with a design which fitted our requirements perfectly. Emma put out a call for people who could sew and who wanted to be involved in the project, and we were off!

For making the banner I borrowed heavily from the instructions provided for the Processions project earlier this year. Graham provided a cartoon (a full-sized drawing of the design), and I used this to trace each section of the banner onto a separate piece of white cotton.


All of the drawing with a frixion pen, which uses an ink which becomes invisible when ironed (thank you to Leimomi Oakes, The Dreamstress, who first introduced me to this fabulous tool). Because the individual sections of the design were going to be held in place with bondaweb before being sewn down, it was very likely that the ironing would remove lines which would be needed later in the construction process. To get round this, I went over all lines which I thought might be affected with tacking stitches in different colours.

Using bondaweb means that the design elements have to be cut out back-to-front, prior to being ironed in place. This was relatively easy with the lettering, because I could copy it into a document and then flip it before printing it out. For other pieces it was more complicated, but I only got one (fortunately small) piece wrong.

The design was split into six sections, one of which was lettering only. Four of the other sections I made up into 'kits': containing the backing fabric, the coloured pieces, instructions, and a repair kit of spare bondaweb and fabric in case any gaps appeared when the pieces were put together. Fortunately none of the repair kits were needed. The sections were given out to the banner-makers, to be worked on at home. Although I had every faith in my co-workers, I must admit that I was still very relieved when I got the sections back, and everything matched at the joins!

This seems a good point to talk about the figures in the banner. Minerva represents the city's Roman period. She is the Roman goddess of wisdom and warfare, and as a result is frequently portrayed with an owl for the former, and a helmet, shield and spear for the latter. Chester has a shrine to Minerva, the only one of its kind in western Europe still in situ. The medieval period is represented by St Werburgh, an Anglo-Saxon princess who became a nun. She is the patron saint of Chester, and the cathedral is named after her. She is alleged to have brought a dead goose back to life, after it had been eaten!

The central figure of the group, worked separately so that she could be applied over the join between two sections, is Susannah Brown. Along with her sister, in 1780 Susannah Towsey founded what would eventually become Browns department store in Chester. This was a millinery and haberdashery business, and Graham depicted her holding a ribbon to reflect this. She appears to have been an astute businesswoman; even after her marriage the business was very much in her hands. Initially she would travel down to London herself to buy stock, but as the business grew she sent an assistant instead: records exist of her providing detailed instructions of which shops the assistant should visit, and what to buy. As no images of Susannah could be found, I went through my books on eighteenth century costume (an arduous task, but someone had to do it!) to provide Graham with some images from the period.

Black net was used to provide shading in areas which needed it, although there were a couple of times when I did regret my bright idea to add tiny sections of black net to accentuate Susannah's ringlets! Where a line was needed to separate two areas of the same colour, for example between Susannah's neck and her fichu, this was done by applying a length of narrow black ribbon. Small details, such as eyes and mouths, were cut out from black fabric.

As more pieces were sewn together, it became harder for multiple people to work on the banner at the same time. Where possible we got round this by sewing from opposite ends towards one another, or by adding detail to smaller pieces before they were attached to the banner.


Finally all that was needed was to add the border and hanging loops, and we had a completed banner. It was unveiled by the banner-makers at the Suffragette City event yesterday, after a talk by Graham and me. I particularly love the way that Minerva's owl and Werburgh's goose balance each other, and the inclusion of #MeToo brings the design right up to date.


One of the speakers was Helen Pankhurst, granddaughter of Sylvia and great-granddaughter of Emmeline. It was a real thrill to listen to Helen speak while she stood in front of our banner.


It has been a very different project from the work I usually do, a steep learning curve at times, but great fun. A huge thank you to Emma for asking me to co-ordinate the project, to Graham for his fabulous design, and to my fellow banner-makers for all their hard work. Finally, here are a couple of pictures which Emma took on the day.