I had hoped to have a finished pinafore dress to write about this week, but taking a lump out of my thumb while chopping vegetables (I always knew that cooking is both overrated and dangerous!) has seriously curtailed my ability to sew. So instead, here’s a picture-heavy post about the next of my 1950s Vogue Pattern Books; the April-May issue from 1957. As this makes it exactly 60 years old, maybe it's the perfect thing to post about after all.


The layout is similar to the 1955 issue. Of the 90 pages (plus covers) the first 20 are taken up with advertisements for fabrics. Nearly all of these adverts emphasize that the fabrics have been treated to make them easy-care. As before, they are often shown made up in Vogue patterns.


Terms such as 'crease-resistant' feature a lot in the advertising copy. Tootal have abbreviated 'Minimum Iron' to 'MI', and then really gone to town with the concept.


Horrockses have a double-page spread.


Clearly competition in treated fabrics was fierce. There are adverts for processes as well as individual cloth-making firms.


Calpreta finishes outdo them all however, with a six-page advert featuring five different manufacturers.


All five are Manchester-based firms, which reminds me that I must write a post about "Cottonopolis" sometime.

It wasn't just fabric. Jones, the sewing machine manufacturer, was based near Manchester as well. At this time they still sold models as both hand-operated and electric.


Next up is an advert for lace fabric, with what at first glance is an astonishingly racy outfit for the 1950s.


Actually the pattern looked like this; for the advert it has clearly been photographed to give the illusion of there being nothing in the middle section. 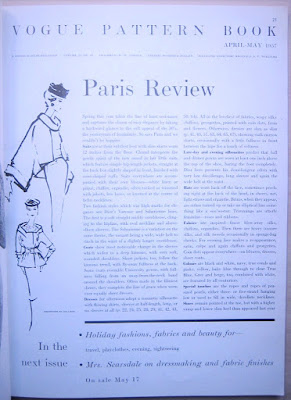 The Paris Review begins:
"Spring this year takes the line of least resistance and captures the charm of easy elegance by taking a backward glance to the soft appeal of the 30’s, the yesteryears of femininity. So says Paris and we couldn’t be happier."

Suits should apparently have, "slim skirts worn 12 inches from the floor" while ball and dinner gowns, "are worn at least one inch above the top of the shoe". So precise! Meanwhile afternoon dresses have full, flowing skirts, but all other dresses should have skirts which are "stalk-narrow".

Clearly then many of the dresses in the feature 'Your Gentle Look' are for afternoon wear, as they mostly have full skirts.


Fans of Vintage Vogue reissues will recognize the dress on the left as Vogue 1044. This is a rare case of the drawing actually looking less improbable than the photograph; the model’s waist in this photograph looks ridiculously tiny to me. Perhaps it’s just the angle?


Although the feature text states that, "clothes are being made for the woman, instead of making the woman fit the clothes", the article on foundations promptly belies this.


The text stresses the importance of "underpinnings which give line and firmness to the figure", and goes on to suggest that a woman should own at least four different foundation garments because, "To expect the same bra’ and girdle to go with everything from slacks to a ball dress is like wearing the same shoes with every outfit."

Next up, this season’s cosmetics.


I’ve included a close-up of the chart, just in case anyone wants to create that genuine spring 1957 look.


Returning to the main point of the Vogue Pattern Book, there follow two features on new patterns. All but one page are drawings only, but one feature is in black and white and one has some colour

The ‘Under 21’ section includes beauty products and hair-styling ideas as well as patterns.

I really like the idea of a cardigan trimmed with fabric to match a dress.


You may be under 21 but that doesn’t mean you don’t have to wear a girdle.


Similarly pregnancy is no excuse for letting things slide.


The latest couturier designs are showcased.

This section on skirts and blouses seems to set great store by making them in the same fabric so that the end result looks like a dress, which seems to rather defeat the object of the exercise.

The article on new sewing machines includes some familiar names such as Singer, Jones and Viking, plus some which I had never heard of, such as Fridor. Several have a zig-zag stitch; I hadn’t realized that this was available on domestic machines so early.


Another innovation is iron-on interfacing.


Most of the firms in the small ads are long-gone, but I recognize Rigby and Peller, and MacCulloch and Wallis.


Also still going strong is Cusson Imperial Leather soap. Although I don’t think that giving away leaflets on how to grow roses still features in their marketing strategy.


Finally we end where we started; the back cover is yet another advert for crease-resisting cotton from a Manchester manufacturer. This time with bonus racing demon in the background!