The Story of Wool

Last Saturday I went to the latest of the University of Chester's Textile Stories Study Days. After last year's Quilt Stories, this year was all about wool. Fittingly, the event took place at the university's new campus in Shrewsbury, which was once an important centre of the the Welsh wool trade. 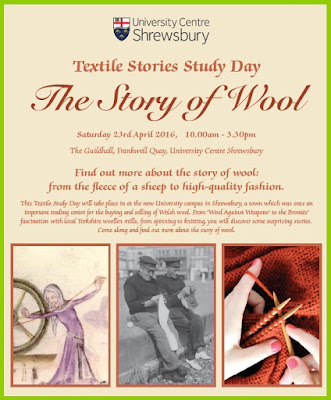 The first speaker was the textile artist Fiona Nisbet, talking about 'Wool - from sheep to fabric'. Many of the audience members who had brought their knitting along probably already knew some of the things she spoke about. For me however it was all new; how a sheep's health affects the quality of its wool, how wool differs across a sheep's body, the differences between breeds and how this affects the use their fleece is put to. I knew a little more about the process of converting fleece to yarn, but still learned a lot.


On the 400th anniversary of Shakespeare's death, and two days after the 200th anniversary of Charlotte Brontë's birth, it was appropriate that the next talk should include work by both authors. 'Woolly Stories' was presented by Dr Graham Atkin and Professor Deborah Wynne, and looked at references to wool and the wool trade in literature. Dr Atkin began with pastoral literature such as poems by Edmund Spenser, and then moved on to Shakespeare. Whereas 'pastoral' work tended to be more about ideas than actual nature, the sheep shearing scene in "A Winter's Tale" shows that Shakespeare was well aware of the wool economy, and its importance to Elizabethan life.

The Brontës were also well aware of the importance of the wool trade; they were surrounded by it in Haworth. At the time when they were growing up the town had 30 woollen mills. Professor Wynne explained how this fed into the Brontës' writing; for example in their earliest pieces the fictional realm of 'Angria', despite being modelled on Africa, had moors covered with sheep and its wealth came from woollen mills! Rather more realistically, Charlotte Brontë's novel 'Shirley' is based on the Luddite riots of 1811-12.

There was plenty to do during the lunch break; as well as a delicious buffet there were demonstrations by the Shrewsbury Guild of Spinners Weavers and Dyers, plus an exhibition of items brought along by attendees.

Moving on from the pastoral idyll, Thelma Thompson's talk about being a modern-day shepherdess on Wenlock Edge in Shropshire gave us the pastoral reality. From the obvious fact that you have to really like being outside, via the precarious economics, to the sheer amount of paperwork involved. Forget any ideas of getting away from it all to a simple life; in her first year of keeping a small flock she amassed 2.5kg / 5½lb of documentation!

The final speaker was Professor Sandy Black, author of Knitting: Fashion, Industry, Craft. Her talk 'Wool in Knitting and Fashion: From underwear to couture' covered knitting from the earliest (12th to14th century) fragments in the V&A to the 21st century revival in hand knitting. Along the way it took in 17th century brocade knitting, stocking knitting, the beginnings of home knitting patterns in the 19th century, the couture knitting of Women's Home Industries, . . . and a knitted hand grenade!

It was a fascinating day, covering so many different aspects of the story of wool. Thanks to everyone involved, and I'm already looking forward to the Story of Silk next year.
Posted by Black Tulip at 22:24