Sewing has rather taken a back seat recently. We've had a spell of hot and sunny weather, so I've been outdoors, making the most of it. After all, in the UK this may be all the summer we get!

Fortunately I do have a project to show you. It was finished a couple of weeks ago, but I haven't had the chance to blog about it.  As expected, my sort-of-bouclé skirt has had a lot of wear, so I decided it was high time to make another one. This time I tweaked the pattern a bit and added pockets because, well, pockets.

I used a piece of red needlecord I had in my stash. It came from Watson and Thornton in Shrewsbury, and I'd bought it in a fit of nostalgia, as you rarely come across needlecord in shops these days. When I started to sew I began to realise why this might be: it can have a mind of its own when you're trying to stitch across the ridges, on the pocket edge for example.


Partway through, I decided to line the skirt, and popped into town to buy lining and another reel of thread. This prompted the comment, "My, you're being restrained today", in my local fabric shop! (Note to self - buy less fabric.)

After a couple of frustrating attempts to machine sew the zip, I decided to hand pick it instead, a much better idea. In fact, I'm beginning to wonder if it's not easier to just hand pick all zips from the start, rather than as the if-all-else-fails solution. The button I found in my button box; I've absolutely no idea where it came from, but it was perfect. The buttonhole was hand sewn.


So here's the finished item. Nothing massively exciting, but I'm pleased with it, and have ideas for a few more pattern variations. 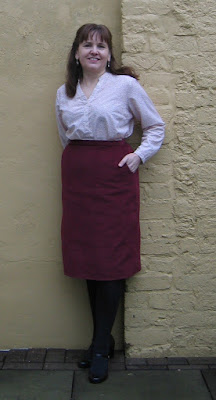 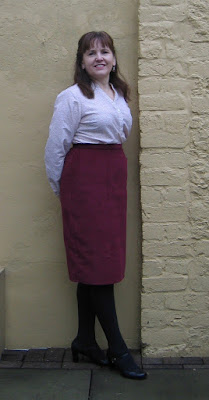 One final thing. When I'd finished the skirt I went to swap my machine back to brown thread for my rather neglected 1944 coat. This was how much thread was left on the machine bobbin. Only fellow sewists will understand just how happy this made me!