This month’s Historical Sew Monthly challenge is Silver Screen,
"Be inspired by period fashions as shown onscreen (film or TV), and recreate your favourite historical costume as a historically accurate period piece."

(Now at this point you may be wondering why I’m posting about a Historical Sew Monthly challenge when it is nowhere near the end of the month. Well, for reasons which will become apparent, I actually finished this challenge . . . early!)

For my film I chose the 1997 Henry James adaptation The Wings of the Dove. A number of clearly Fortuny-inspired dresses appear in the Venice section of the film; mostly based on the Delphos dress. Don’t get me wrong, I mostly love the costumes in this film (we'll just not talk about the corset-without-a-chemise horror at the end, shall we?), but there are a few details missing in those dresses.


Sleeveless Delphos dresses always have more of a shoulder seam than is apparent on the red dress above. The round necklines are usually on a drawstring, whereas this one appears to have a narrow facing round it.

Delphos dresses came with a belt. While there are plenty of images of the dresses being worn without a belt, it was always made from narrow printed silk in either a matching or toning colour.


However the thing which really bugged my inner costume nerd was the side seams. Delphos dresses, certainly the sleeveless ones, have a cord threaded with Venetian glass beads down the side seams, to add some weight to the light silk.


If any of the dresses in The Wings of the Dove had this, it wasn’t apparent.


I’d always thought that trying to recreate a Delphos dress would be great fun, but nigh-on impossible as the secret of achieving the tightly-pleated fabric was lost when Fortuny died. However at about the same time as the 2015 HSM challenges were issued I came across some amazing blue and silver crinkly fabric (which I used for my Fortuny shoe clips), and decided that this was as close as I was going to get.

The dress is simplicity itself; just a length of fabric folded in half and sewn down the sides, with a hole cut for the head. Originally I planned to have all the gathering in the shoulders. Then I studied the originals properly, and realised that the neckline needed to be wider, and gathered on a drawstring.


Using the main fabric for the drawstring casing would make it too bulky, so I used a bias strip of fine silk from my stash instead.


The shoulders are gathered onto a narrow strip of the same silk, cut on the straight grain.

Finding beads of the right size with a large enough hole for a cord proved impossible, so instead I made a twisted cord from embroidery floss; DMC 923 was the perfect shade. As each cord had to go from the floor to my shoulder and back down the other side of the armhole, they were long, tricky to make, and took a lot of twisting!


The belt was made from a length of plain grey silk, painted with a motif which I adapted from an Indian wooden printing block I own. Painting the silver directly onto the silk didn’t show up very well, so I had to paint the design in white first, and then go over it with the silver.


When it came to taking pictures, I wasn’t quite sure what to do my hair, as I really don’t look good without my non-period-appropriate fringe. Fortunately while researching Delphos dresses I found this 1910 photograph of the French actress Régine Flory.


So finally we come to the reason why this challenge was completed so early (well, early for me), and other challenges were put back to next month’s ‘Re-do’ in order to accommodate it. Last month Mum and I went back to Venice! So of course, the dress (and the shoe clips and shoes) came with us.


We stayed away from the main tourist spots, but it was still surprisingly difficult to avoid modern life sneaking into the images (although apparently the makers of The Wings of the Dove had the same problem – if you look at the top right of the first image in this post, you can clearly see a modern motorboat!). So a massive thank you to Karen Iuppa for removing the 21st century from the pictures taken on the bridge. 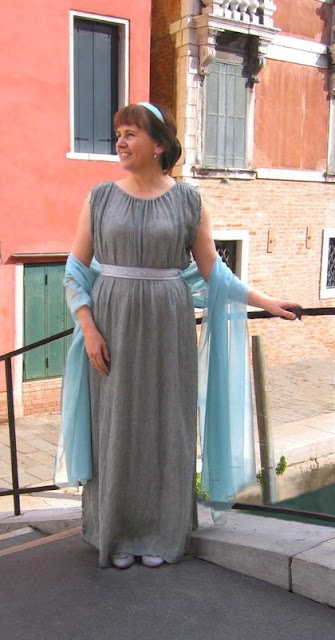 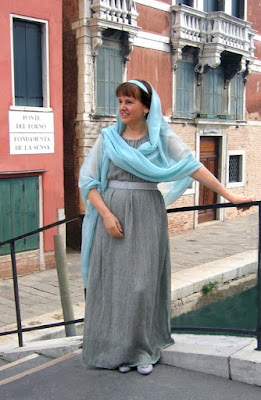 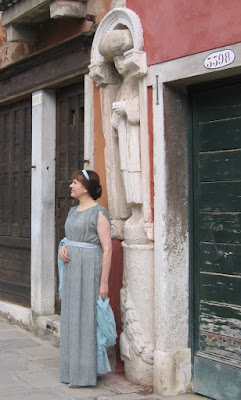 The small print:
The Challenge: Silver Screen
What's your onscreen inspiration?: The Wings of the Dove
Fabric: Unknown synthetic with metallic weft for dress, silk for belt
Pattern: Doesn't really have one as it's essentially just a length of fabric
Year: Early 20th century
Notions: Glass beads, embroidery floss for cords, fabric paint.
How historically accurate is it? Delphos dresses were made from silk so the man-made fabrics let it down, I'd say 70%
Hours to complete:I always forget to count
First worn: In Venice, to take the photos
Total cost: Dress fabric £30, silk for belt £11.25 (with a lot left), beads £2.99, embroidery floss £2.85, fabric paint £5.40 everything else from stash, so £52.49
Posted by Black Tulip at 18:11