If you spend time diligently researching / drooling over (delete as appropriate) historical costume on Pinterest, you soon become aware that a lot of the images on there are from auction house sales. I had always assumed that all of these auction houses were in America, but when last Christmas Mr Tulip bought me Vintage Fashion & Couture: From Poiret to McQueen, I discovered that Kerry Taylor Auctions is actually based in London. I thought then that it would be really interesting to go to an auction sometime, and last Tuesday I finally did it. All of the images in both last week’s post and this post are from the auction catalogue.

Before the auction itself there are the viewings. These enable would-be bidders to examine the lots, get an idea of their condition, and for anyone bidding for a lot with a view to wearing it, check if it fits.

Viewing took place at the auction room on Sunday afternoon, all day Monday (when I went), and Tuesday morning. I really wasn’t sure what to expect, but I certainly didn’t expect what I found. Some of the lots were on mannequins, such as this 1952 Balenciaga bridal gown, but placed in such a way that you could get a really good look at them.


Other items, such as this Art Deco evening coat were on hangers on clothes rails.


There was a large table, where you could lay out a lot if you wanted to examine it in detail. The online catalogue contained many excellent images of the lots, including plenty of back views and close-ups, but even so nothing had prepared me for the quality of finish on many of the lots.


Lots which couldn’t be hung up, such as bags, shoes and magazines, could be examined on request.

It was just astonishing; where else could you get within sneezing distance (don’t worry, I didn’t!) of such a variety of couture clothing? I met two lovely ladies who also sew and like me had come along for a look; and we were soon busy taking items off the rails, peering inside to look at linings and construction, and going into raptures over couture details such as these exquisitely finished seams.


The staff must have been very busy in the three hours between the end of viewing and the start of the auction. In this time most of the mannequins were removed, desks were set up for the phone and online bidding, the auctioneer’s podium was put in place and the room filled with rows of seating.

As with the viewing, I didn’t know what to expect. There are the urban myths of someone going to an auction, absentmindedly scratching their ear, and suddenly finding that they have spent some enormous sum on the star lot. Fortunately for my nerves, it soon became apparent that this wasn’t going to happen. Kerry Taylor clearly knew a number of the attendees from previous auctions and from them, but them only, it seemed that the merest nod was enough. Lot 39, a pair of frame-knitted salmon-pink silk stockings, was the subject of a bidding war which took place entirely within the auction room. Despite the fact that both bidders were clearly sitting in front of me I never managed to work out who they were, as I could see no movement whatsoever! The lot was eventually sold for £3,200.


Other people adopted the vigorous-paddle-waving style of bidding. As well as the bidders in the room there was one person handling online bids, plus a number of others dealing with the telephone bidders. If there were multiple telephone bidders, it could get quite noisy. Despite all this, and the fact that with almost 400 lots it all had to proceed quite quickly (even so, the whole thing took over four hours), there was never any danger of a bidding mishap.

The auction was split into four sections; accessories and luxury brands, fashion 1700s to 2000s, Japanese fashion, and various designers. The final section ended with a number of Alexander McQueen pieces.

The accessories and luxury brands section contained several Chanel ensembles with matching handbags. Curiously, in each case the handbag went for more than the ensemble; I assume because they were bought by dealers and the bags had a greater potential for resale than a size-specific suit.

The majority of the items in the fashion 1700s to 2000s section were in fact twentieth century. One of the earliest of these was a Jeanne Lanvin orientalist brocade evening coat from 1915, believed to have been exhibited in the French Pavillion of the Panama Pacific International Exposition, San Francisco.


This failed to reach the minimum guide price of £10,000 but a later Lanvin piece from summer 1938, a sequined black taffeta evening gown with criss-crossed bands of pink and silver braid forming a knot on the bodice, did much better, selling for £1,500. 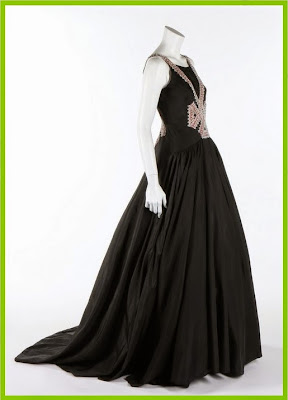 In previous auctions, Lucile fashion sketches have reached prices far beyond the guide price, and this auction was no different. The three lots of sketches on offer this time fetched between three and five times their maximum guide prices.

Three other paper-based lots, issues of British Vogue from the 1930s, 40s and 50s, also went for well over their maximum guide prices. The 1930s lot of 52 issues sold for £9,000, presumably reflecting their rarity.


(Is it just me, or does this look incredibly like Lauren of American Duchess?)


Despite it being obvious by this stage that an ill-timed cough wasn’t going to cost me a small fortune, I still found myself sitting motionless when lot 81 came up, just in case. This was the star of the show, a Schiaparelli embroidered coat from the Zodiac collection of Autumn-Winter 1938-39. 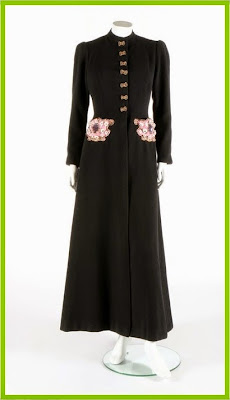 Made of black wool tweed and lined with black silk, it is entirely plain apart from the seven bronze-effect rolled porcelain buttons, and the riotous pink velvet Rococo inspired pockets. These are edged with Lesage embroidered gilt metal strips and at the centre have a violet sequined female profile, also edged in gilt strip. The final part of the decoration is gold lustre decorated Sevres porcelain flowers. Yes honestly. Porcelain flowers. I found myself wondering if the coat had originally come with a small bag of spare flowers in case of accidents, in the way that garments today come with a spare button attached to the label! 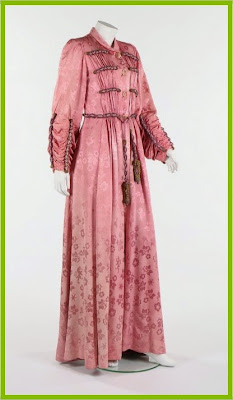 Not even the fact that Marlene Dietrich once owned an identical coat (and wore it while inspecting soldiers’ legs on a morale-boosting tour of North Africa in 1944) raised it above the minimum guide price of £10,000 however.

The auction room had thinned out a fair bit by the time we reached the Japanese fashion section, although there was still a lot of online and phone bidding. In fact lot 202, an Issey Miyake raspberry-pink moulded plastic breastplate/bodice from Autumn-Winter 1980, had six telephone bidders. The ensuing bidding war saw it go for a mind-boggling £38,000. 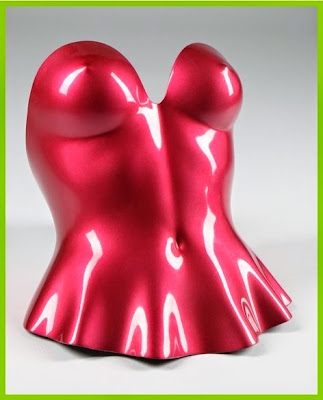 I must admit that Alexander McQueen had sort of passed me by. I was aware that his work seemed to cause a lot of fuss in the press, both for and against, but that was about it. However a couple of his pieces for Givenchy just blew me away.

This silver beaded evening gown from Spring-Summer 1998 is made of silver and ivory sari-silk with an upper bodice of flesh coloured tulle embellished with fish-scale loops of silver and crystal beads. The drape and use of the sari fabric is brilliant, while the beadwork is just exquisite. 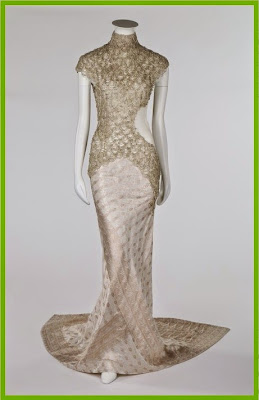 This one, I must confess, I thought was a jacket. Apparently it’s a dress, from Autumn-Winter 1997-98. Either way, it’s stunning. For me the use of the fabric is the key; the explosion of the tartan from the central point and the pattern matching both front and back is masterful. The sleeves bring to mind a nineteenth century dolman, which is probably what gave me the jacket idea. 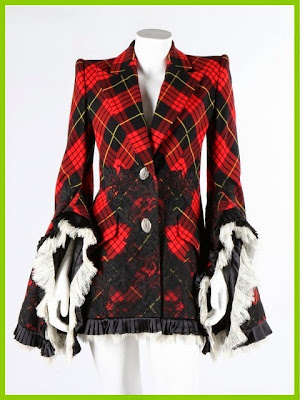 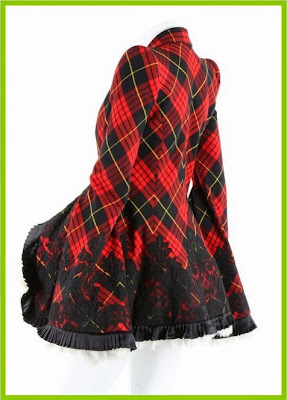 For all of this though, my favourite pieces from the whole auction are much more restrained. First up is this Michel Goma couture grey and white polka dot silk dress and optional day bodice from the late 1950s. Plain, elegant, interesting and beautiful construction details - I’d wear this in a heartbeat. (Or I would if I had a 55cm / 22” waist.) Sold for £300. 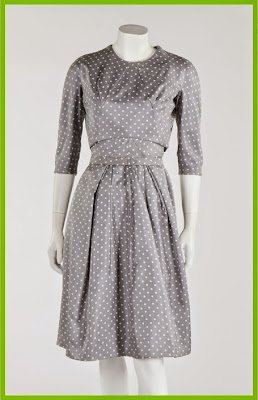 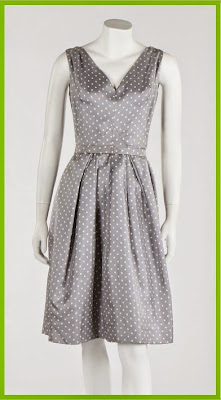 The appeal of this early 1950s Norman Hartnell taffeta ball gown isn’t just the fact that it’s almost in Black Tulip ‘house colours’ (although it helps), but rather in the swirly draping, and the way that the drapes open out into loose pleats. Sold for £1,000. 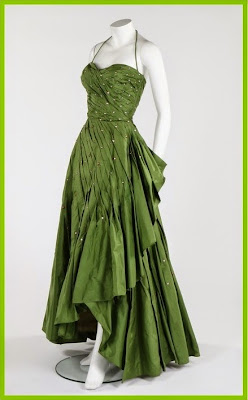 However the piece which I really, really loved was this Pierre Balmain circa 1947-48 black wool crepe day/dinner dress, complete with an eye-watering 24 tiny bound buttonholes (in a crepe which would be a nightmare to work with, and fray as soon as look at you). I don’t know why, but this just really sang to me. This could be another make-a-dress-from-a-photograph exercise, although I might have to do something about all those buttonholes. Sold for £600. 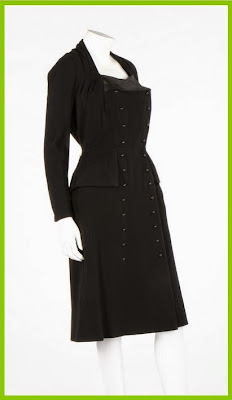 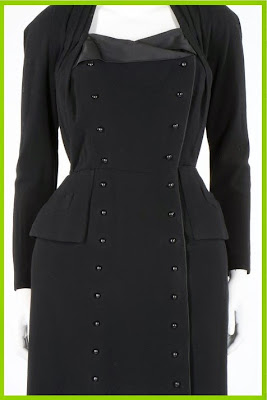 All in all, I had a fabulous time at both the viewing and the auction itself. I was expecting something rarefied and a bit snooty, but it wasn’t at all like that. In some ways it was quite homely; several thousand pounds worth of vintage Vogue magazines were carried off in a cardboard box labelled “Crawford’s Cheese Savouries”! The staff were all lovely, and Kerry Taylor herself did a great job of making novice bidders feel at ease. If you find yourself in London when one of these auctions is on, at least go to the viewing. I’ll probably go to another one in the future, and may even buy something. Intentionally.
Posted by Black Tulip at 01:02