The current Historical Sew Fortnightly challenge is All That Glitters. My project for this was intended as a second entry for the Re-do challenge, but I didn’t get it completed in time. Fortunately it’s definitely glittery, so fits in here as well.

Way back in May, for the UFOs and PHDs challenge, I posted about a pair of shoes which I had trimmed to give them a 1920s look. (Given that they were originally intended for the Tops and Toes challenge in April, but fell by the wayside due to other things, these shoes must hold some sort of record for being the project associated with the most HSF challenges ever!)

Even though the design was based on a genuine 1920s trim, I wasn’t happy with the end result. So I applied my usual approach of putting them away for a while, and reviewing them with fresh eyes. And I still wasn’t happy. The decoration was far too solid and heavy.


One of the pairs of shoes which I’d come across in my research (thanks again to American Duchess's amazing collection of Pinterest boards) was just decorated with beads, and a few clear stones. 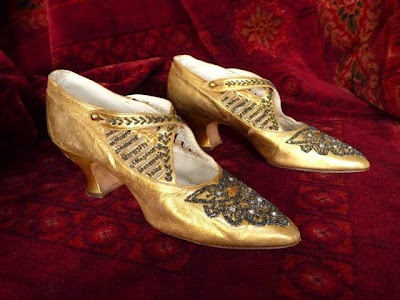 Then I came across some shoes in Jazz Age Fashion: Dressed to Kill with a similar decoration, and decided that this was the way to go.


Because it would be too awkward to sew the stones and beads directly onto the shoe I used the method that I’d used previously; working on a piece of silk gauze with a piece of ivory net over it, stretched in an embroidery hoop. I marked out the guidelines of the design in blue thread.


The stones were sewn on first, with a long tail of thread left at each hole. Then the beads were strung onto one of the tails, and the other tail used to couch the string of beads into place.


When the stitching was complete, I removed the blue thread and cut away the excess gauze. Initially I only did this around the outside of the design. However because there was so much blank space in the inside, when the design was laid over the shoe the gauze showed up as a different colour, so I trimmed away the section in the middle as well. Finally the net was cut to slightly larger than the design, the raw edges were tucked under, and the net sewn onto the shoe using a curved needle.


This time I also beaded the straps and the edge of the shoes, although neither section was wide enough to bead around the stones. Instead I strung the stones and beads together, and then couched the string into place. Although the shape of the shoe is too round-toed for a fully 1920s look, I’m much happier with the new version.

The small print:
The Challenge: All That Glitters and Re-Do
Fabric: Silk organza and nylon net
Pattern: My own
Year: 1920s
Notions: sew-on plastic stones and gold rocaille beads
How historically accurate is it? Much more than what was there before! 80%
Hours to complete: About 6
First worn: Not yet
Total cost: Four packets of different size stones at £1.16 each, organza and net left over from Tops and Toes challenge, beads from stash, so £4.64
Posted by Black Tulip at 22:29