Having cut the curtain pieces out, it was time to start making them up. The first thing to do was hem both the curtain fabric and the lining. The lining had a 7cm / 2¾" double hem, and the curtain itself a 10cm / 4" hem. I machine stitched the lining hem, but blind hemmed the curtain hem by hand, leaving about 10cm of the curtain unstitched at each end.

Note: It's important, especially with a fabric like this which doesn't have an obvious right way up but does have an obvious directional pattern, to check, double-check and even triple-check that the hem is at the same end on both pieces. Ask me how I know!


It was while doing these checks that I noticed something strange in the fabric. Either by accident or design, the pattern is not printed horizontally across the fabric, but moves upwards slightly as it goes from left to right. To explain what I mean, here is a completed curtain, folded into a tube. The curtain was cut exactly on the cross grain of the fabric, and the hems are entirely even, but there is a difference in the pattern of 3cm / 1¼".


Fortunately I had cut the curtains far too long anyway, to take account of the pattern repeat, so I was able to shorten one of them at the bottom so that the pattern matches up in the centre. It does mean that I now have a definite right curtain and left curtain, though.

Once the pieces were hemmed, the next job was to sew the lining and main curtain together. I did this first along long the edges which will meet when the curtain is closed. I pinned the curtain and lining right sides together with selvedges aligned, and sewed them with my overlocker (serger), cutting off a tiny amount as I stitched. The selvedges of curtain fabric are often so tightly woven that they cause the fabric to pucker slightly; trimming off the very edge with the overlocker takes this puckering out.

The lining on the completed curtain should be slightly narrower than the curtain itself, and the fabric should wrap round to the back of the curtain, like a facing on a garment. 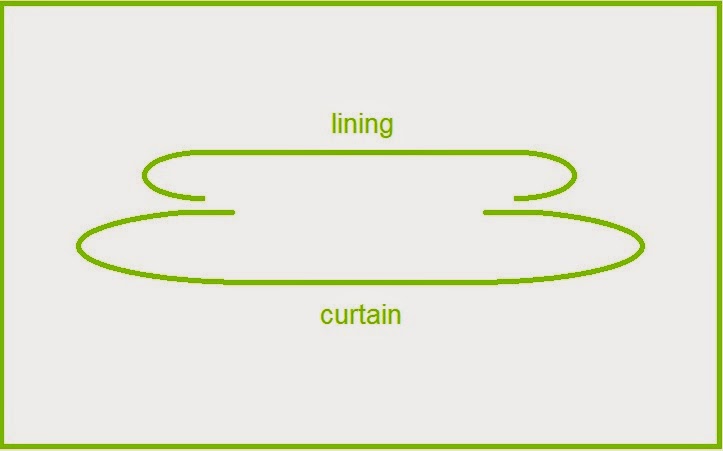 To work out how much lining to take off, I laid the curtains face down, side by side, stitched edges together, and adjusted the widths until the pattern matched. Then I pinned this edge, smoothed the two fabrics across to the other selvedge, and pinned and overlocked this edge.


Then I turned the curtains right way out, and pressed the sides. Finally I mitred the corners of the curtain fabric so that the edge fitted under the lining, and finished hand sewing the hem.


To work out the curtain length, I held one up against the track, and pinned where I would want the curtain hook to be. The hook would go in the bottom set of loops on the curtain tape, I laid the tape against the curtain, and marked 3mm / ⅛" above the top. This would be the top of the curtain. I folded down the excess and pressed along the fold, but didn't cut any fabric off at this stage.

I made cord pockets out of the cut off lining fabric. These are a tube of fabric with one end sewn up, then turned right way out and folded in two, with one side longer that the other. The sides are sewn to form the pocket, and the raw edge is slipped under the bottom edge of the curtain tape. When the cords of the tape are pulled up to gather it, the excess cord is then put in the pocket to keep it out of the way. I decided to put my pockets at the ends of the curtains, rather than in the centre.

Finally I sewed down one short edge of the tape, along the bottom, and up the other side. The top and bottom of the tape must always be sewn in the same direction, to prevent it from puckering.


Unfortunately the room itself is a very long way from complete, so here is just one curtain, ungathered, to show what it looks like. Something more exciting next week, I promise!