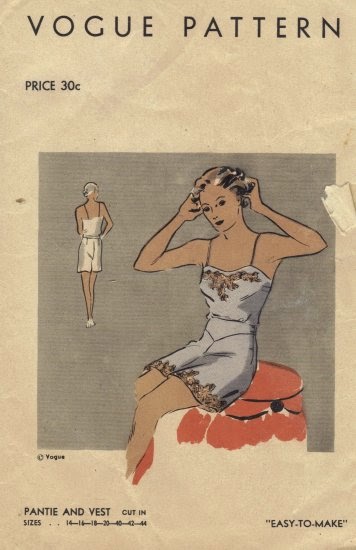 The small print:
The Challenge: UFOs and PHDs / Bodice
Fabric: Satin fabric of man-made composition
Pattern: My own
Year: 1930s
Notions: Embroidery silks, thread
How historically accurate is it? I’m happy to give this a higher score than I usually do. The pattern is based on photographs of 1930s camisole, construction and fabric are accurate for the period, and the embroidery design and technique are taken from a 1930s needlework book. The straps and hems are too wide, due to my lack of skill in bias sewing, so 95%.
Hours to complete: No idea. I always forget to count, and I don’t really want to think about some of the hours I spent on this.
When I started it and when I finished it: Started 10 March, finished 27 April (with a long gap in the middle)
First worn: Not yet
Total cost: Fabric £6.83 (with quite a lot left), thread £1.60, everything else from stash, so £8.43
Posted by Black Tulip at 23:12