Dressed for War - the story of British Vogue's wartime editor

No sewing again this week. Not because I'm busy with Christmas preparations; in fact, quite the reverse. I've come down with several different infections all at once - none of them serious on their own, thankfully, but combined enough to make me feel quite ill. After struggling on for a couple of days, I just had to accept that whatever hasn't been done for Christmas by now just won't get done, and there was nothing for it but to rest, and let my body recover.

What this did do was give me time to read, and to finish a book which I started some time ago, Dressed for War by Julie Summers. This is a biography of Audrey Withers who, despite being editor of the British edition of Vogue throughout the 1940s and 1950s, is now hardly known at all. 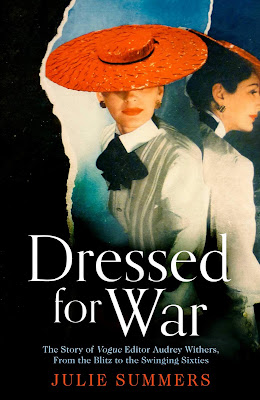 Withers was born in 1905. After graduating from Oxford in 1927 she initially worked in a bookshop, before deciding that she really wanted to work in publishing. Her first foray into this world ended when her employer made the decision (entirely legal at the time) that the role needed to be filled by a man, and sacked her. Fortunately, her next job, as a subeditor at Vogue, was much more successful; she spent the rest of her working life there.

Although Dressed for War describes itself as the story of Withers' editorship "From the Blitz to the Swinging Sixties", the vast majority of the book concerns itself with the wartime years. Her predecessor in the role was Betty Penrose, an American, and the picture Summers paints of British Vogue (known within the company as Brogue) at the time is one of a publication quite strictly overseen by its U.S. parent. When Withers took over in 1940, the difficulties of communication with the New York office, and the requirement to reflect the very different British wartime experience from that of America, meant that Brogue increasingly needed to find its own voice. Summers deftly weaves together the stories of both this and the practical issues of producing a magazine during wartime.

For me, of course, one of the most interesting of the latter was the bombing of the Vogue Pattern Book premises in April 1941. At the time, Vogue had approximately 800 different patterns in production, and this was a highly profitable element of the overall business. 350,000 patterns were destroyed in the ensuing fire, but fortunately duplicates of the master patterns and some cutting machines had been stored safely outside central London, and production was quickly restarted.

Not all of the destruction which Brogue suffered during the war was caused by bombing raids, however. Britain's supply of wood pulp from Canada, needed for paper manufacture, had been greatly reduced, and there was a drive to not only save paper but also to donate old paper for salvage. As a result, Withers decided that the entire pre-1942 archive of British Vogue should be pulped for the war effort!

Brogue's wartime content was not just patterns, fashion and making-do, however. Withers hired Lee Miller as a war correspondent, and Miller's work, and the relationship between the two women, is covered in depth.

Summers is clear about the amount of help and information she received from the Condé Nast archivists, both in London and New York, and my one criticism of the book would be that she may on occasion have accepted information at face value without digging any deeper. Nast, for example, stated that it was he who introduced different sizes in dress patterns and that prior to this none of his rivals, including Butterick offered anything other than a size 36. Nast was born in 1873, was educated to university level, and then spent 10 years working for Collier's Weekly before moving to a publication called Home Pattern. By my reckoning, this would have been 1903 at the earliest. According to A History of the Paper Pattern Industry, Butterick introduced sized patterns for women and girls in 1866, and the Commercial Pattern Archive includes a Butterick pattern from 1872 in a size 31. This is hardly a critical detail, but enough to make me wonder about other claims.

As I mentioned earlier, Audrey Withers is now little known, unlike some other female journalists of the time such as Alison Settle. However, reading this book I discovered that she had actually played an important part in forming my own fashion choices. At some point in the latter part of the 1970s, my mum acquired a copy of In Vogue: Six Decades of Fashion by Georgina Howell. I used to love looking through it, but my favourite image of the entire, substantial, volume was this one.


To me, this was the epitome of pared-back, drop-dead elegance, and still is. The building is Temple Church, destroyed in the same bombing raid that wiped out Vogue's patterns. The suit is by Digby Morton, one of the British designers who would later be part of the 'Utility' clothing scheme. And the model is not actually a model at all but Elizabeth Cowell, one of the BBC's first television announcers (click here to hear a snippet of her incredibly refined voice). Most importantly, Summers has discovered that the idea for the shoot came from Withers herself. In a further link, Georgina Howell came to work for Vogue by winning their annual talent contest, which Withers had introduced. My love of 1940s styles can be traced back to this one photograph, and therefore, it turns out, to Audrey Withers.
Posted by Black Tulip at 22:01