Vogue and the older dressmaker - 1934 edition

Following on from last week's look at fashions for the older woman in the 16 May 1934 edition of Vogue, this week I'm looking at the attached Vogue Pattern Book. According to the article in Vogue, it "simply teems with good models for the older woman". Certainly, as I put this post together I realised that it was getting longer and longer; so grab a cuppa, make yourself comfortable, and let's investigate. Click on any of ther images to see a larger version.


Unlike Vogue itself, the Pattern Book has a table of contents. None of the features listed make any reference to older women: it is only the article in the parent magazine which suggests which models would be particularly suitable for 'matrons', and all the quotations in this post are taken from that. This is the first feature.


Of these, S-3707 has "all the right points for the older woman", although there is no indication of what these points might be. This is case thoughout: no explanations are offered as to why certain models are suitable for older wearers and others are not. 6650 "would make an invaluable summer dress", and S-3713 "shows an idea the older woman should certainly make use of".


S-3685 is described just as "a printed silk suit", and 6663 as "for evenings". Although 6663 appears to have quite wide sleeves, I still can't help feeling that the ornate sleeves of 6617 (shown on the left) would suffer from being squashed inside them! Another view of 6663 is shown on the next page.


It's back to afternoon wear with S-2703, "a formal afternoon coat of the most becoming lines", and Couturier pattern 300 "a delightful tunic frock for afternoon wear". A rare explanation is provided for the inclusion of 293, another Couturier pattern; it is described as "a good choice for the older woman with too much weight at the hips, as the bulk of the sleeves would help to conterbalance it".


A printed dress with a matching jacket is described as "always a splendid idea for the older woman" - again with no explanation offered as to why this might be. 6611 had also appeared in a colour feature on new patterns in the 4 April issue of Vogue.


Of the patterns featured, 6627 and 6629 are both "suitable for the woman who is no longer young", while 6623 is described as "so good that it will be remarkable if every older woman does not want to carry it out in her own pet colours". The evening cape, 6502, "will appeal to the woman of any age".


There are a few pages printed in black, white and one other colour, but there are only four multi-colour pages in the 48-page magazine. 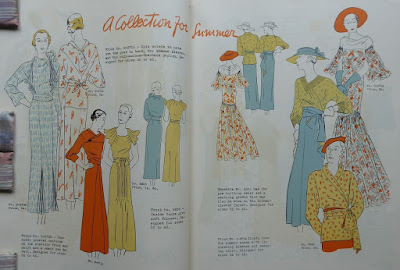 Only one dress on these four pages is deemed suitable for the older woman: a "good design for a silk crepe frock".


"Jabot fronts are nearly always becoming to the not-so-young", and 6636 has "everything to recommend it".


Among the printed frocks and coats, the "older lady has still another choice in Ensemble No. S-3698".


This is another pattern which appreared in the 4 April issue of Vogue.


Moving on to more formal fashions for afternoon and evening.


299 and 6633 "should be of special interest to the matron", while 6639 is a "specially good design for the many occasions when a formal evening dress is not required". However as it is described beside the illustration as having a "deep front décolletage", I was surprised to see it being recommended for the older woman.


"The frocks on pages 26 and 27 and on 30 and 31 look charming on their youthful wearers, but a number of these would be equally good for the older woman".


6615 is a dress "of endless usefulness", and 6595 "with its crisp frilled front, will suit many women who are no longer young". (By now I am entirely confused. Are soft lines or crisp lines the look to go for?)


6611 appears yet again, in the 'Easy to Make' section. Of these, all of the patterns on the left page, and the centre one on the right page, are deemed good for the older woman.


So there you have it. I must admit that at the end of this, I'm still not a lot clearer about what features the older dressmaker in 1934 should look for in a pattern. However, I'll leave the last word to the original article in Vogue, and the conclusion of its response to the reader who asked for suggestions on clothes for the middle-aged.