I first went to see the exhibition A History of Fashion in 100 Objects at the Fashion Museum Bath two years ago. At that point it was still being set up; some exhibits were not yet in place, and others had no information. As a result my post about the exhibition was incomplete. So here, a mere 106 weeks later, is something to fill in some of the gaps!

When I last visited, this case only contained one dress, a silk plush 'aesthetic' dressing gown from the 1880s. The mirrored walls of the display case meant that you could see it from every angle.(Apologies for the rogue reflections in some of these photographs.)


The case is now far more tightly filled, but the reflections often still allow you to see front and back. This striped day dress looks to me as though it has come straight out of a Tissot painting.


This later dress is positioned so that you can see the bustle drapery, and also the bodice front panel.

This 1890 Worth dress belonged to Mary Chamberlain; the third wife of politician Joseph Chamberlain, and stepmother of Neville.


She wore it when she had her portrait painted by Millais.


Clearly I am just slow on the uptake, because when I first saw this next dress I wondered what was so special about it. . .


. . . and then I wondered why there was an embroidered wrap lying on the floor next to it.


Eventually it dawned that the two pieces are, literally, connected. The photograph of two debutantes behind the dress should have made it clear; this is a gown for presentation at court. Duh!


A different kind of white dress is displayed nearby.


According to the exhibition notes, court dressmakers such as Welborn were the London equivalent of Paris couturiers. However they did not limit themselves to court dress. This Fancy Dress costume on the theme of 'fire' was made by another court dressmaker, Reville and Rossiter. The beaded dress to the right is by Paquin.


As with the earlier sections of the exhibition, it's not just about clothing. There are accessories on display as well.


Also from the 1930s, it's back to white dresses with this stunning bias-cut number. I was just in awe of the way it is cut, the dart placement, the drape, the complete lack of wrinkles on the seams - everything really.


The second wedding dress on display is very different from the first. This dress was worn by Margaret Allen when she married in 1940.The style of the skirt yoke is very similar to the infamous Dress of Frump, but vastly more successful: it did make me wonder if I should try drafting my own skirt.

Continuing the World War II theme is this tweed Utility suit. Next to it is an altogether more opulent jacket, made by Lucien Lelong, which belonged to Vivien Leigh.


The exhibition has clearly been updated a bit since I first saw it in 2016, because the 100th object is the 2017 Dress of the Year. The 'dress' is actually an ensemble from Dior’s Spring-Summer collection, and consists of a white cotton 'We Should All Be Feminists' print T-shirt, along with a black wool jacket and black tulle skirt. In a nice touch, it is displayed alongside a 1947 Dior black wool jacket and skirt, marking 70 years since the launch of the New Look. 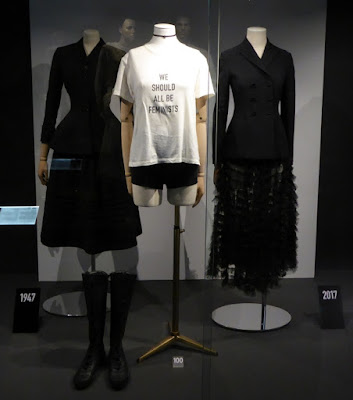