It's been a while now since the last items for the University of Chester chapel were finished, but the sewing group has a new project!

Next year will be the centenary of the end of World War One, and the project is to commemorate the 77 staff and students who died in the war, and whose names are listed on the memorial in the chapel. We intend to do this by making 77 poppies, which will be set into a display in the chapel. 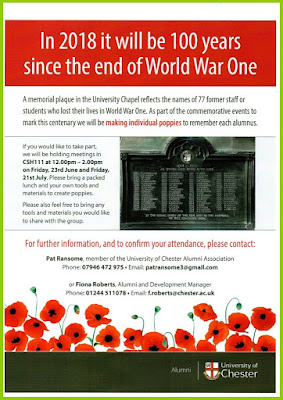 The project is being coordinated by Pat Ransome of the Chester Alumni Association. To give us an idea of the end result, Pat cut out 77 poppy templates from red card, and we tried laying them out. It quickly became obvious that the original idea of arranging them into a cross would create something far too large. The current plan is to place them in a replica of the 'campaign chest' which every soldier had to hold his possessions. The chest will measure 24" by 24", and with a certain amount of overlapping, the 77 poppies will fit into this.


So far we have four completed poppies, but we have until mid-January 2018 to complete the other 73.


The only limit is that finished poppy should be 8-10cm in diameter. The poppies can be made in any medium: embroidery, knitting, tatting etc. In fact, the more diverse the techniques the better, as we are keen to remember the 77 as individuals. To this end, the Alumni Association has been researching the names on the memorial, and has even managed to contact the descendants of three of the men listed.

One thing which intrigues me is that the poster shows the memorial with the original 78 names. The story goes that at a reunion of former students in the 1920s Mr R. N. Bullock turned up, saw his name on the memorial, and confirmed that he was very much alive! We haven't yet decided how, or if, we will commemorate this detail.