(And it's a shocker, so you might want to sit down first.)

I have actually finished a hat!!


Warning, this is a long and picture-heavy post. Mostly due to my being so thrilled to have finished a hat.

Way back in February, I went on a course at Hat Works to make a brimmed hat. Through no fault of the tutors it wasn't a complete success for me, and the crown and brim have languished in my workroom, separate and unloved, ever since.

But . . . I don't like to give up completely, so when the course was offered again in October I decided to give it another go.

First of all, we had to measure our heads and choose a suitable brim block. The measuring was easy, but it's really hard to envisage what the finished brim will look like from the block; not least because it's upside down.


I chose quite a wide brim. This proved to be a challenge, as the wool hood which the brim was made from was a cone shape rather than a flatter capeline. Marie (one of the tutors) and I had to really stretch the hood to fit it to the block.


Marie assured me that she's only ever had a hood rip on her once. Happily this didn't become the second time, and after a lot of steaming and stretching, and no muttered cursing whatsoever (oh no, as if), I ended up with a blocked brim.


Then we could move on to the crowns. All of us on the course decided to match our crown and brim colours. The crown I chose was a basic dome shape, so I added some pinched folds on the top to make it a bit more interesting.


The blocks were than all left to dry overnight.


The next morning, we started by taking the brims off the blocks. Even though they were now the right way up, it was still hard to envisage a finished hat.

The top of the hat was cut off, leaving a small vertical section, and a petersham band was sewn inside. (Bronwen, who organizes the courses, did a wonderful job of sourcing petersham which matched the hood colours - thanks Bronwen!) Then the outer edge of the brim was trimmed and wired.


Then we turned our attention back to the crowns; taking them off the blocks and trimming away the excess. This was as far as I got on the course, but the rest could be done at home.

The crown was attached to the brim and a further band of petersham, this time on the outside, added to cover the join.


The only problem was that I wasn't entirely happy with the brim shape. Being turned up all the way round didn't really work for me; I felt like an escapee from a mariachi band! (I forgot to take any photos of this stage, honest, so you'll just have to believe me when I say it wasn't a good look.) Fortunately I was able to adjust the stretch of the brim against the wire a bit, and tip part of the brim down at the front. Once I was happy with it, I covered the edge with more petersham, this time folded in half lengthways and steamed into shape.

Then it was onto the trimming. I knew that I wanted to make my trimmings from the leftover felt of the two hoods, but wasn't sure what to do. Happily my habit of never throwing bits away, no matter how tiny, provided the inspiration.


I really liked the idea of a spiral of felt, but there was one problem. The way the hoods are dyed leaves a white section in the middle of the felt; either excess shellac or where the dye hasn't penetrated, I'm not sure which. If I used the cut edge of the felt, this would show.


The outer edge of the hood isn't as crisp, but has colour all the way through, so I used that instead.


Most of the coil is on the crown, but I extended it onto the brim as well. The ends are tapered so that it appears to run into the hat.


I also added a small trim at the back; partly to cover the petersham join and partly to tie in with the fold which ran halfway down the crown. 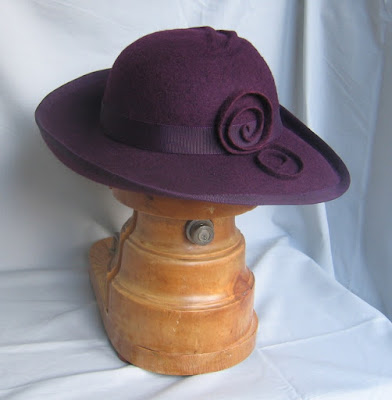 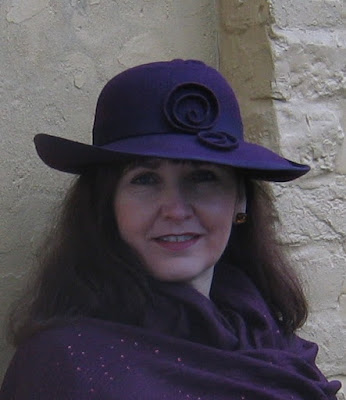 So pleased in fact that I might finally finish my first attempt!
Posted by Black Tulip at 22:02