When I go to a vintage fair, it's not just old dress patterns I'm on the look-out for. I also love looking at women's magazines, because you can glean so much information on everyday life from them. So when I recently came across 'Home Chat', a new-to-me publication, of course I bought a copy.


My November 1944 copy was published by Amalgamated Press, but according to this website the title was originally published by Alfred C. Harmsworth, founder of 'The Harmsworth London Magazine', which I wrote about here.

It was a weekly magazine, as the picture shows it was quite small, and the cover was the only colour printing. The 3d cover price would be 51p / 63 cents today.

There are a few 'state' advertisements, such as these from the Ministry of Food and the Board of Trade. 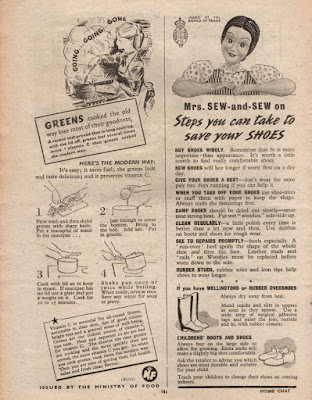 But in the commercial advertising it's interesting to see how manufacturers got round the problem that there wasn't actually much available to sell.

Some acknowledge that supplies are limited, but still available. 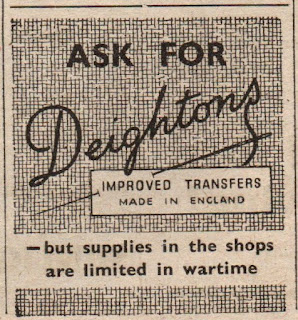 Some look forward to a time when their goods will be more widely available (and make reference to the current state of the war). 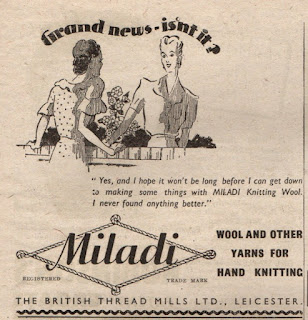 And some are purely there to keep the brand name in the reader's mind at a time when I assume the goods were not available at all, because the manufacturer was engaged in war work. 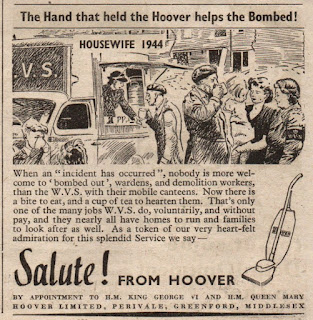 One of the articles in the magazine is called, 'I'm Looking Forward To -', and is written by Charlotte Haldane. Although Mrs Haldane had worked as a war reporter you wouldn't know it from the tone of this piece. Instead she looks forward to the end of clothes rationing and the arrival of "wonderful and fantastic new materials" which have been developed during the war. One such material is nylon; "a product of coal and air" - a description which must have totally confused anyone who didn't already have some idea of what nylon was.

However it's not all 'in with the new'. She then goes on to talk about the features of war-time dress she would like to keep; namely the simpler, younger-looking designs. I wonder what she made of the New Look? 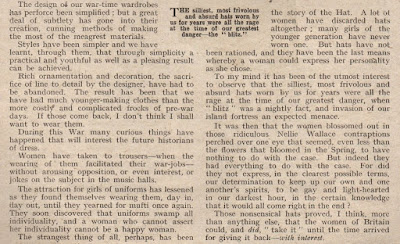 The part of the article which interested me the most was where she talked about what would interest "the future historians of dress", especially this:


"Women have taken to trousers - when the wearing of them facilitated their war-jobs - without arousing opposition, or even interest, or jokes on the subject in the music halls."

Her views on hat wearing are also interesting, especially as they tie in with what I've found out previously about hats in wartime. Nellie Wallace was a real person; a music hall performer well-known for her hats. So possibly it was the hats, rather than the trousers, which were joked about in music halls.
Posted by Black Tulip at 21:42

Email ThisBlogThis!Share to TwitterShare to FacebookShare to Pinterest
Labels: 1940s, books and magazines