Missoni at the Fashion and Textile Museum

There will be some actual sewing on this blog again soon, I promise! It's just that I'm currently working on something I can't post about; all will be explained in a few weeks' time.

I've been down to London for a few days, and one of the things I went to was Missoni Art Colour at the Fashion and Textile Museum.

The exhibition was originally shown at the MA*GA Art Museum in Italy last year, and takes as its starting point the Missonis' interest in modern art, and how this influenced their designs. It begins with a display of works by modernist painters, including Sonia Delaunay, Lucio Fontana and Gino Severini.


The exhibition also includes some of the large knitted patchworks which Ottavio Missoni made from the 1970s onwards, as well as clothes made from the same process.


There are colour studies, and knitted samples.

But the most striking element of the exhibition is the pyramid of mannequins, 42 in total, wearing Missoni knitwear designed from 1953 to 2014. The mannequins are displayed in a constantly changing light, moving from almost darkness to glaring brightness, which adds to the slightly other-worldly feeling of the display. 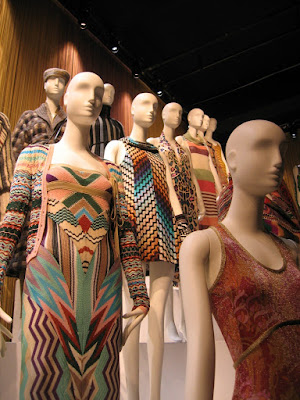 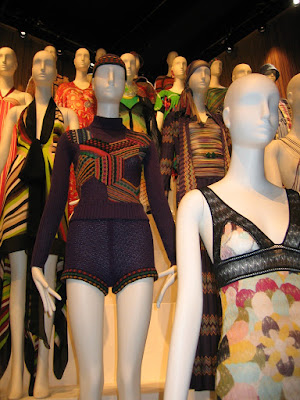 Missoni Art Colour at the Fashion and Textile Museum runs until 4 September 2016.
Posted by Black Tulip at 17:40