I've finally been to see Hats Amazing, that latest exhibition at Hat Works. The exhibition allows various seldom-seen items from the museum's collection to have their moment of glory, as every exhibit was chosen from the museum stores, by the staff. It's not just hats, but all sorts of hatting artefacts as well.

One of the first things I spotted was a sewing pattern.


Alongside it were a couple of hats from the era. Although the green one looks as though it could have been made from the pattern, it is actually by Dior.


Also in the case were some amazing combs.


The next section contained information about various hatmakers.

At the bottom was one of my favourite items in the exhibition; a scrapbook assembled by a member of the Comach family, containing newspaper cuttings of various well-known people wearing Comach hats.


Exhibits ranged from the large to the relatively small (although some would say, not small enough!). This circa 1950 painting was one of three depicting hatmaking-related jobs; the other two were 'Blocking' and 'Stitching'.


Nearby was a display of hatpins. In order to secure massive Edwardian hats, hatpins could be up to 30cm / 12" long; which made them both handy weapons if the need arose, and accidentally lethal.


There were also plenty of hats in the exhibition; from traditional felted hats . . .


This collection of hats as part of uniforms included a pith helmet with its own metal hatbox, and reels of the chequered trim used on police hats.


This item features on the exhibition poster, and is a measuring device for made-to-measure hats.


Hats Amazing continues until 19 March 2017, and is well worth a visit. 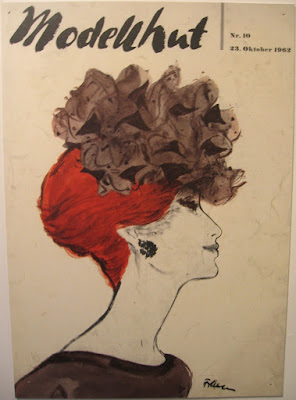