Although the challenge I’ve set myself for the Vintage Sewing Pattern Pledge this year is to make up three of my vintage patterns, I also have a lot of pattern re-issues from the Big Four in my stash. For some of them I even have fabric as well! Vogue 8789, from 1957, was one such pattern.


When I visited the Horrockses exhibition a few years ago, I was really taken with the dress on the exhibition poster, and especially its bias-cut bodice. 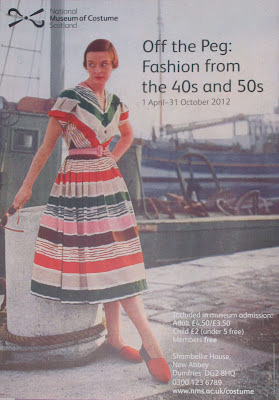 So when Vogue 8789 was reissued, I knew that I wanted to make it. I bought this perfect striped Rose and Hubble cotton in Over the Moon in Glastonbury a couple of years ago, and then did nothing with it.


Then a couple of weeks ago, having got sick of having to move the cut-out pieces every time I needed something which was underneath them (which seemed to be frequently), I decided that it was time to finally Do Something.


I didn’t use the pattern pieces to cut out the skirt, as it is just four identical rectangles of fabric. However I did hit a problem, namely; which direction to have the stripes?

The Vogue pattern illustration shows the skirt with the stripes running vertically (and as I found here, Vogue re-issues do seem to stick quite closely to the original artwork). However nearly all of the examples of Horrockses dresses that I’ve found have the skirt stripes running horizontally, including this one in an advertisement for the Liverpool department store apparently known locally as “The Bonmarsh”.


Eventually after extensive research / drooling over pictures of pretty dresses on the internet, I managed to find a couple of examples with vertical stripes, which was enough for me.


In the process I also found two images which I just had to share.

First up, in the unlikely event that I ever find some fabric with bunches of bananas printed on it, I really want to recreate this dress. Because who doesn't want a dress with a banana-encrusted bust?


Secondly, this fabulous picture of the Horrockses float in a Preston Guild procession in the 1950s, courtesy of the Harris Museum and Art Gallery.


Anyway, back to the dress. The skirt is very, very full. This picture shows the four panels sewn together (so the fabric is double thickness), and draped over Nancy, who is set to my height.


It had to be tightly gathered to fit it to the bodice.


The dress is finished off with a petersham ribbon waist stay; I suspect partly to give some structure to the bias-cut bodice, and partly to stop the weight of the skirt from stretching the bodice. It fastens with a side zip, which I hand-picked although it wasn’t really necessary as side zips don’t show much. On the other side I added a pocket, because what dress isn’t improved by the addition of a pocket?

Such a full skirt looked a bit droopy on its own, so I made a net petticoat to go under it. The same as my pink one, but a far more sensible white.

I added a final touch to my Horrockses homage. Nearly all the Horrockses dresses I have seen have a matching fabric belt with a fabric-covered buckle, so when I came across an advert for Harlequin, who offer just such a belt-making service, I decided to splash out. The service was quick and the result is just perfect, even the loop carrier matches exactly.


In true Horrockses style, I think that this will be a ‘best dress’ rather than a ‘everyday’ or even ‘work’ dress. Everything I have read about Horrockses suggests that their dresses weren’t cheap, something which my mum confirms. According to this website, the four guinea dress advertised above would cost about £118 / $172 today. However cost isn’t really the issue here; I just can’t face ironing that massive skirt on a regular basis!

So here is the end result. Unfortunately, although it was sunny the day I took the picture it was also very windy, so my attempts at Barbara Goalen-esque poise and elegance were scuppered by the need to keep my hat on, my hair from sticking to my lippy, and my skirt from blowing over my head! Oh well. 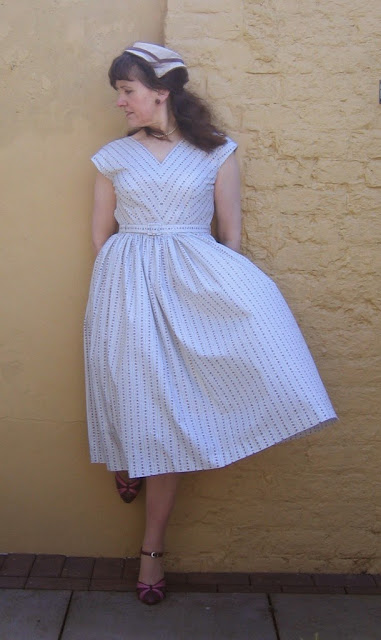