How vintage is 'vintage'?

In which I feel Very Old.

Yesterday I went to a vintage fashion fair in Liverpool. Part of the attraction was that it was held in the crypt of the Metropolitan Cathedral, which I haven’t visited for ages. It’s always interesting to have a look round there, marvel at the scale of it, and try to imagine what the completed cathedral would have looked like, had it been built.


There were some 1950s items on sale, but much of clothing was later than that, up to and including the 1980s. I’ve come across this in other vintage fairs, and I always find it slightly mind-boggling (and worrying) that something I wore the first time round now counts as ‘vintage’. There is also the awful possibility that one day I will come across one of my own creations for sale!

In some ways though I can’t complain. In the mid-1980s I made a dress from this 1948 pattern of my mum’s, which I loved. The pattern is now a candidate for a remake as part of the Vintage Sewing Pattern Pledge although I will have to, ahem, let it out a bit.


Another favourite dress of mine in the eighties was a 1950s sheath dress with a wide collar. I bought this second-hand, took a pattern from it, and wore both the original and my remake. So, given that I was wearing styles which were 30-35 years old, I suppose that it’s not unreasonable that people now want to do the same, which means clothes from the 1980s. According to Laver's Law, which defines fashions by their age, 1980s dress is now 'amusing'. Not the word which I'd use, but never mind.


It’s not just vintage fashion fairs that regard the 1980s as fair game. The Vintage Sewing Pattern Pledge allows patterns up to the 1990s. This fact, combined with recent fair visits, got me wondering. Sure enough, despite a massive (and now much regretted) clear-out in the 1990s, a check of my pattern stash reveals that I could actually meet my pledge of making three items from ‘vintage patterns’ simply by reusing patterns which I already have! Ouch. 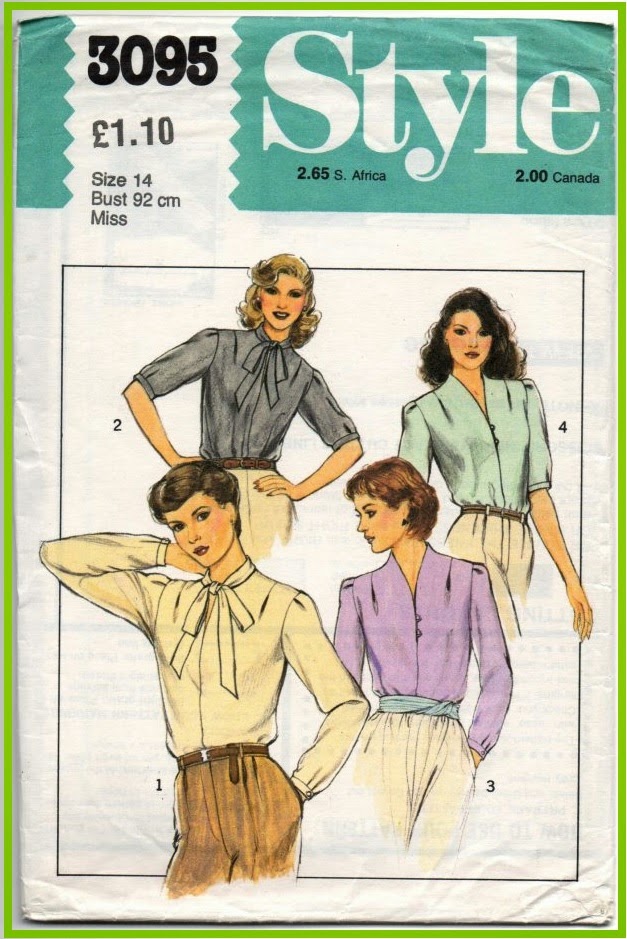 I was horrified to discover just how old this next pattern is. 1982. Horrified because I still have a top I made from it in my wardrobe - view 1. I’ve been wearing vintage without even knowing it! 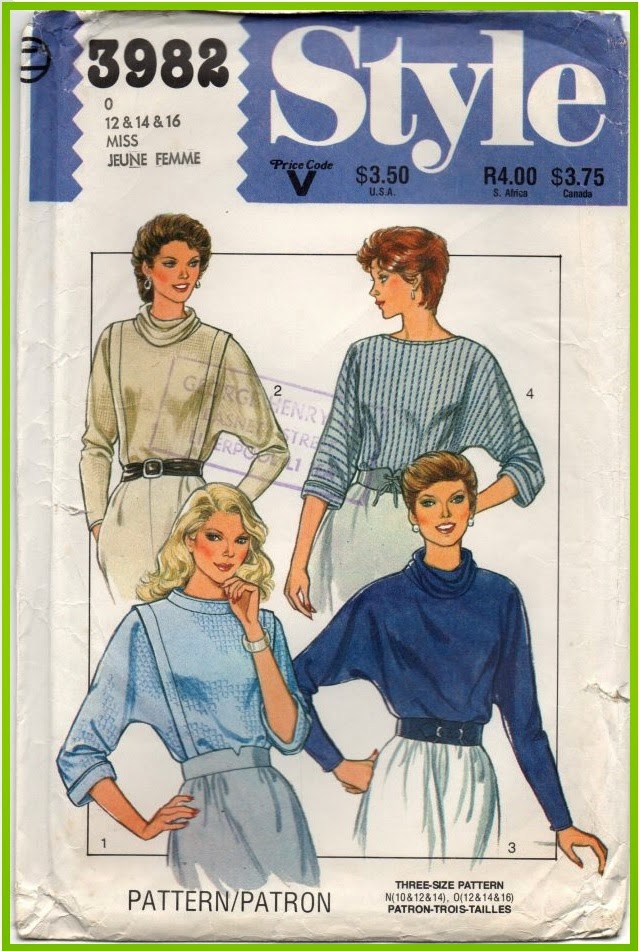 The co-hosts of the Vintage Sewing Pattern Pledge have both posted about their collections of vintage patterns (you can read them here and here), and have included, “The pattern I’ll never make, but won't get rid of”. This is definitely my equivalent. With a date of 1989, it only just sneaks in. 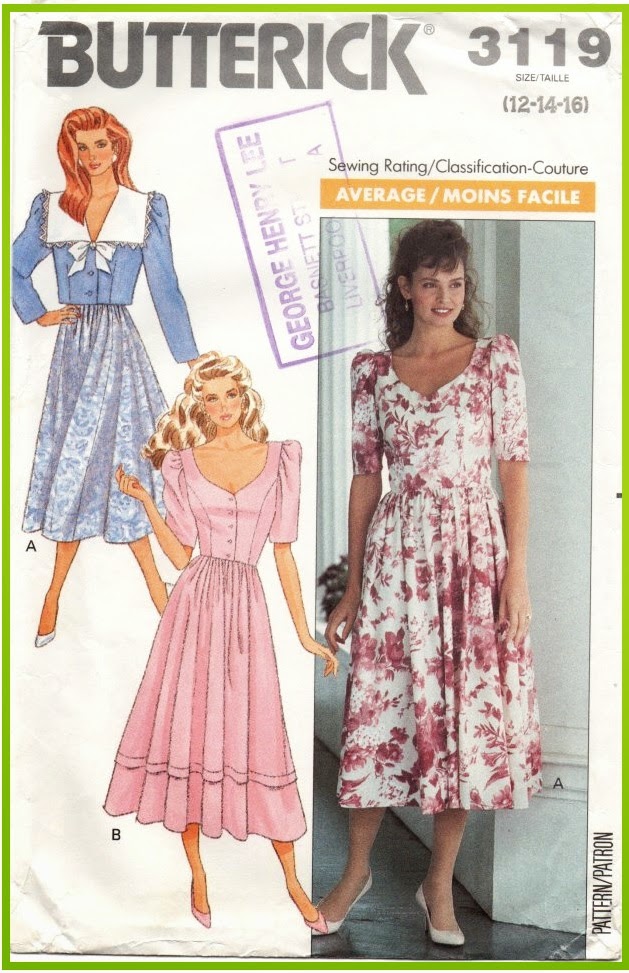 I have no idea why I kept this pattern, and it’s not something I’d ever wear now, but as it's survived this long I can’t imagine getting rid of it.

On the subject of my lost pattern stash, at a recent fair in Chester I came across a pattern which I used to own. In a fit of nostalgia, I bought it. 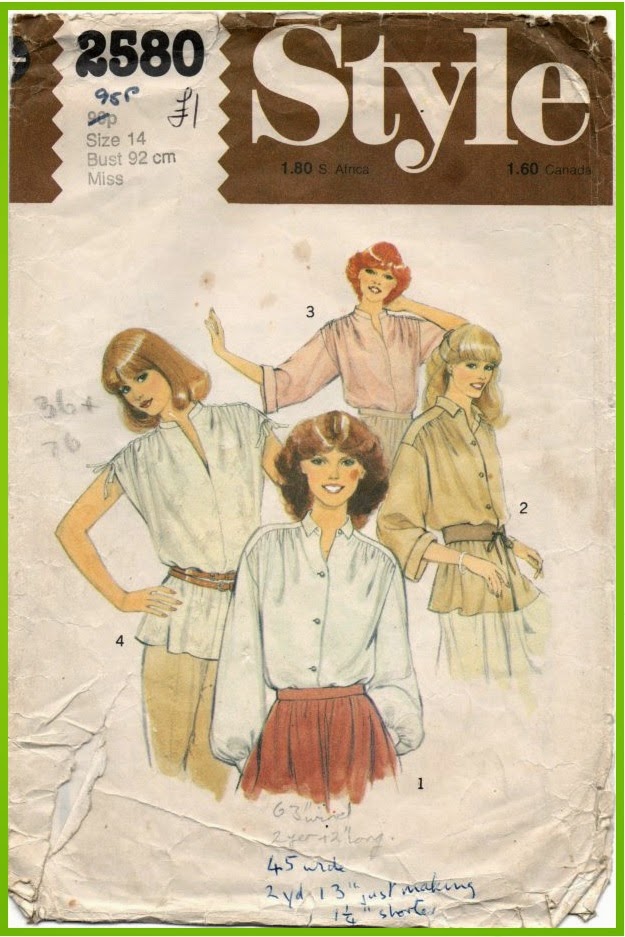 It dates from 1979. I made view 1, in a fine green cotton lawn with small white flowers. It's just as well that it was a fine fabric as the blouse contains a ridiculous amount of cloth; view 1 requires 2.6m / 2¾ yards of 115cm / 45" wide fabric. I've made dresses from less. Plus, I must have spent a phenomenal amount of time just ironing the thing.

So having bought the pattern the question was, where to file it? My vintage patterns were in one drawer, my remaining few Style patterns in another. Which was it to be? In the end it went in the Style drawer, as I convinced myself that it wasn't really vintage. Whatever other people might think!
Posted by Black Tulip at 20:14