As I mentioned in last week's post about our Venice trip, one day Mum and I visited some of the other islands in the lagoon. As we have both made bobbin lace in the past, of course we had to visit the lace museum on Burano.

Lacemaking in Venice can be traced back to the fifteenth century, when lace first started to be mentioned in sumptuary laws and dowry inventories. Then in the sixteenth century large numbers of pattern books for lace design were printed in Venice, far more than in other European cities. The majority of these were for needle lace rather than bobbin lace.

At this time, lace began to appear on both men's and women's clothing. For Venetian women this included the "bavaro", a type of collar, made entirely of lace, and lace used to highlight the shoulder holes of oversleeves.


Originally seen as a suitable pastime for aristocratic ladies, as demand for the lace grew many of the religious and charitable institutions in the city opened workshops. These had the double benefit of creating income, and providing an occupation for the resident orphans, spinsters etc. When these workshops could not keep up with demand, lace production was extended to some of the other islands in the lagoon.

By the late seventeenth century, Venetian lace had developed from its original, grid-like form into something more flowing and three-dimensional.

The simpler fashions of the late eighteenth and early nineteenth centuries meant that demand for lace fell. When it later came back into fashion, hand-made lace struggled to compete against cheaper, mechanically made laces.

The end of the nineteenth century saw a revival of interest in traditional crafts across Europe; for example, the Arts and Crafts movement in Britain. In Venice, this led to a revival in teaching lacemaking and the foundation of new lace schools.


By the 1950s the Venetian lace industry was again in decline. However efforts are being made to keep the traditions alive and pass the skills on to a new generation. As well as having a huge collection of examples of Venetian lace from the fifteenth to the twentieth centuries, the museum has an excellent step-by-step display of how the lace is made, in Italian and English. Hopefully my photographs are clear enough to read. 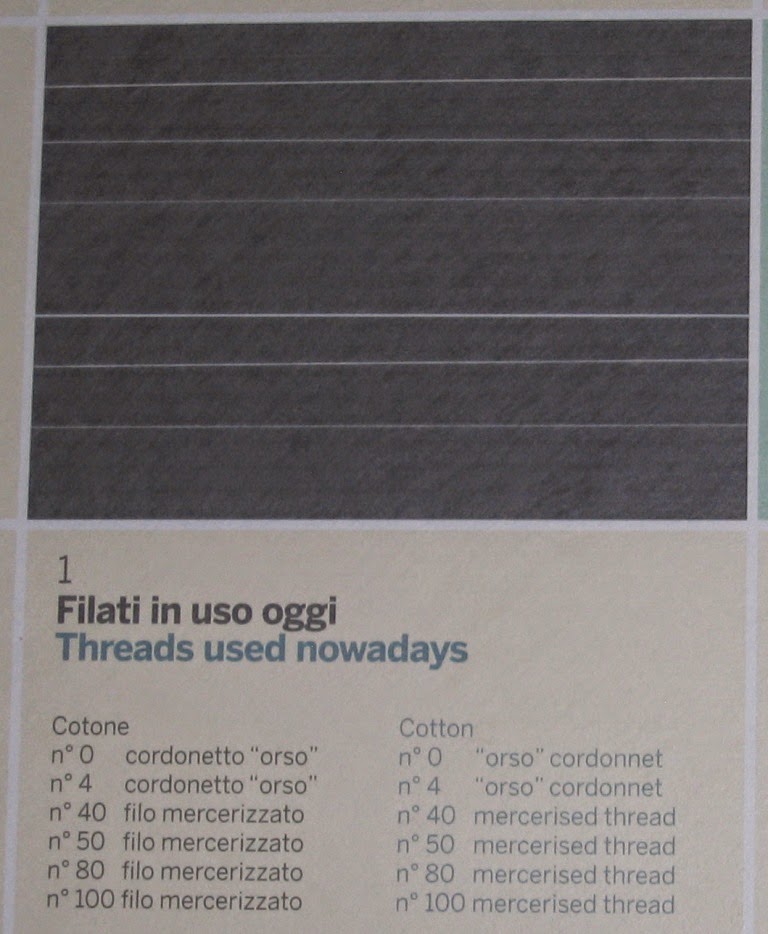 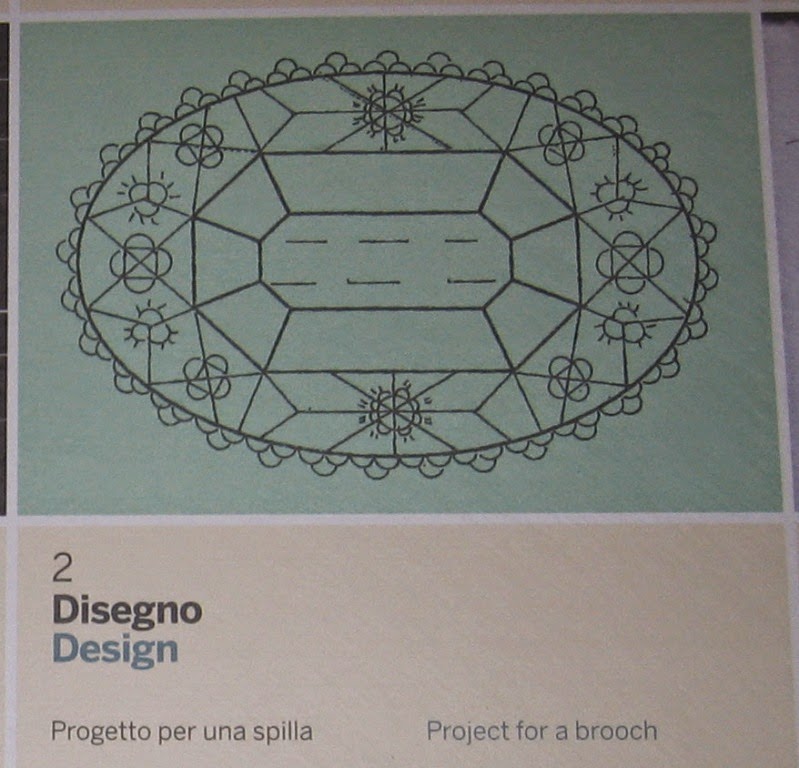 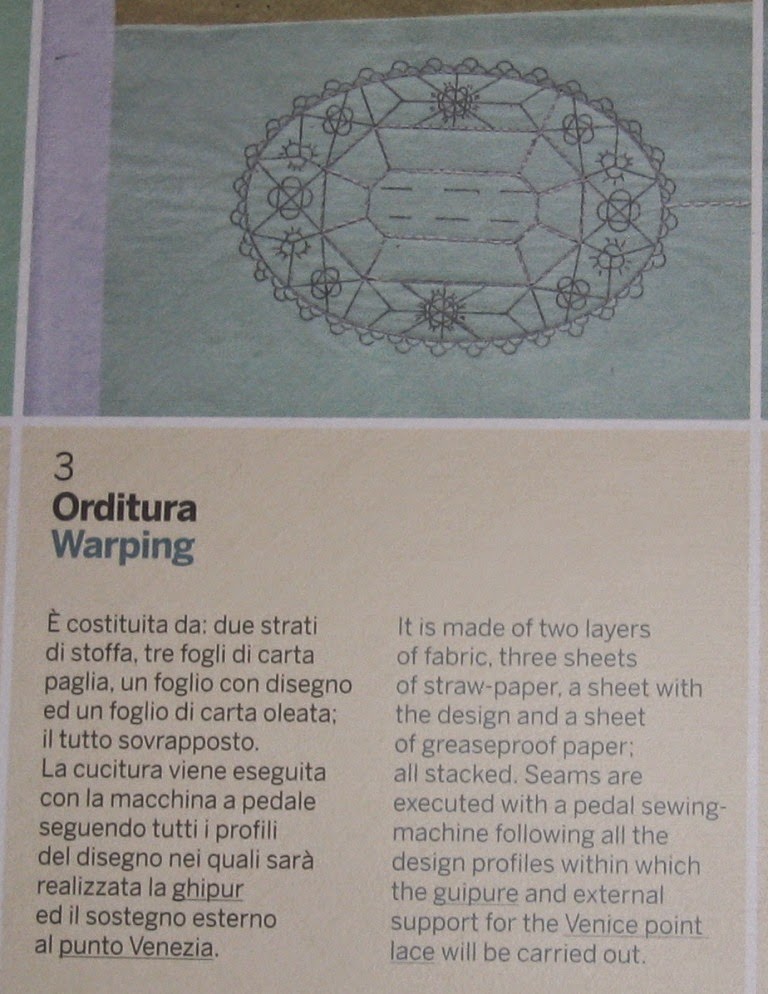 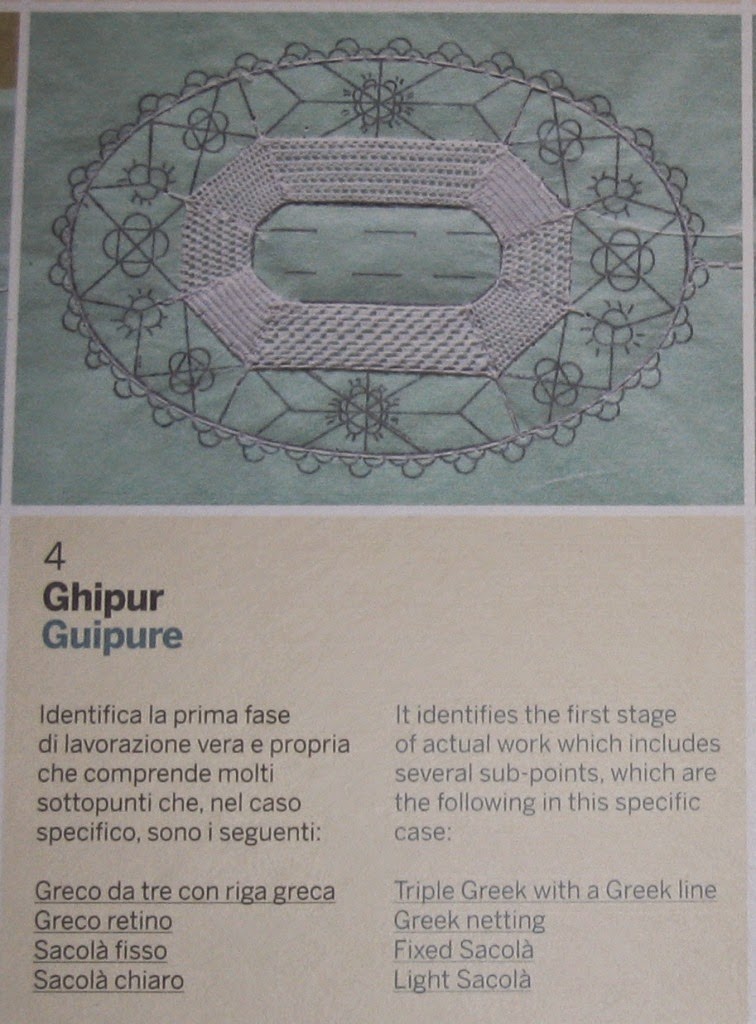 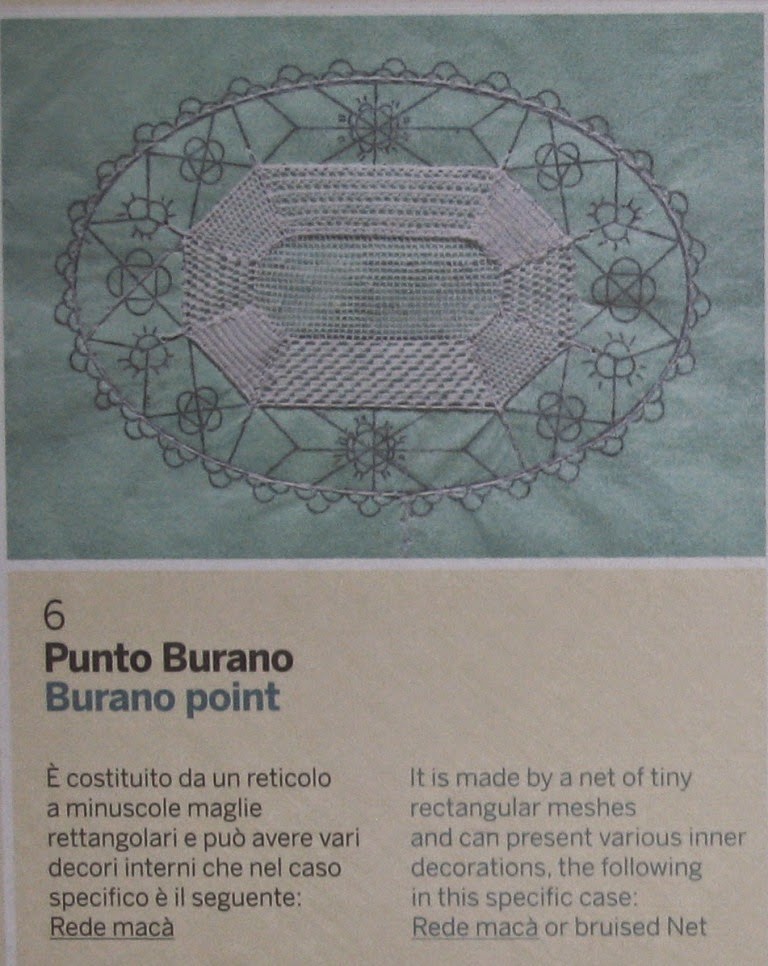 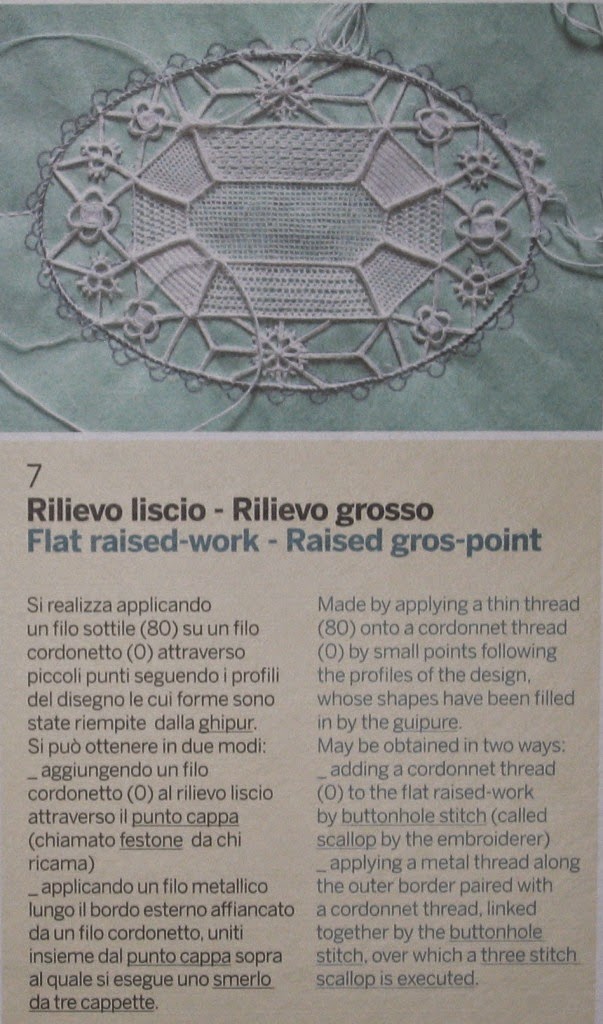 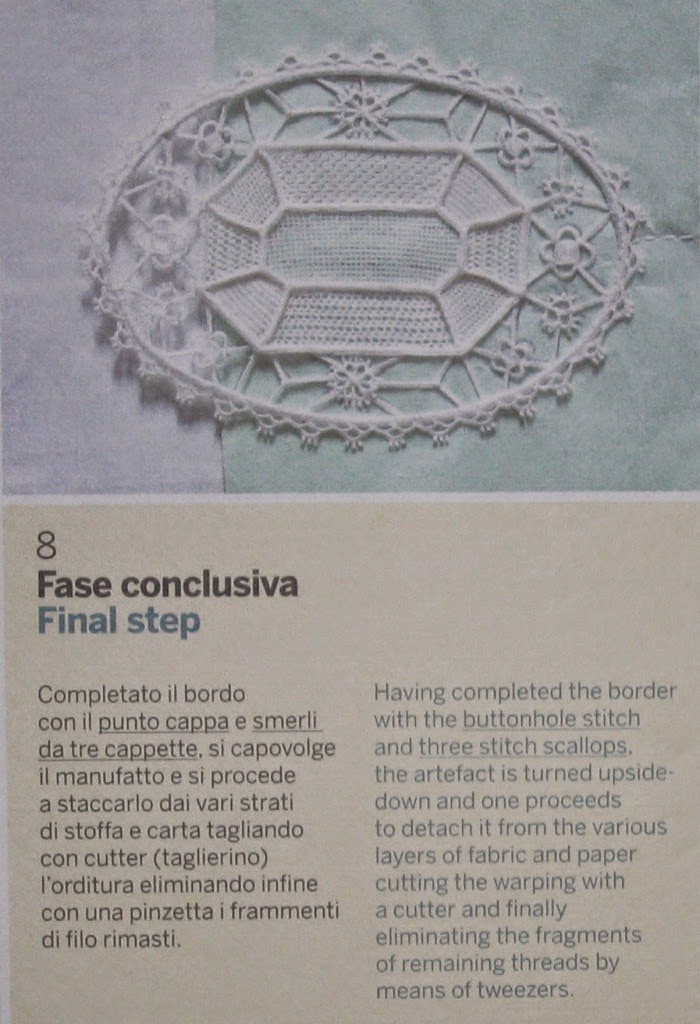 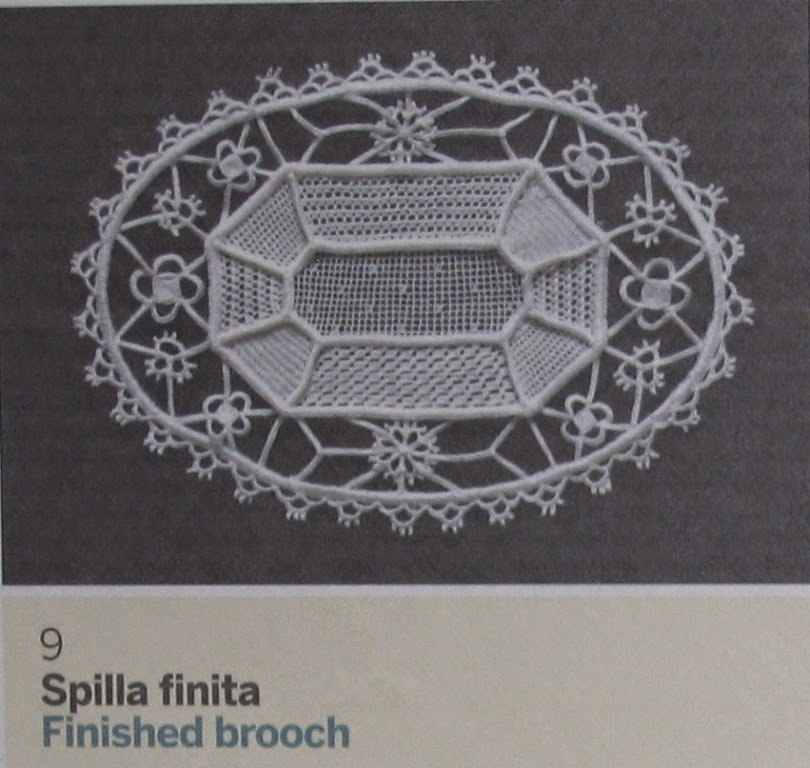 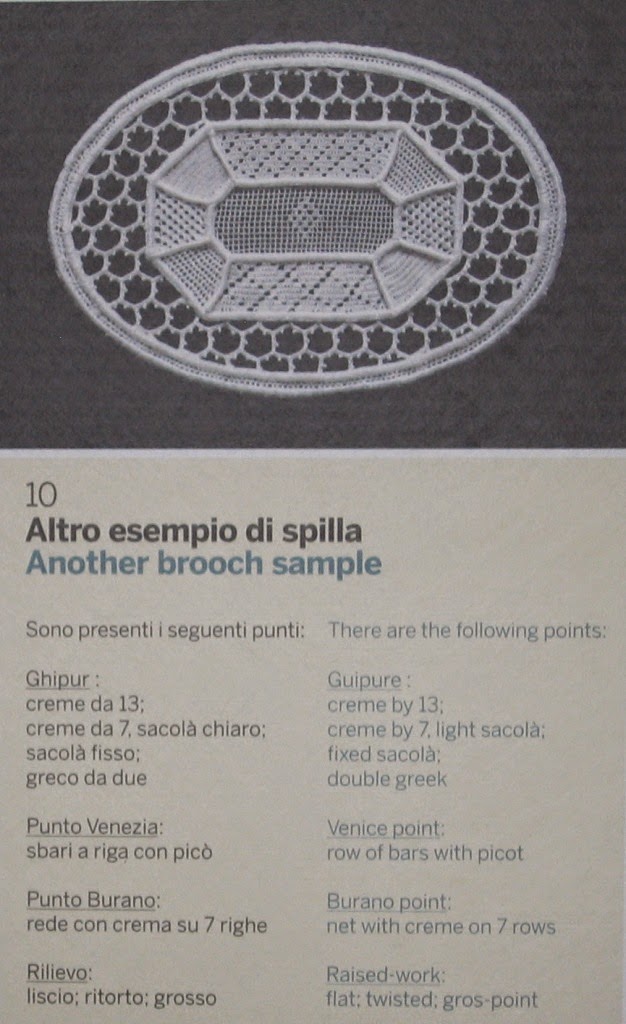 There was also a lady making lace in the museum. Sadly my Italian was nowhere near good enough to talk to her, but she was happy for us to watch her working, and to take pictures. 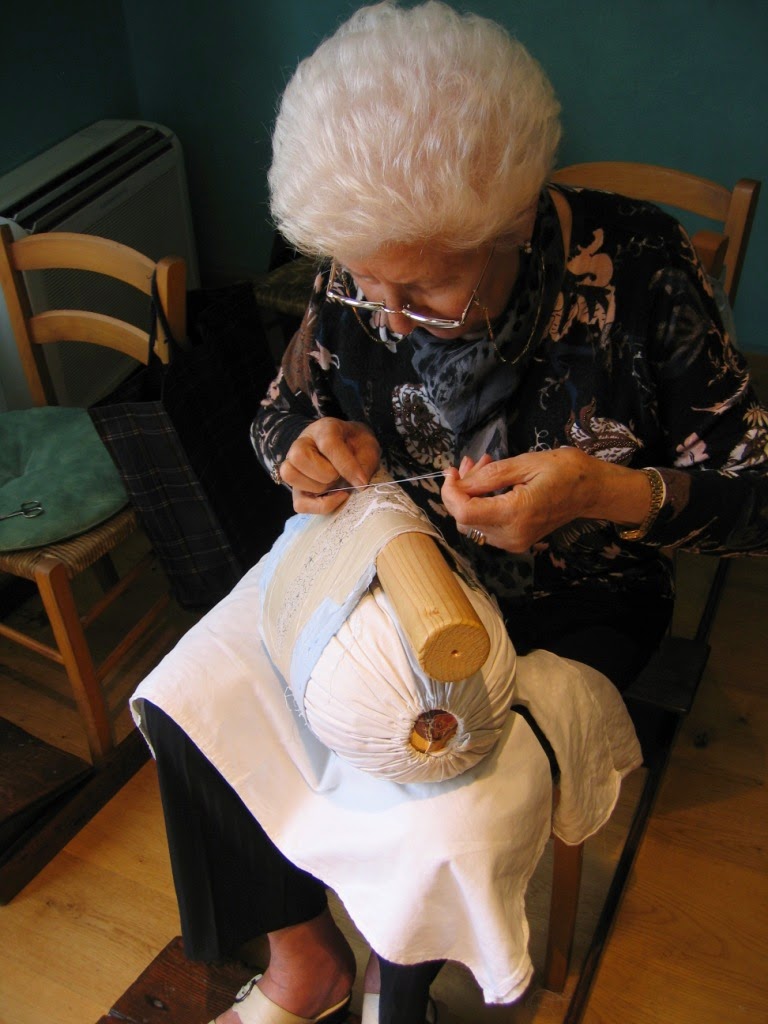 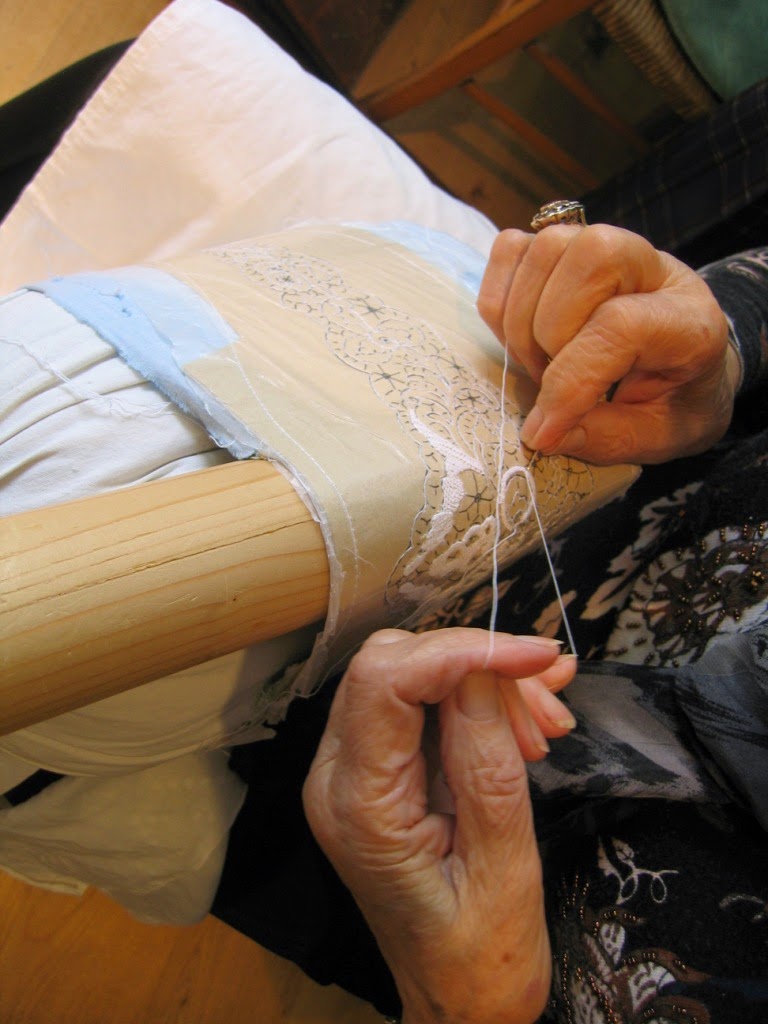 The length of wood was there to curve the work so that it was easier to get the needle in and out of the stitches. Sometimes she would pull it partway out so that she could press the design against the end of the pole, and work the stitches against the sharp edge. 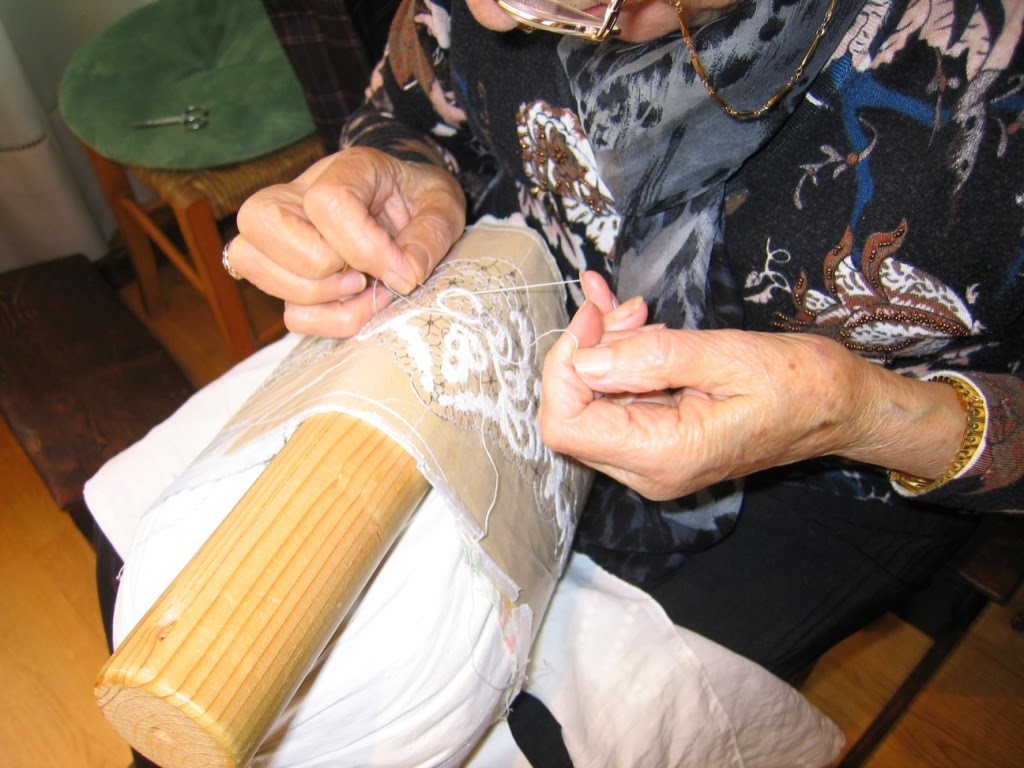 What isn't obvious from the photographs is that she was working with a very long thread. Mum and I agreed that we would be tangled up in knots in next to no time if we tried it!

Later on another lacemaker arrived, of a similar age. There seem to be very few younger lacemakers on Burano, although this may just be that they are too busy on a weekday to demonstrate their skills in the museum. I really hope that just as a number of British crafts seemed destined to die out in the 1950s and 1960s but were then revived, there is enough interest in this beautiful form of lacemaking to keep it alive.
Posted by Black Tulip at 22:45