As part of my slow, long-running, and probably doomed attempt to get sewing space into some sort of order, I'm going through my stash. Well, the fabrics section at least - let's not get too carried away! While doing this, I recently came across a bag of fabric pieces which have been left over from various dressmaking projects. Some of the pieces were long but not especially wide, and not really big enough to do much with. They were however perfect for making padded hangers for some of my dresses.

I used wooden hangers as they provide a degree of thickness to the finished hanger. You could use wire hangers and squeeze the top and bottom together, but they would need a lot more padding.

For my first attempt I used 1.5cm / ⅝" thick wadding left over from another project. Some online tutorials suggest using two or even four layers of wadding, but I want my hangers to provide support without taking up lots of space in my wardrobe, so a single layer was enough. Some of the same tutorials also suggest, whisper it, gluing the wadding to the hanger! The horror! I used a needle and thread instead.

To start off, I cut a piece of wadding slightly longer than the top curve of the hanger, and slightly wider that its circumference. 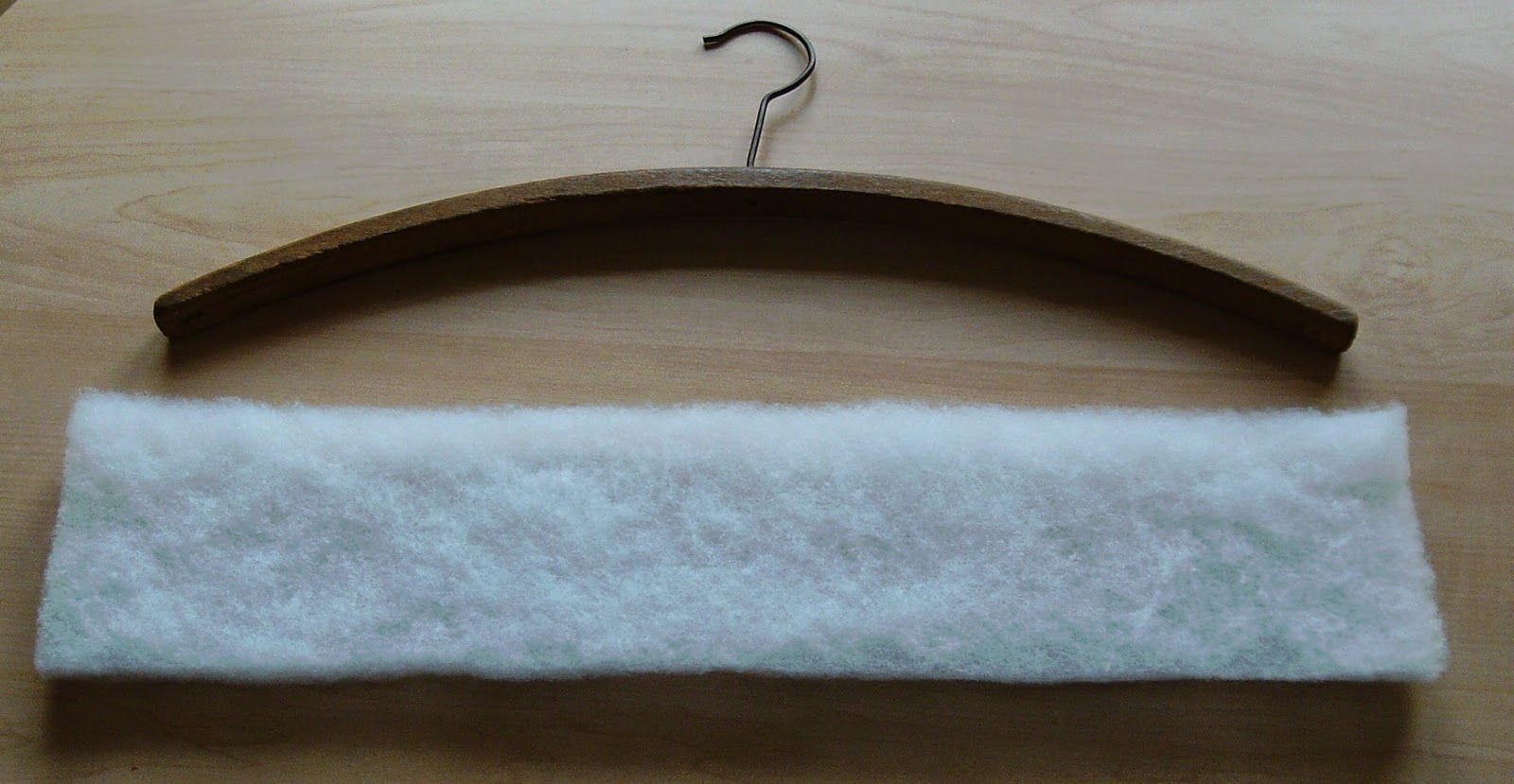 Then I folded the wadding round the hanger in the centre, and secured it with a couple of stitches around the metal hook. 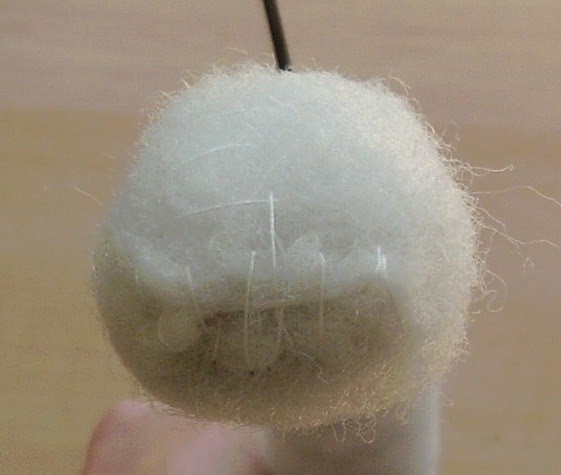 Then I cut a piece of fabric slightly longer than the top curve of the padded hanger, and slightly wider that its new circumference. I turned under a narrow hem along one long edge, and finger pressed it.

The easiest way to attach the fabric would be to fold it over the hanger from the bottom, and sew the edges together along the top. I wanted the top of the hanger to be smooth however, so I used my awl to make a hole in the fabric, and pushed the metal hook through it.

Then I wrapped the fabric round the wadding, with the folded edge over the raw edge, and overcast the edges together. I started from the centre of the hanger and worked outwards for each side, and this time my stitches were much smaller and neater. The ends I folded over like wrapping a parcel, and secured them with a few small stitches. 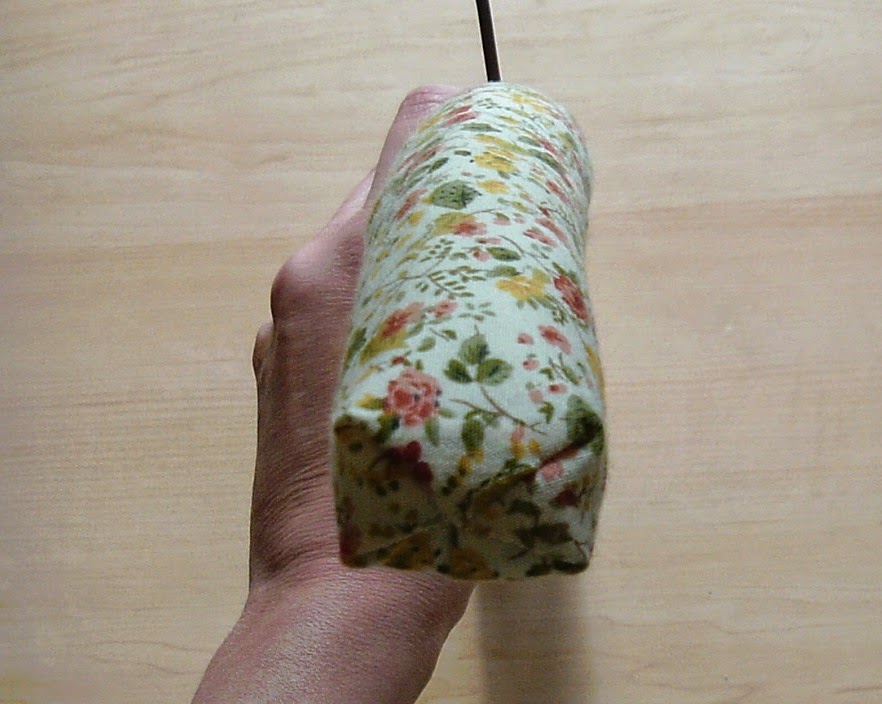 And this is the finished hanger.

I had also found some scraps of domette (curtain interlining) which were left over from making a new cover for my ironing board, so I decided to experiment with padding a hanger with this instead of wadding. As it was much thinner that the wadding, I used three layers. The first layer was made in two halves, one for each side of the hanger, and stitched together in the middle. 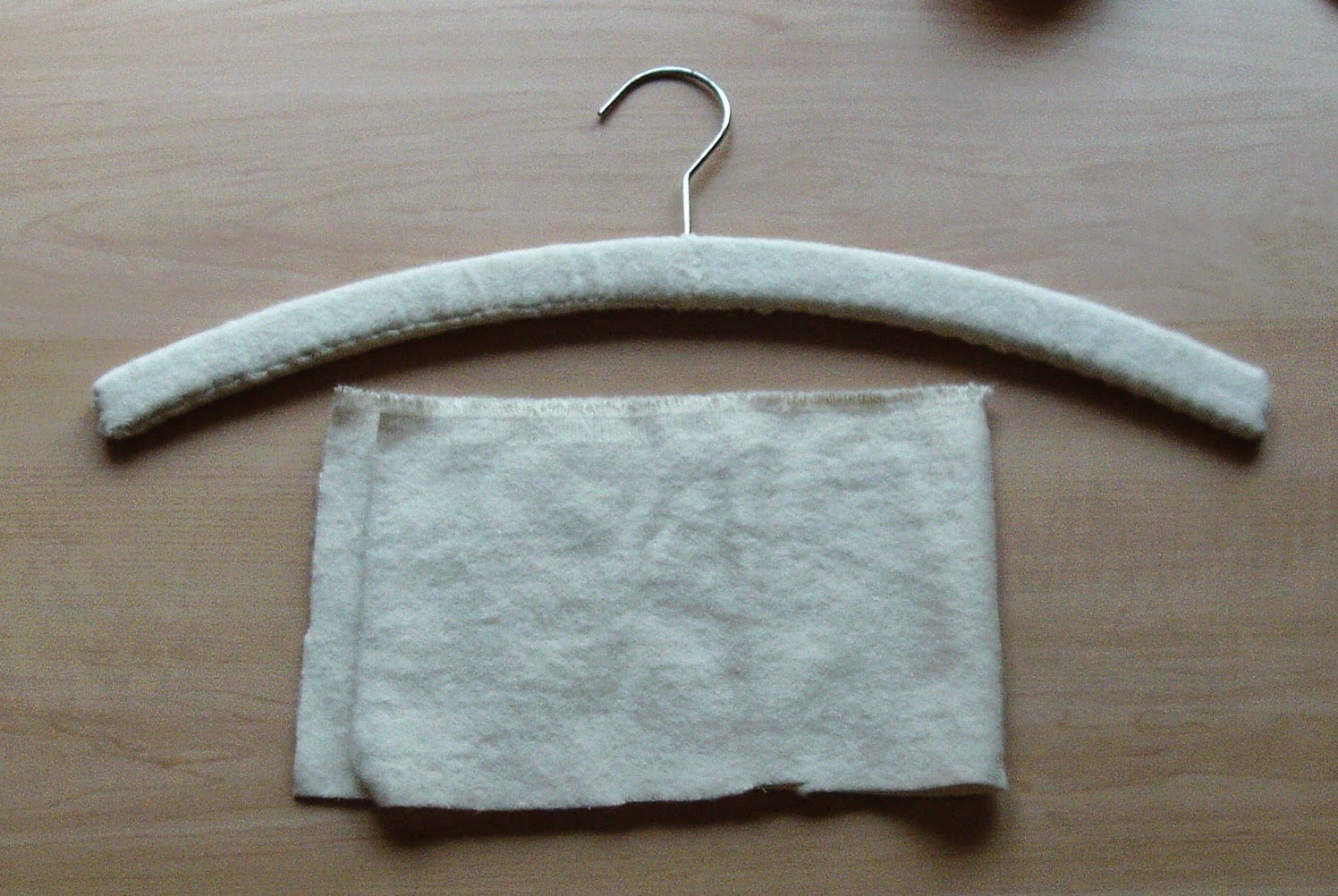 The second and third layers were made from the rectangle of domette in the photograph above. I split it down the centre about ¾ of the way down the piece, then wrapped it round the hanger. This is it with one side wrapped.

I should add that there was nothing remotely scientific about all of this, I was just making it up as I went along!

The wadding method produced a much fatter hanger. 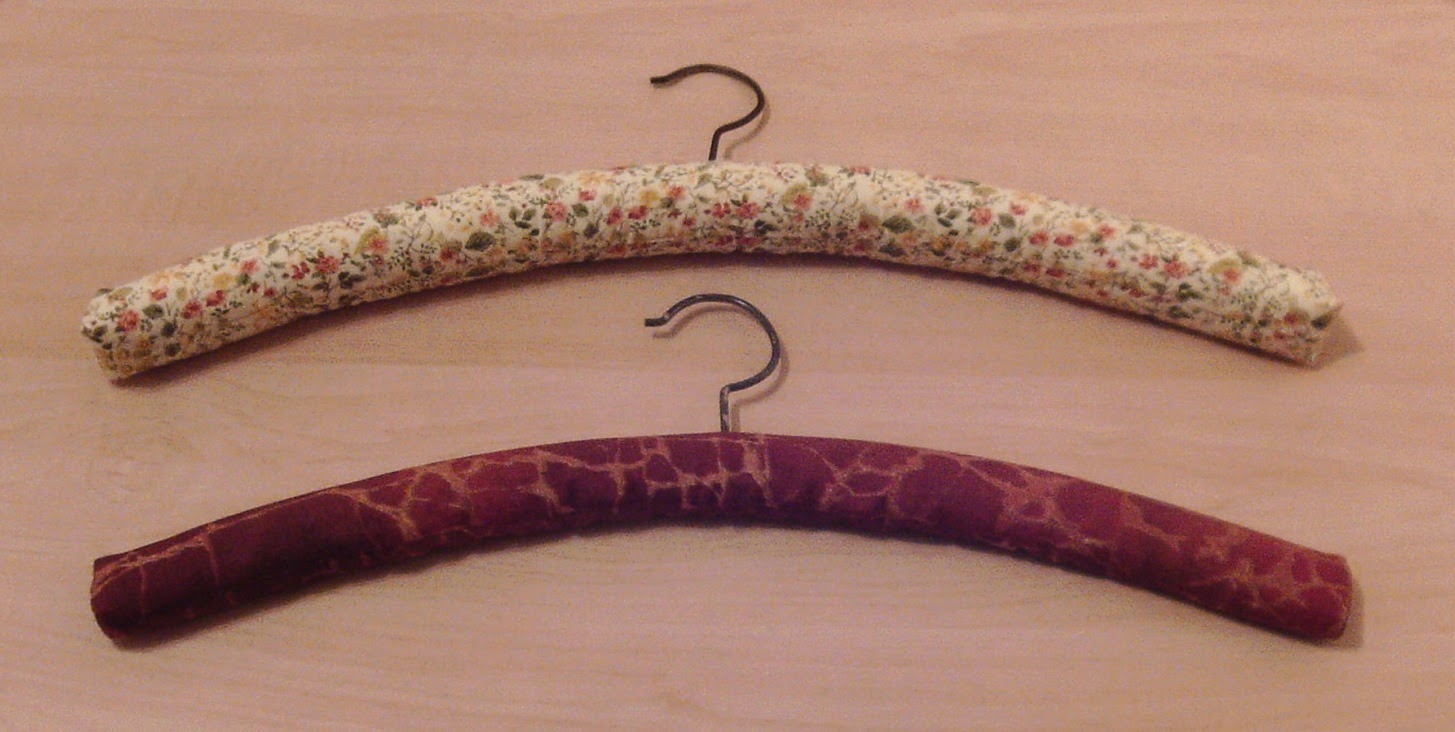 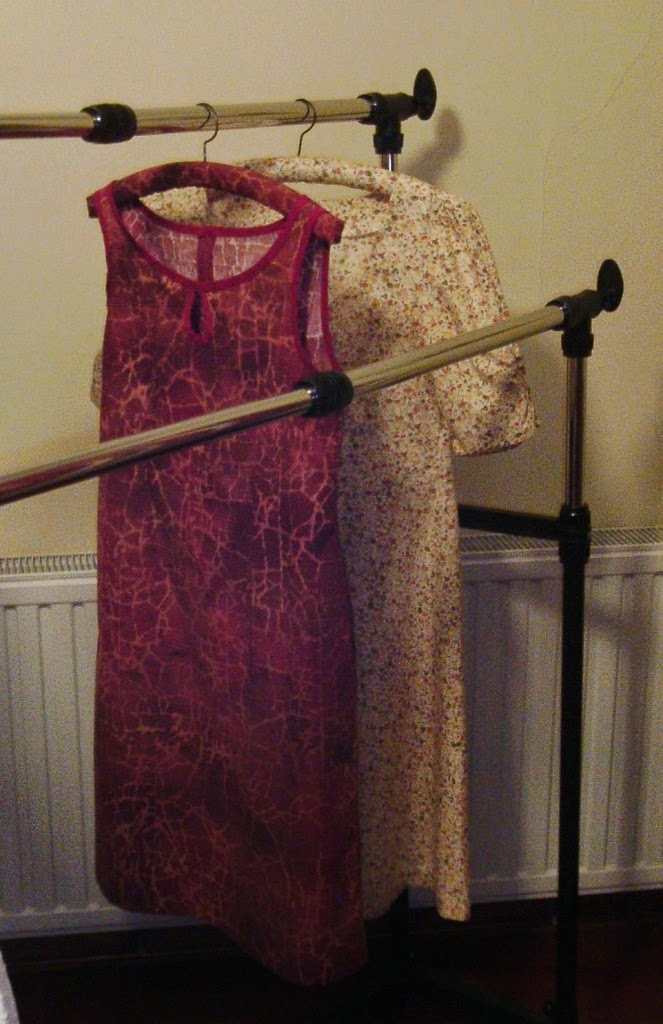 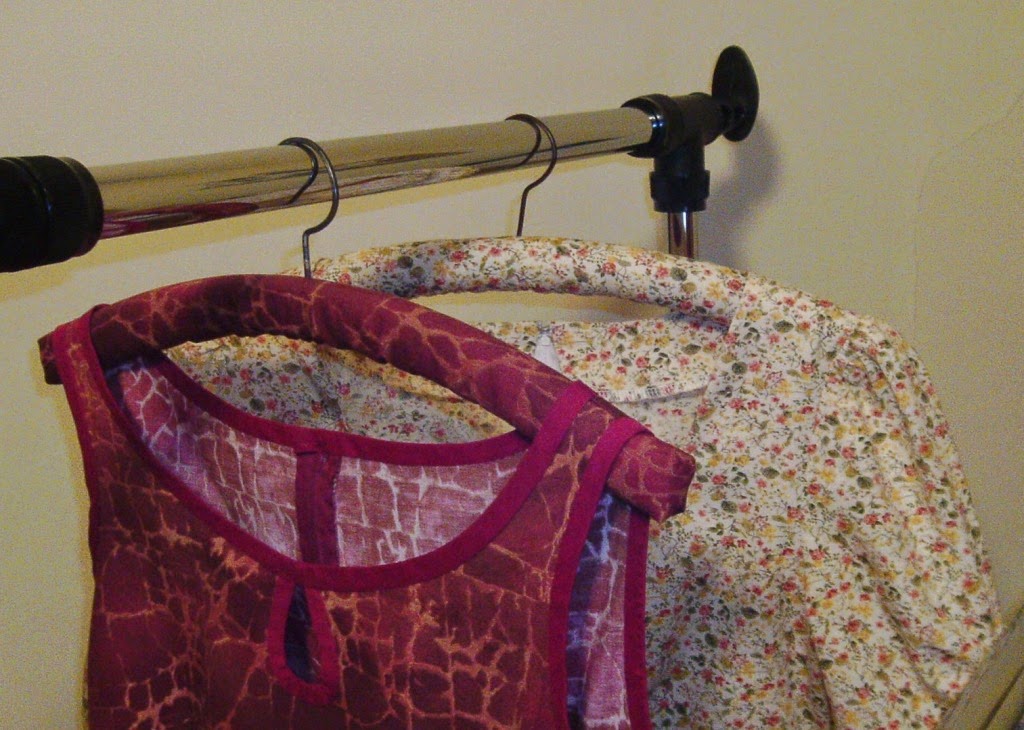 I may well trim my hangers with any suitable scraps of lace or ribbon when I get onto the trimmings section of the Grand Stash Re-order, but for now they work perfectly well as they are.

This still leaves some quite large pieces of cotton unused. I do have a plan for some of these, but that's for a future post.
Posted by Black Tulip at 23:02