(Or, why the costume I’m actually making is very different from the costume which I thought I was going to make.)

Back in May it all seemed so simple. I was going to make a new costume for the Medieval Fair I would be attending with Ya Raqs in the summer. I pretty much knew what I was going to make and shopped accordingly: big harem pants, a white cotton blouse with long sleeves split from the elbow, a lavishly trimmed coat which fitted under the bust and also had long split sleeves, and a wide sash.

I had these sort of images in mind, even though they date from a far later period. Somehow I blithely assumed that because it was 'traditional' dress it would have remained unchanged for centuries!

Well unsurprisingly, that’s not quite how it’s turning out.

The first thing to go was the wide trim. This is made from a 5cm / 2” wide braid with alternating circular and flower motifs, woven in blue and red, and then heavily decorated with sequins, beads and sew-on stones. It’s pretty, and it prompted the colour scheme of the entire costume, but in the cold light of day, even with no research whatsoever I could tell that it’s not remotely appropriate. So into the stash it goes.


Then I went online and did some research on Persian and Turkish costume for the period. It started promisingly when I found this. The sleeves and neckline were different, but I could live with that.


However, even though the image was described as "15th century Turkish women’s costume", it was obviously not a contemporary 15th century image. So rather than just dive straight in, it was back to the research.

As I explained last Sunday, big puffy super-bloomers turned out to be a later element of Turkish costume. As it transpired, so were split sleeves, the neckline cut under the bust, and wide sashes. Instead the entari, the garment worn over the shirt, had a round  or 'V' neckline and usually short, wide sleeves with a curved edge for the bend in the arm. It was often fastened with frogging. The belt was long, but narrow.

This site, which was the source of my shalwar pattern, has lots of useful information information on Ottoman costume. Especially helpful for me are several images depicting dancers. 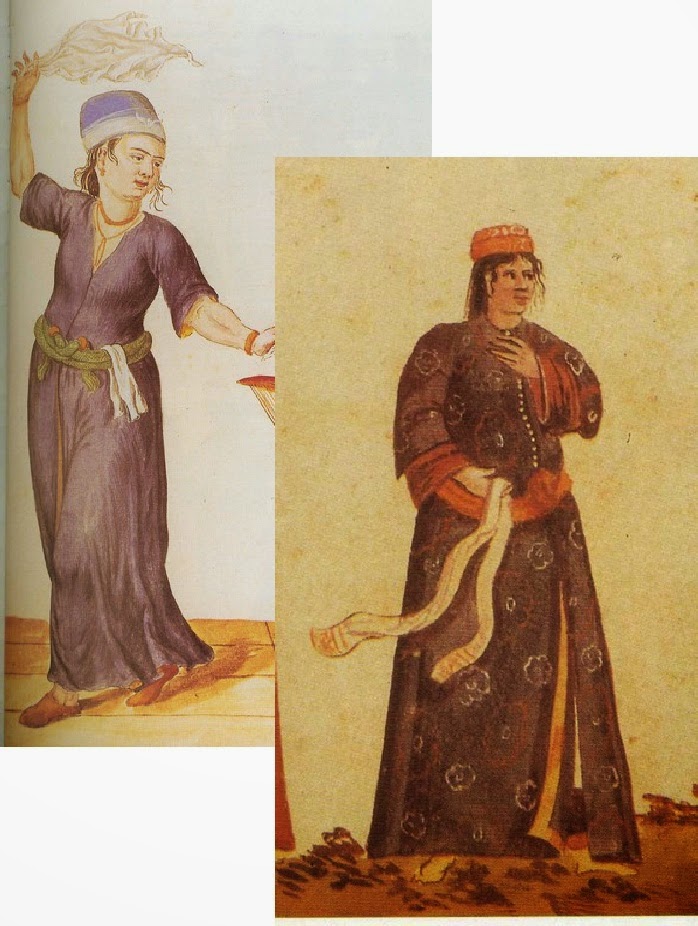 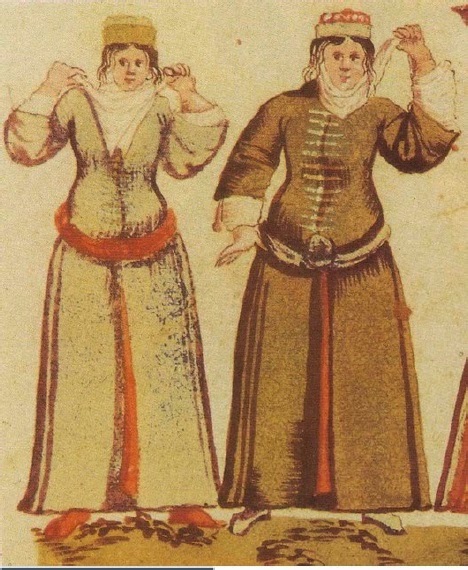 I love the fact that the bottom two dancers appear to be doing something cheeky/coy with their face veils, a move which is still used (with varying degrees of cheesiness) today!

Having decided on the basic design, it was on to fabric choices. The gomlek, the long shift or undershirt, came to below the knees and was always made of a very sheer fabric. I'm going to use a fine muslin.

The original plan for the outer layer was to use the same fabric as I used for the trousers, but in a different colour, and lined with a third colour. I soon realized that it's far too soft and drapey to hang properly, or to support the weight of the decoration, so I planned to interline it with cotton. However, the more research I did and the more I thought about it, it seemed silly to put so much work into something which would be so inherently wrong. Back to the fabric shop I went. I wanted to keep it plain, and found a linen/rayon mix in a suitable colour. Yes it should really be pure linen, but I will be sitting on floor cushions for two days, and a linen entari would look as though I'd slept in it after an hour or so. The lining fabric also ended up being replaced, with cotton. The very boring photo below shows the original coat and lining fabrics at the top, and their replacements below. Shame, because I really liked the colour of the original coat fabric. Still, I'm sure I'll find a use for it.


The frogging is going to be more ornate than is entirely appropriate, but there are some things which I can't quite give up! It started off with just the maroon and gold cords and the leaf motifs, but then I remembered that I had some dark red soutache which had migrated from my friend Kebi's mother-in-law's stash to mine, and it's a perfect match.


Now all I need is for the Time Fairy to pop round with a few extra days!
Posted by Black Tulip at 21:59