The Politics of Fashion

Gah! My entry for the Politics of Fashion challenge still isn’t finished! However as a) the next challenge, Shape and Support, is due on Tuesday and b) I need to concentrate on dance costume projects for a few weeks so will have to add this challenge to the PHD pile, I thought I’d post about it now.

There’s also the small matter that the lovely Gina of Beauty From Ashes very kindly nominated me for a Liebster Award some weeks ago, and I haven’t had time to blog about that either. I will write it up soon, I promise!

Anyway, back to the challenge. The requirement was to:
“Craft something that demonstrates the interactions between dress and political history.”

Now lots of different things inspire me to create. Some are more or less direct recreations of an item, while for others the inspiration takes a less obvious route. Sometimes the response is immediate, and other times the inspiration can rattle round in my head for a while before I decide how to use it. My contribution to this challenge has rattled around for longer than most: it is inspired by an exhibition I saw almost 31 years ago, which must be some sort of record!

The exhibition formed part of the Edinburgh Festival in summer 1983, and was called “Vienna 1900”. It was about the Vienna Secession; the breakaway art movement formed in 1897 by a number of Austrian artists, who objected to what they saw as the conservative attitudes of the Austrian art establishment. Six years later two of the Secession artists, Koloman Moser and Josef Hoffmann, founded the Wiener Werkstätte (Vienna Workshops) with the goal of reforming the applied arts.


The idea of an upstart new movement rebelling against the narrow ideals of a long-established empire (in this case the Hapsbergs) stuck in my mind, but I never really pursued it. Then when browsing on Pinterest (again) for something else, I found this.


The Museum of Applied Arts in Vienna holds the photographic archive of Wiener Werkstätte, including a number of designs by Eduard Josef Wimmer-Wisgrill. He had studied under Josef Hoffmann and Koloman Moser, and joined the Wiener Werkstätte in 1907, where he served as first artistic director of the fashion department. As well as photographs of dresses on mannequins, the archive contains a number of drawings, plus photographs of the dresses being worn. These show that the clothes were designed to be worn without corsets. 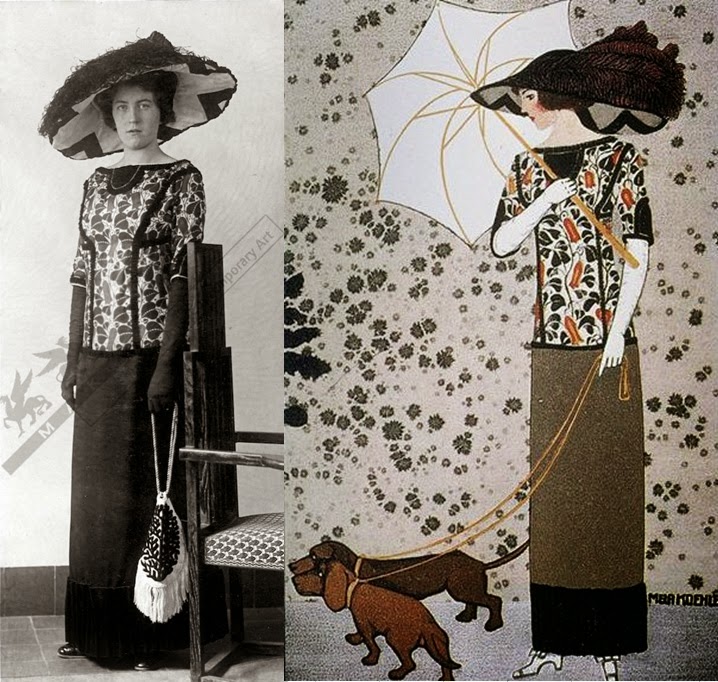 I loved these three dresses, with their Klimt-like decoration.


However, although I suffer from a bad case of DATDATOMP syndrome (Deluded About The Do-ability And Timescales Of Major Projects), even I could tell that recreating one of these would be a ridiculously large undertaking.

Then I found this 1911 dress, which seemed much simpler (deceptively so, as it turns out). A high-waisted dress in silk, velvet and organza, with the fabric roses which Wimmer-Wisgrill seems to have used a lot.


I considered using a regency dress pattern such as the Sense and Sensibility one, but decided that it would be easier just to make my own from scratch. The skirt was just two rectangular panels. For the bodice I used my basic bodice block, raised the waistline, moved the darts down to the bottom of the bodice and gathered along the bottom to fit. (There was a slight hiccup when I didn’t enlarge the neckline from the original jewel neckline on the front-opening block, and tried to pull the toile over my head, but we don’t talk about that!)


It is apparent from the photograph that the organza panels are attached to the velvet skirt all the way round, and do not hang free. The edges are covered with braid. I had hoped to be able to machine sew the braid in place, but sadly this didn’t work at all, so hand sewing it was. I cut each skirt piece larger than I needed, pinned them and the braid into place, and then sewed round the inner edge of the braid. Then I cut the organza to just inside the braid, and sewed the outer edge down.

The bodice was a bit more complicated. On the photograph there doesn’t seem to be a join between the organza on the body section and the organza on the sleeve. Because the section where there should be a seam is quite small, I decided that I could cut the organza bodice front and sleeves in one piece, and only have a seam joining the back to the sleeve.


Because the neckline is so wide, and I was using a slightly stretchy and totally non-period velvet, I added a facing of a firm cotton to keep the neckline in place.


Actually getting the organza and velvet to lie flat together took several re-dos, and is a large part of why the project is taking so long. However the actual dress is done now, and 'all' that remains is to attach the belt, make the last of the roses, attach the roses and the leaves, and sew on hooks and eyes for the side fastening. That will have to wait, probably for a couple of months now, but I will post pictures of the finished dress. For now, here is progress so far.

The small print:
The Challenge: The Politics of Fashion
Fabric: Velvet, organza and satin for the roses and leaves – all synthetic
Pattern: My own
Year: 1911
Notions: Braid for trim, hooks and eyes for fasten
How historically accurate is it? It is based on an actual dress of 1911, but the man-made fabrics let it down, so I'd say 50%
Hours to complete: A lot, and not yet finished
First worn: Not yet
Total cost: Velvet £11.49, organza £4.40, braid £3.60, satin remnants £5.12 (with a lot left) everything else from stash, so £24.61
How politics relate to this item: The dress is linked to the Vienna Secession, which was a movement created in protest at the restrictions on art in the Austro-Hungarian empire