This all began with Vogue 8686. I was, eventually, very happy with the fit, but it took a number of attempts to get it right. Then when I came to photograph the finished dress on the dressform, it looked dreadful. The skirt stuck out at odd angles at the sides, and also managed to droop at the same time. I managed to persuade it to drape more-or-less reasonably for the photographs, but it’s still obvious here that all is not quite right.


The basic problem is that I’m not the same shape as my modern, rigid dressform. I wish that I was, but it isn’t going to happen. I’m short-waisted, so the waist on any dress I make will be higher than the waist on the form. Plus I have a swayback, and high jutting hips. I need a dressform that reflects my shape.

There are various ways of achieving this. The most common one is the ‘duct tape dummy’ method. This involves donning an old T-shirt, and getting a friend to encase you in three layers of duct tape. The T-shirt/duct tape layer is then carefully cut up the centre back and centre front in order to release you (apparently it can get quite warm in there), the two sides are stuck back together with more tape, and the form is then stuffed. Threads magazine has a couple of examples of how to do this here.

One problem with a duct tape dummy is that it is difficult pin fabric to it, the way you can with a modern dress form. One way to get round this is to make a foam form. This is a bit more complicated than the duct tape method, click here for more details.

I’ve been lucky enough however to inherit my Mum’s dressform; a 1950s ‘Adjustoform’ which I hope will solve my fitting problems. It made a brief appearance in last week's post, when I used it to work out the collar shape of my CC41 dress. The form is made from lengths of wire covered in pale blue plastic, and consists of two torso-shaped halves which fasten together at the front and back with press studs on small tabs.


Despite looking like some sort of torture device, it is actually a really clever idea. The vertical wires are straight, and the horizontal wires are wavy, so they can be stretched or compressed. You put the two pieces on, fasten them together, and then get someone to squeeze the wire to your shape. Then you unfasten the form, take it off like a coat, and snap it back together again.

The flexibility of the wire means that it can easily accommodate something like a short waist. Plus, it can be altered for a different body shape such as wearing a corset.

Unlike my modern form, which has push-in metal legs which fall out at the least provocation, this has a lovely wooden base with screw-in legs.


Sadly/fortunately, depending on your point of view, there are no pictures of Mum fitting the form for me. I was in no position to take photographs, and anyway both of us were laughing too much to hold a camera steady! The end result may not be pretty, but it is accurate.

The form came with a knitted cover, which provides something to pin into.


I have also got the original box, complete with the endorsement of the British Good Housekeeping Institute. . . 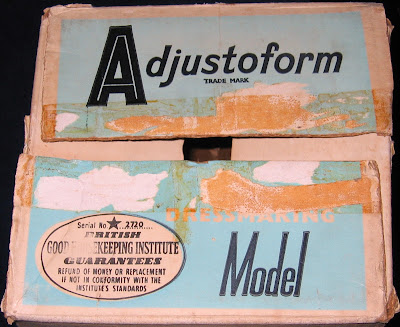 
. . . and a rather improbable illustration.


On the basis that a dressform needs a name (especially if it’s your twin self), I have christened her ‘Nancy’. Mostly, after my Granny T, but also with a nod to Nancy Bradfield, whose Costume in Detail first introduced me to historical costuming.
Posted by Black Tulip at 23:50

Email ThisBlogThis!Share to TwitterShare to FacebookShare to Pinterest
Labels: 1950s, tools and equipment