Over the years, Mr Tulip has become used to my ability to sniff out anything fabric/costume/sewing related anywhere we go. So it came as no surprise to him when, amid the myriad posters for various events which appear all over Venice, I spotted this.


As you may just be able to see from the dates, the photograph is actually from two years ago, but somehow I haven’t got round to posting about it until now.

Despite many previous trips to Venice, until then I hadn’t realised that the city had a museum of fabrics and costumes; very remiss of me. So, one day we set off to find the Palazzo Mocenigo (not entirely straightforward, given Venice’s address system). Once we’d found the place, Mr Tulip left me to it, and went for a stroll.

When I walked into the main room of the palazzo, what I saw just took my breath away: dresses everywhere, not in glass cases, and arranged in such a way that you could see all round each dress. Bliss!

When I nervously asked if it was possible to take photographs I was told yes, so long as I didn’t use flash (obviously) and only photographed the dresses, not the building itself (not exactly a hardship).

There were over 200 items in the exhibition, displayed in the reception rooms of the palazzo, and I took a lot of photographs. To save this from being the longest post ever, I’ve concentrated on just a few dresses.

First of all, the dress from the poster. This was a 1908 ball dress, made by Jenny of Paris (the designer whose 1925-28 evening dress in Patterns of Fashion 2 provided the pattern for my neglected-but-not-abandoned beaded dance dress). 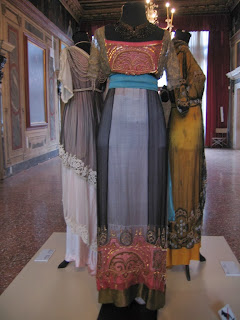 The beading was stunning. 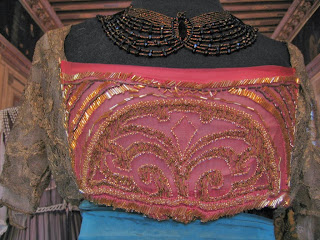 One thing which was not at all obvious from the poster was that the dark skirt does not go all the way around the dress, but is in two separate panels.

I was surprised that such a delicate fabric could support the weight of so much beading around the hem without the fabric tearing. 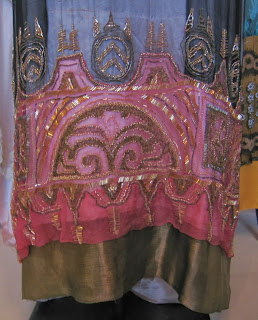 But I was even more surprised to see the back of the dress; it seemed rather cobbled together from whatever pieces of beaded fabric they’d got left over at the end! 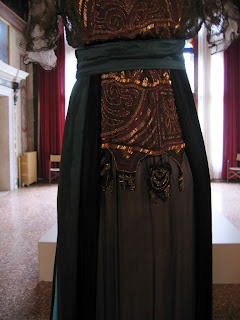 Next to this was an “Oriental” reception dress from 1913.

I loved the lines of this, and the way that the pearls were spaced out on the drapes. 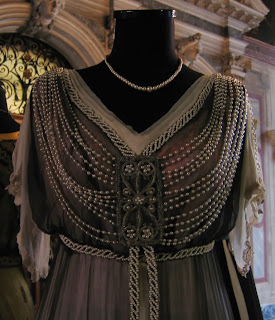 The back was just as beautifully done as the front. 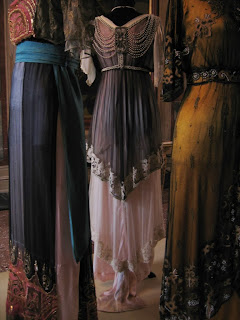 Some of the dresses in the other rooms, such as this 1913 evening dress, were displayed in glass cases, which meant that I got various annoying reflections in the photographs.

But it was still possible to appreciate the intricate details. 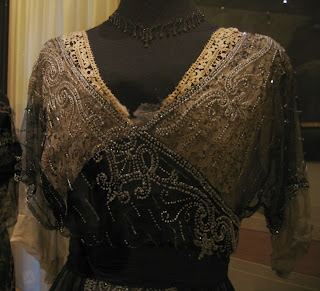 Not all the ball dresses were so sparkly. This 1912 ball dress is decorated with matte white beads, and heavy satin stitch.

Again, I wondered how the fine fabric could support such dense decoration. 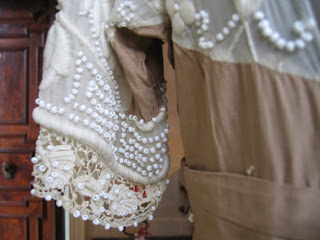 The same question came to mind when looking at the dress displayed beside it; a 1911 French summer dress of silk and tulle. 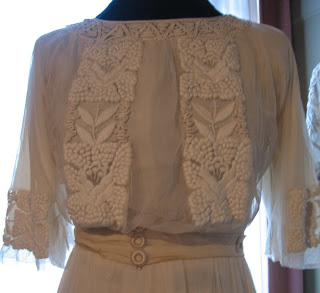 These two and the next dress were all displayed together, in such a way that I could get close up to the backs of the mannequins and examine the backs and the fastenings in detail. Not something which is often possible in exhibitions.


Sometimes it’s the simplest of details which are the most impressive, rather than elaborate decoration. That was certainly the case with this 1907 Russian day dress of silk and lace.

Yes, the lace sleeves and bodice were lovely (although I didn’t care for the single lace motif on the front). 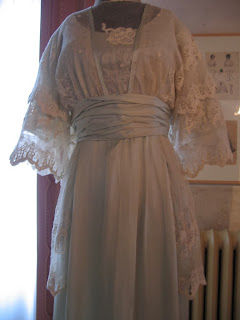 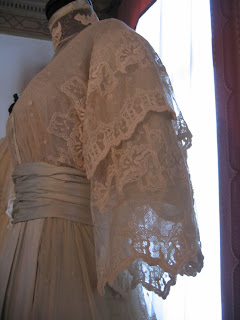 Yes, the delicate embroidery on the skirt back was a nice touch. 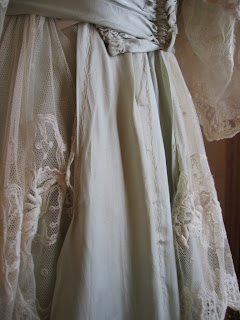 But what I really, really loved was… the hem. The overlapping overskirt with its beautiful curved edge, lying almost perfectly flat. 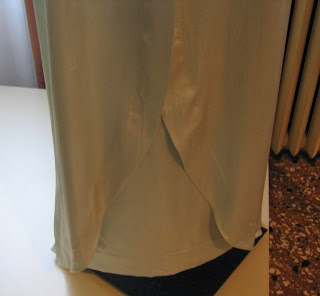 And the same smooth curve carrying on round the back. 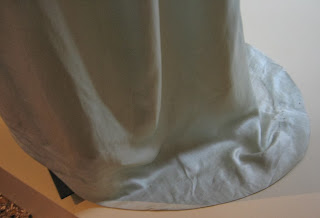 I dread to imagine how many attempts it would take me to get something that smooth!

Finally, here is the dress which, although made 15-plus years earlier, gave me the idea for painting and then beading my dance dress. Another dress displayed in a glass case, so apologies for the reflections.