A sense of proportion

Undeterred by the disappointment that was Vogue 2787, I'm going to have a crack at another vintage Vogue pattern; V8686. This is a 1933 dress, with a detachable peplum on a belt, which gives it the appearance of being a two-piece costume.

I think that the first thing to do, to avoid further disillusionment with my dressmaking, is to accept that the end result will not make me look remotely like the pattern illustration!

This improbable statistic got me thinking about pattern illustrations in general. I clearly remember going pattern shopping with my mum in the 1970s, before photographs were used in pattern books, and Mum saying firmly, "Ignore the pictures, they are always drawn far too long and thin".

In an attempt to remember the actual proportions of the human body, I turned to this recent purchase from a second-hand bookshop (yes, I know I could have looked it up online, but where's the fun in that?).


I must admit that I bought this purely for the fashions.


I'm hopeless at drawing, and it would take more than this to make me any better. But the very first illustration in the book shows how normal figure proportions compare to those used in fashion illustration, in the 1950s at least. Whereas the human body is generally considered to be 7½ times the length of the head, for fashion illustration it is 8½ times. 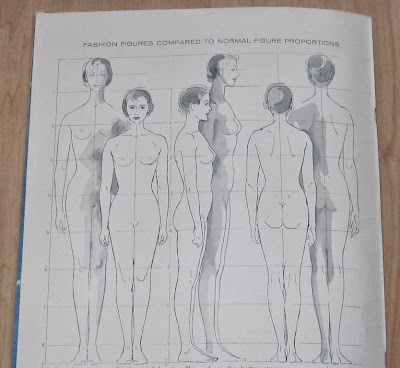 To see where the extra length is added, I measured each figure in millimetres, and compared the two. 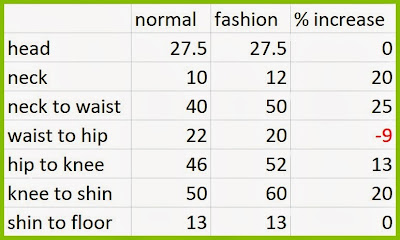 I had read somewhere that when a figure is altered for fashion illustration the waist to hip section is not lengthened, but in this example it is actually reduced, presumably to allow other sections to be lengthened without making the figure too tall.

However, the addition of one extra head length seems positively restrained compared to 1930s illustrations. Going back to the Vogue 8686 pattern illustration, and applying the head lengths calculation, produces this.


This extreme long and lean silhouette, mostly extended in the lower part of the body, wasn't just limited to Vogue patterns. The dressmaking chapter of Weldons Encyclopedia of Needlework has this measurements chart.


Out of curiosity, I measured the various sections of the illustration, and then scaled them up so that I could compare them to the 'normal' figure in "How To Draw And Paint Fashions". 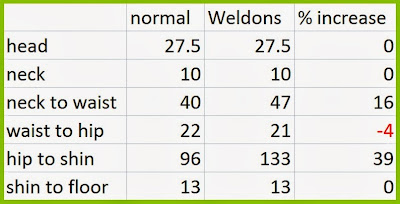 Again the waist to hip section is slightly shortened, but just look at the hip to shin comparison (it was impossible to guess where the knees should be). Almost 40% longer.

The increase in photographic illustrations in the late 1930s must have come as something of a relief to home dressmakers. Even though these were pictures of clothing for sale rather than dress patterns, at least they provided a realistic idea of how a dress might turn out. Lauren of Wearing History has collected some lovely examples here.

The widespread use of photographs on pattern envelopes should have made figure manipulation a thing of the past, but with photo editing software being so widely used now, I wondered if this was still the case. Not that altering photographic images is anything new. The 1890 edition of "London of To-Day", an annual handbook dedicated to the city and the London Season, had this to say about debutantes being photographed in their Court dress after being presented at Buckingham Palace.
"Stout people are the most difficult. They have to be fined down, and their waist rounded off in the negative."

However looking at one of my more recent pattern purchases and applying the 'head length' rule to it, the result is a mere, reassuring, eight head lengths.


So with this in mind, I'm hoping that my version of Vogue 8686 may at least look a little like the modern photograph on the Vogue patterns website.