I’ve not been able to do much sewing this week, so for today’s post I thought I’d show some of the old needlework books I’ve collected over the years. They have all come from charity shops for a few pounds, but in the last few years the supply has dried up; possibly other people have started to realise just how useful they are!

None of the three books have a publication date, but from the illustrations it’s clear that they all come from the 1930s.

Although the 1930s are usually associated with the Depression, for many middle class families with a regular income they were a comfortable time with a clear rise in living standards. In particular, with more and more homes having an electricity supply, labour-saving appliances became “must have” items.


The extra leisure time which vacuum cleaners, washing machines and the like provided led to an increased interest in pursuits such as crafts (especially making things for your new, modern home), and a number of publications appeared to cater for this interest.

First up is “The Art of Needlecaft” by R. K and M.I.R. Polkinghorne. I’ve not been able to find out much about the splendidly-named authors, but they wrote on a wide range of subjects other than needlecraft; bible stories, teaching aids and famous men and women, to name a few. The book’s cover lists the subjects covered in its 600-plus pages; dressmaking,embroidery, curtains, tapestry, knitting and crochet, rug making, weaving, basketry, raffia work, leather work, stencilling, batiks and new ideas. Phew!

There are plenty of diagrams (328 according to the frontispiece, as well as 32 “art plates”), some simple, and some more complex. 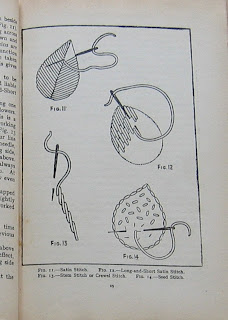 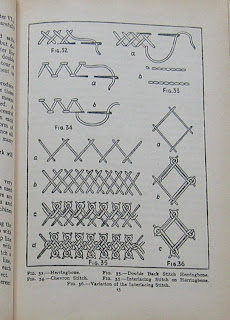 The diagrams of how to do things such as embroidery stitches are timeless, the illustrations of how to use them rather less so.

The chapter on “Indian or Coiled Basketry” prompted me to take another look at a small basket which my Granny R made, I think in the 1920s, and which I still use to hold bits and bobs.


In fact there are even more subjects covered than listed on the cover. Presumably “Plain Sewing” and “Patching and Mending” were not considered exciting enough to be listed.

The “Dressmaking” chapter assumes that the reader is working from a commercial pattern, but still includes useful information such as how to make a belt. Handy if you are making up Maudella 5151.

There is a lot of information in this book which is still useful, although I think I’ll pass on the advice about knitting “one’s own underwear”!

Next up is “Weldon’s Encyclopedia of Needlework”. Yes that Weldon’s, the people who brought you this...


This is an even bigger book; well over 800 pages, and almost 2,000 illustrations, split into six books. According to the foreword;
“You will not find the latest fads and passing fashions of a mere season in these pages. On the contrary, this Encyclopedia has been so complied that it will not date, and it will be found just as useful in years to come as it is to-day.”


Book one is ”Embroidery”, which takes up almost half of the book. While I’m not entirely convinced about the ‘not dating’ part of the foreword (see evidence above), this section does give plenty of examples of how embroidery techniques have been used in the past, with a lot of photographs of old pieces, mostly from the Victoria and Albert Museum.


The occasional modern piece does appear, such as this lovely example of how net embroidery could be used in a contemporary style. 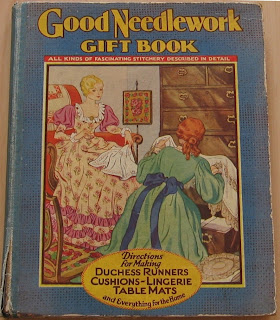 “Good Needlework” was a monthly magazine, so I’m guessing that the Gift Books were almost like a Christmas annual. Clearly they were sold more widely than just in Britain, as the book “may only be exported to Australia, New Zealand or South Africa through the appointed agent”, and details were given of how overseas readers could obtain the transfers used for many of the designs.

Whereas the other two books have plain covers (although they may originally have had dust jackets), this book has a coloured cover and frontispiece, possibly to enhance its use as a gift.


It even has some coloured pages inside, albeit only a couple of pages at a time, and in two colours.


Most of the items in the gift book require the use of transfers, although the illustrations are so clear that you could recreate the design from them if you wanted to. There are also some cross stitch designs, with the chart printed in the book. 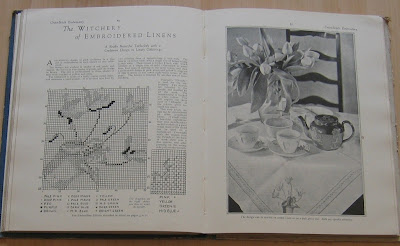 I particularly like these boxes, made by covering empty powder boxes with embroidered coloured linen. 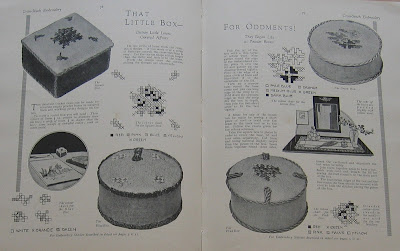 There are a few projects which do not require either a chart or a transfer, such as these organdie chrysanthemums to trim an evening dress.


There is a whole section on “Lingerie Embroidery”. The word “dainty” features heavily here – a far cry from knitting your own underwear! 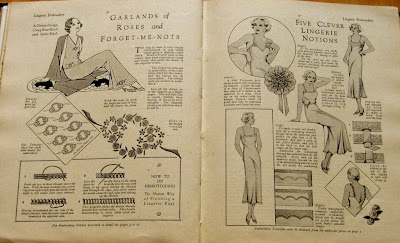 I just love the illustrations of this book, they are so redolent of the 1930s.


It’s not all lingerie and powder boxes however; there are lots of things for the home here as well, such as tea cosies, tablecloths and napkins, cushion covers, chairbacks, and even a cover for the Radio Times. 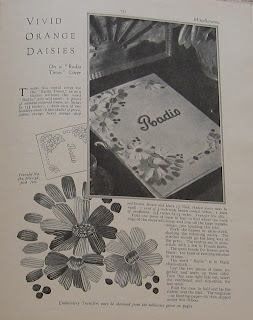 Looking at this book now, I could imagine having a go at making not just some of the items in it, but some of the dresses in the illustrations as well! 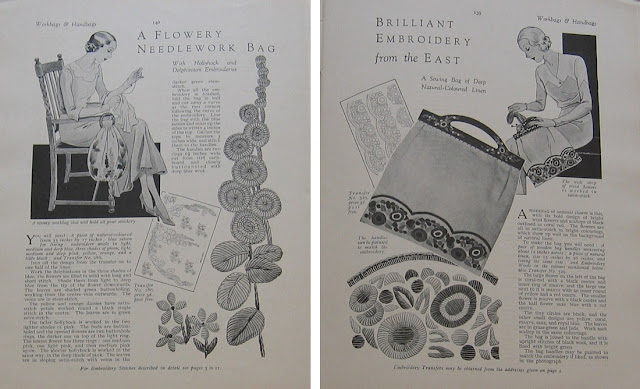