Orla Kiely: A Life in Pattern 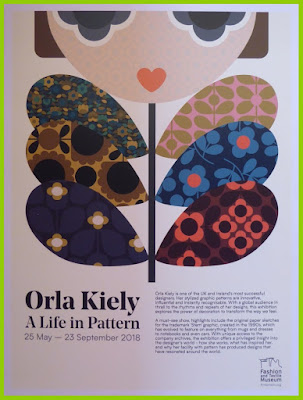 Orla Kiely: A Life in Pattern is the current exhibition at the Fashion and Textile Museum in London, and was on my list of things to visit on my most recent London trip.

The museum has been well and truly taken over; even the entrance lobby has been decorated in an Orla Kiely design.


The main part of the exhibition begins with the 'Pattern Library'; a display of some of the many  patterns which Kiely has designed over the years, along with various objects made up in them.


And there's more round the corner.


I must admit that I found the effect slightly hallucinatory. This may be because I'm almost exactly the same age as Kiely, so the 1960s and 70s patterns which she cites as a major influence in her work were also a big part of my childhood. For example, if I had seen these saucepans in any other context, I would have sworn blind that we had them at home when I was growing up!


Things don't calm down in the main hall. Entitled 'Curiouser and curiouser', this section plays with scale; displaying some of Kiely's clothing both as huge garments hanging from the ceiling, and on tiny dolls in perspex cases. There are also two towers of rotating blocks, which you can twist round to make your own mix-and-match figure.


Naturally as a dressmaker I couldn't resist the temptation to look inside the garments!


Upstairs there is a display of clothes (human-sized this time) on mannequins, and a large collection of images from publicity campaigns. Sadly reflections from the lighting made it impossible to photograph the latter.

The most striking feature upstairs however is the wall of handbags. 100 of them, arranged by colour and cleverly hung to give a regularity to the display despite the variations in size. I had to wait a long time to get a picture without anyone there, but the effect was worth it.


Unfortunately, although the effect was impressive I found myself unmoved by it, and this rather summed up exhibition overall for me. Part of the reason why I was so entranced by last year's World of Anna Sui exhibition was that it seemed to have a very strong overall Anna Sui 'look', but managed to express it in lots of different ways. A Life in Pattern seemed to be more and more of the same - although perhaps that was the intention of an exhibition about rhythms and repeats.

Decide for yourself! A Life in Pattern runs at the Fashion and Textile Museum until 23 September. Meanwhile I'm looking forward to the winter exhibition; Night and Day: 1930s Fashion and Photographs, which along with an exhibition of Cecil Beaton photographs begins on 12 October. (Cate, I'm guessing that you might be interested in this!)
Posted by Black Tulip at 18:08