How it all began

When we went to Hay on Wye last year my intention was just to browse the many bookshops, and see what turned up. I wasn’t looking for any specific books. Well, only one. Unsurprisingly, it was costume-related. However it wasn’t any of the ‘standard’ costume references such as Janet Arnold, Nancy Bradfield or Norah Waugh, or even to be found in the arts or historical sections of the various shops I visited. It was a small, slim book of only 52 pages, but it was largely responsible for my lifelong interest in historical costume, and I was quite ridiculously thrilled when I found a copy. 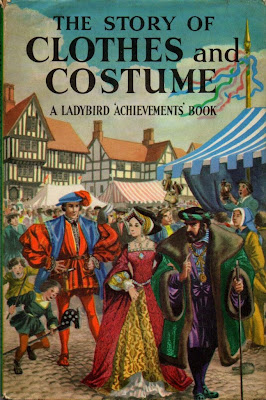 I am firmly of the Ladybird Books generation. For readers who haven’t got a clue what I’m talking about, Ladybird was a children's book imprint first created a century ago by Wills & Hepworth, a printing firm in the town of Loughborough, England. During World War II paper shortages led them to start producing hardback books in a standard format of 7” by 4⅝" (approx 18 by 12cm) and 56 pages (including endpapers), because this could be printed on a single large sheet of paper which was then folded and cut into pages without any wastage. This comfortable size for small hands became the standard Ladybird format, and over time the books came to cover an amazing range of subjects: mostly non-fiction but with classic fairy tales and learn-to-read titles as well.

I had a number of Ladybird books as a child, but “The Story of Clothes and Costume” was my favourite. Along with the others, it was given away when I got older, but when I found a copy in Hay I snapped it up. It was amazing just how familiar all the illustrations were, so many years later.

Whatever the subject, the layout of a Ladybird book book was always the same; text on the left and a full page illustration on the right. “The Story of Clothes and Costume” also has illustrated endpapers, showing male and female headgear throughout the ages.


The book begins with clothes made from furs and skins, then woven cloth, and then moves through historical periods from Roman Britain to the ‘present’ day (1964).

Many of the illustrations manage to include a range of dress, not just the clothing of very wealthy. In some cases there are separate illustrations for the nobility and the ordinary people, and the text explains the differences in what they wore.

Some of the pictures also show the differences in dress which came with age. For example in the 1913 illustration the older lady on the balcony has stuck to the early Edwardian styles of her younger days, whereas the lady on the steps is more fashionably dressed.


None of the drawings are just static representations of what people wore; there is always lots going on, and stories to be told. Looking at the book now, I realise how much the 1860s example owes to William Powell Frith’s painting The Railway Station, which made me wonder what, if anything, had inspired the other illustrations.

You wouldn’t use “The Story of Clothes and Costume” as a basis for recreating a historical costume, and some elements are definitely less accurate than others; the Cavalier lady’s bright green dress for example, although it does provide a vivid contrast to the sombre Puritan dress on the next page.


Despite this, reading the book again, I was amazed at just how much information the 23 pages of text manage to convey. Terms like ‘liripipe’ and ‘farthingale’ are all included and explained -  quite something for a book aimed at primary school-aged children.

The centenary of Ladybird Books is being marked with an exhibition at the magnificently 1930s De La Warr Pavilion in Bexhill on Sea until 10 May. “The Story of Clothes and Costume” is one of the books featured - I feel a trip down to the south coast coming on.
Posted by Black Tulip at 22:48