Vintage and historical sewing are both paused for a while, as a friend has asked me to join her in a group currently making scrubs and other items for our local NHS trust. This is proving trickier than I'd expected, mentally rather than in terms of the actual making, and I was hugely relieved to find from this post on the Sewcialists website that I'm not alone in this regard.

So, in part to remind myself that this too will pass, I thought that this week I would properly explain my 1874 project. I've briefly described the background to it (at the bottom of a long post), but here's the detail of exactly what's involved.

I'm planning to make this outfit.


I know that this illustration dates from 1874, April 1874 to be precise, because it is part of this pattern which was in that month's issue of the Journal des Dames et des Demoiselles.


I blogged about the pattern four years ago, and even traced off the pieces for the jacket. The sleeve pieces, and how they fitted together, were fairly clear.


The bodice was harder to understand, not helped by the fact that I only had the front view to go from.


Shortly after this, I applied to do my Masters, and the pattern was forgotten. When I first had the idea to pick it up again, I turned to the internet to try to understand what the back might look like. Initially found myself entirely lost in a muddle of Early Bustle, Late Bustle and Natural Form eras, but eventually I realised that I was starting to be able to tell them apart - yay! Then one evening, I was doing more research (aka browsing fashion plate images on Pinterest and idly scrolling though the ‘More like this’ option) and found . . .


This image of an 1874 fashion plate had been posted by Isabella in her (now sadly no longer updated) All The Pretty Dresses blog. Curiously though, it's not from the Journal des Dames et des Demoiselles, but from Le Moniteur de la Mode. It is exactly the same pattern, however. The purple skirt just visible on the right is the one shown in the photograph of the pattern above, and the green and brown ensemble is also on the pattern sheet.


I wonder if it was wholescale plagiarism, or if there was some connection between the two publications?

It will be some time before I tackle this pattern, however. I have no clothing from this era, so I need to make the whole lot. I am working from the inside out, so that each item I make has the correct garments underneath it. The full set will consist of:
- chemise (already made)
- drawers (already made)
- corset
- bustle cage
- petticoats
- skirt
- overskirt
- jacket (or 'casaque' as it is called on the pattern).

I might also make a corset cover if I think the outfit needs one, and I also hope to make the hat, and ideally a parasol as well. The chemise, drawers and corset are all from the Laughing Moon Mercantile pattern number 100 - Ladies' Victorian Underwear. For everything else apart from the jacket (and probably for some of the construction details of that), my starting point will be this book. 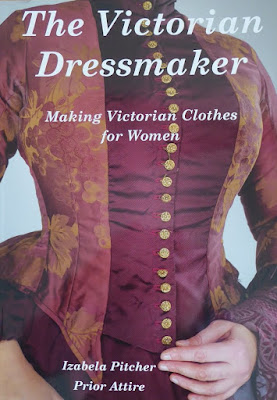 Izabela makes beautiful costumes (you can see examples of her work here), and the book is packed with useful information - I've already used some of her helpful tips while making my corset mockup.

I must admit that I'm not sure what I'll do with this outfit once I've completed it, but it will be a long time before I have to think about that!
Posted by Black Tulip at 23:00