Making clothes for the older woman

"In the world of to-day it is terribly hard for the older woman to look her best, in something that fits and suits her, is up-to-date and does not cost the earth."

"Our choice . . . suddenly contracts sharply. There are only two or three (sometimes fewer) that are any kind of fit - and that's not saying much. Of these two or three not one, probably is the colour, style and price we really want."

Both of these quotes could easily come from any number of contemporary sources; it is only the spelling of 'today' which provides a hint that they do not. In fact, they come from a book which is almost 70 years old.

Yes, my friend F has been at it again, finding another gem in the charity bookshop where she volunteers. Making Clothes for the Older Woman, by Agnes M Miall, was published in 1948. Post-war austerity is very evident in its pages, from the declaration that it is printed "in complete conformity with the authorised economy standards", to its references to clothing coupons and remodelling old clothes. It is a world away from a throwaway society; clothing and fabric purchases had to be considered with care, and made with a view to lasting as long as possible. More than once the author points out that clothes which fit badly will wear out faster than ones which fit well.

There is some information on basic dressmaking techniques such as making belts and plackets. There are also handy hints: I especially liked the idea of buying two thimbles from different manufacturers, because each one will become annoying to wear after too much use in slightly different ways, so you can swap between the two to sew for longer - especially useful at a time when domestic sewing machines were in short supply. But most of the book is about adapting bought patterns to fit older bodies (rather than fit the bright young things who appear on pattern envelopes). 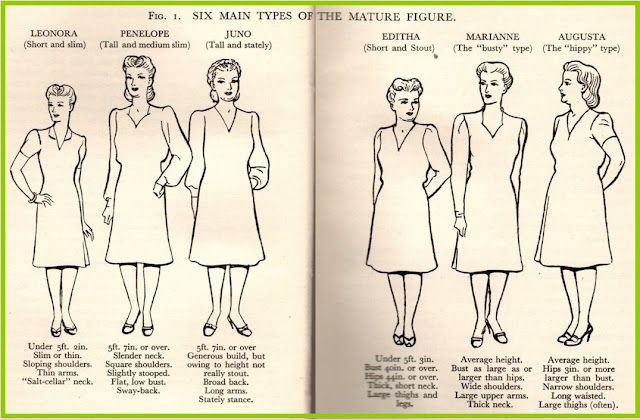 For each type there are notes on what styles to wear and what to avoid. The chapters on fitting then explain the alterations required for each type, for example, "Leonora and Penelope may need the kind effect of a little fullness over the bust".

This approach could become horribly twee, but actually it works. The overall effect is one of a cheery, no-nonsense, good friend wryly pointing out that neither you nor she have the figures you once had, but that there's still plenty that you can do to look your best. Not all of the advice has stood the test of time (for example, the idea that a puffed sleeve is a good look), and some of it is brutally honest - but isn't that what good friends are there for?

Most of the illustrations are line drawings, but still clearly explain fitting faults.


Based on the author's advice, I thought that it would be fun to go though some of my patterns from 1947 and 1948 and look for styles suitable for the different figure types.

First of all, a couple of no-nos.

"Square necks, by the way, almost without exception are unbecoming to the woman past her first youth." So that's this pattern out of contention, then.


These out of the way, I looked for something which would suit each type.

Petite Leonora "can easily look dumpy" if she wears clothes with too many horizontal lines. A dress and a full-length coat looks better on her than a suit, but if she does wear the latter then it should be "unelaborate, but not of a schoolgirl plainness". This suit with its waist detail seemed to fit the bill.


At the other end of the scale, Juno looks best in "severely cut suits" and in tailored dresses. "Diagonal lines are good", which makes her the perfect candidate for this dress.


Editha's squarish figure benefits from "button-through designs with their unbroken line all down the figure". She should wear striped fabrics, but never those with a crosswise pattern "except in small quantities for contrast". The illustration on the left ticks all of these boxes.


While these three types are either tall or short, Marianne and Augusta are average height; 5'3" to 5'7" (1.6m to 1.7m). Marianne wants to take attention away from her bust, so requires a "bodice as plain as possible, with lengthening vertical lines" and "interest concentrated on the skirt". With this in mind, she might want to make the skirt of this dress a little fuller, but the shaped pockets do add interest.


Augusta is the reverse, wanting to draw the eye to her upper half with "shoulders judiciously but not extravagantly widened, interesting collars and upper sleeves". The neck tie and unusual 'sleeves' of this dress should do the trick.


This just leaves tall, slim Penelope. As she gets older, her slenderness is in danger of becoming "scragginess" (hard to imagine this being seen as a problem in today's society). She "needs clothes that fill her out a bit, give her width in proportion to her height". Among the things she can wear are blouses with horizontal yokes, and skirts with hip yokes (which are to be avoided 'like the plague' by other figure types).

I couldn't find any vintage patterns in my collection suitable for Penelope, but the reference to the perils of hip yokes reminded me of something. Yes, Penelope might actually be the person who could carry off Simplicity reissue 1587, aka the Dress of Frump™.


Finally, I'll finish with a quote which I think all vintage dressmakers can agree on, regardless of age or figure type. "Practically all dresses look better over a slip than over just knickers and brassiere".
Posted by Black Tulip at 20:40