It’s been a few weeks since I attended these two courses at Hat Works, but I’ve just not had the opportunity to write them up, until now.

Both courses were run by Sue Carter and Marie Thornton, who also taught the excellent sinamay class. Veiling was actually the second course, but I’ll cover it briefly, as I didn’t manage to take many photos. Sue and Marie brought along lots of examples of beautiful vintage veiling for us to drool over, and admitted that the problem was that they were almost too beautiful to use – they are just taken out of their wrappings and patted from time to time!

We learned about different veil lengths and veil styles. Some people had brought along hats to veil, and we also experimented with making veils on millinery wire frames. Try as I might, I’ve not been able to get a reasonable photograph of my attempt, so that will just have to wait until it’s fully trimmed.

I’ve got some ideas for trimming however, courtesy of the first course, which was on making fabric flowers. Again, Sue and Marie brought both individual flower samples and various headpieces, so that we could see the flowers in use.

Many of the flowers we made were made using techniques from Kanzashi, the hair ornaments used in traditional Japanese hairstyles. These are made by folding squares of fabric and sewing them together. There are numerous folding techniques, resulting in different flowers.


Although the Japanese versions are often tiny, and made from silk, we started rather larger, and worked with thicker fabrics which were (mostly) easier to handle. I forgot to photograph this one with a scale, but it is approximately 10cm / 4” in diameter.


We also made cubist roses, which is what I used on my Wiener Werkstätte hat.


Here’s how they are made:

Cut four squares of fabric, and fold them in half diagonally. My squares had sides of 20cm / 8". 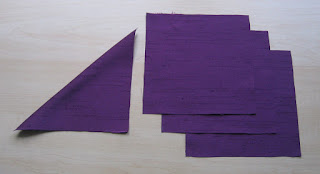 Lay the folded triangles one over the other. 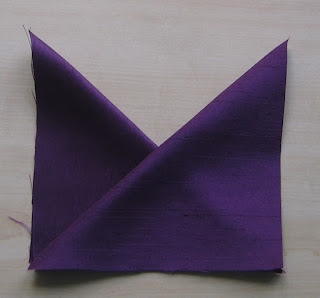 Lap the final triangle under the first one. I found it easier to pin the whole thing together. 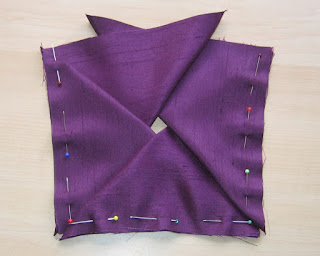 Sew around the edges with a small running stitch. 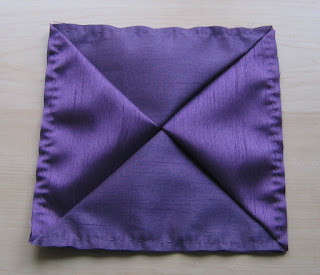 Then pull up the thread to form a ball shape. Tip: Although I sewed the whole square and then gathered it for the photographs, it is actually much easier to gather each side as you sew it.

Because of the amount of fabric to be involved, however tightly the gathers are pulled up, there will almost certainly be a hole left in the centre. This can be covered with a circle of felt.

Fold back the edges of the 'petals', and make a smaller rose to fit inside. I used a different fabric for mine, and 15cm / 6" squares. 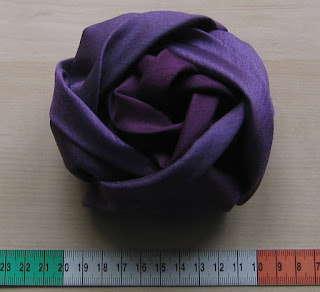 The rose on my hat has a fabric-covered compressed paper ball at the centre. For the sample I made on the course I added stamens of twisted copper wire with beads at the ends. 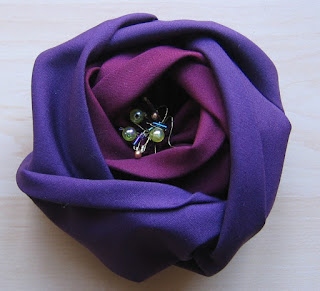