Yesterday the Chapel Stitchers got together for the afternoon, to decide on the design for the altar frontal. We'd had a lunchtime meeting previously, at which we'd discussed ideas, but this one was far more 'hands on'.

We've decided that we want look to the future, and have a contemporary design, but also celebrate the chapel's history, and the fact that it was built by the students themselves. With this in mind we have decided to work with the theme of hands. We also want to incorporate the Amber Peace Cross into the design, as this is something which is specific to the University.

The plan for the altar frontal is to have a representation of the Amber Cross in the centre, with applique hands around the sides. Some of the hands will be plain fabric, while others will be embroidered. The plan for yesterday was to create a paper mock-up, so that we could see how this idea worked in practice. Kath had created a full-size paper template of the frontal, and we already had some hand outlines which we had created by drawing round our own hands. We want to get outlines from as many of the students and staff as possible, to make this truly a community project for the University.

Members of the group set to work cutting out hands, while I scaled up the Amber Cross from a photograph. To add more interest to the design, we also had hand outlines from children in the University's creche. Then the real fun began, as we started painting! 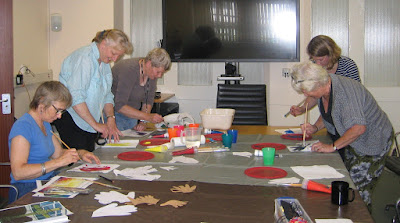 We laid the cross in place on the template first, and then started arranging the hands around it. Christine painted over the edges of the cross and then removed it, which created a lovely effect. 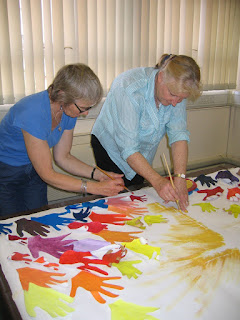 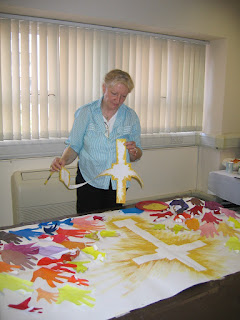 Once we'd got the hand motifs in position, it became apparent that we're going to need a lot of them! Probably around 30 on each side. 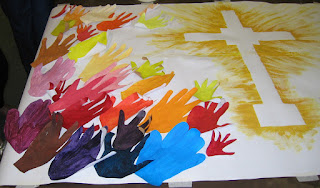 Powered by cups of tea and coffee, and the delicious home-made biscuits which Ros provided, the afternoon went very quickly. By the end we had a clear idea of what the frontal will look like. Exciting! I think that we were all really pleased with what we'd achieved. 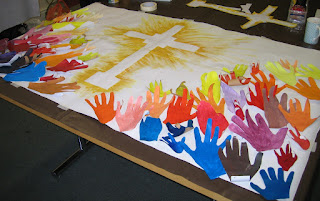 The next meeting of the group will be on Friday 4 September at 12 noon, in the usual room at Senate House.
Posted by Black Tulip at 18:26