Just before the next Historical Sew Fortnightly challenge is due, I have finally finished this one!

Having made up the ‘wood/straw’ element of my bag, it was time to start decorating it, as I wanted to do this before I started to make the bag up. My inspiration bag is decorated with felt leaves and flowers on a branch, and I wanted to do something similar, but not an exact copy.


When I was going through my collection of 1930s sewing books to post about them, I found a pair of photographs in “The Art of Needlecaft”, illustrating how to make artificial flowers in felt. As I was already planning the bag at that stage, I decided to use these as a basis for the bag’s decoration. 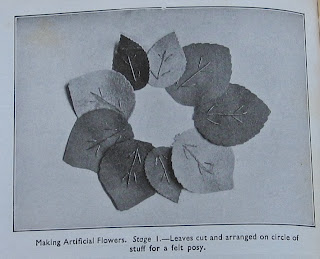 To make the leaves I traced off the first photograph, scanned it into the computer, and enlarged it to the size I wanted.


Then I traced off individual leaves, cut them out, and played about on a life-size pattern of the bag and handle.


Once I had a design that I was happy with, I cut the leaves out of felt, and attached them by embroidering the veins through both the felt and the straw backing. I had considered doing this with wool, but instead used some of my favourite Mulberry Silks threads.

I have collected quite a number of these threads over the years. A lot of them are loose spools stored in a box, but I must admit that I keep some of them in their original packets, as they just look so good!


The flowers were a little bit trickier. They are described in the caption as “small circles pinched up at the centre”, but when you look closely at the photograph, they are clearly not circles.


I decided to ignore the ‘circle’ bit, and instead cut out five-petal flowers of various sizes. I gathered them in the centres with a circle of small running stitches, pulled the gathering up, and used the tails of the gathering thread to secure the flowers to the backing. For some of the larger flowers, I added either a smaller flower or a circle of contrasting felt in the centre. Finally I finished off the flower centres with French knots, again in Mulberry Silks threads.

I never used to be able to do French knots; being left-handed I couldn’t follow a diagram for them, and they always unravelled and came out as a small stitch instead. Finally my lovely (right-handed) friend R spent an entire evening patiently working out how to translate each step of a French knot into its left-handed equivalent, and teaching me. I’ve never had any problems since, and doing them is always a wonderful reminder of her.


To make up the bag, I first lined the front and back pieces by machine-sewing a piece of cotton onto the back of each one. Then I cut a double-layer strip of fabric for the gusset, and tacked this into place on the wrong side of the front and back. Finally I cut bias strips of cotton, and bound the raw edges. There were a few changes along the way however. Originally I had planned to use red cotton, at least for the bias strips, and possibly for the whole thing. However I was so pleased with the felt decoration that I decided that red binding might detract from it, so I used cream instead. I had also planned to machine-sew the binding on, but decided that the whole thing would look better without stitches showing, so hand-sewed it.


Finally, on to the handles. These were to be attached using wide bias strips, and originally I planned to machine-sew the strip round the handle. Of course, when I actually looked at my sewing machine, I realised that there was no way that this could be done. Duh! Instead, to keep things neat, I did a line of machine stitches on the binding, then folded it round the handle and hand-sewed the sides together over the handle.


Finally I turned the raw edges under, and sewed the binding to the bag top.

It’s been a lot of work, far more of it by hand than I had planned for, but I’m really pleased with the end result. I’m even hoping that if I team the bag, in a very non-period-appropriate way, with Vogue 2787 (aka the Feed Sack Dress), it might even detract from the general sackiness of the dress!

Pattern: My own, based on this bag

Notions: Felt and silk thread for the decoration, embroidery hoops for handles

How historically accurate is it? In the end, probably not very. 20%ish

First worn: Not yet

Total cost: Four squares of felt at 70p each. Two embroidery hoops at £1.36 each for handles. Everything else from my stash. So £5.52, but with lots of felt (and two half hoops) left over.
Posted by Black Tulip at 19:59